The Inlet Rowing Club says Port Moody would be the perfect location for a high-performance training centre for young rowers looking to compete for Canada nationally and internationally.
Mar 4, 2021 7:32 PM By: Mario Bartel 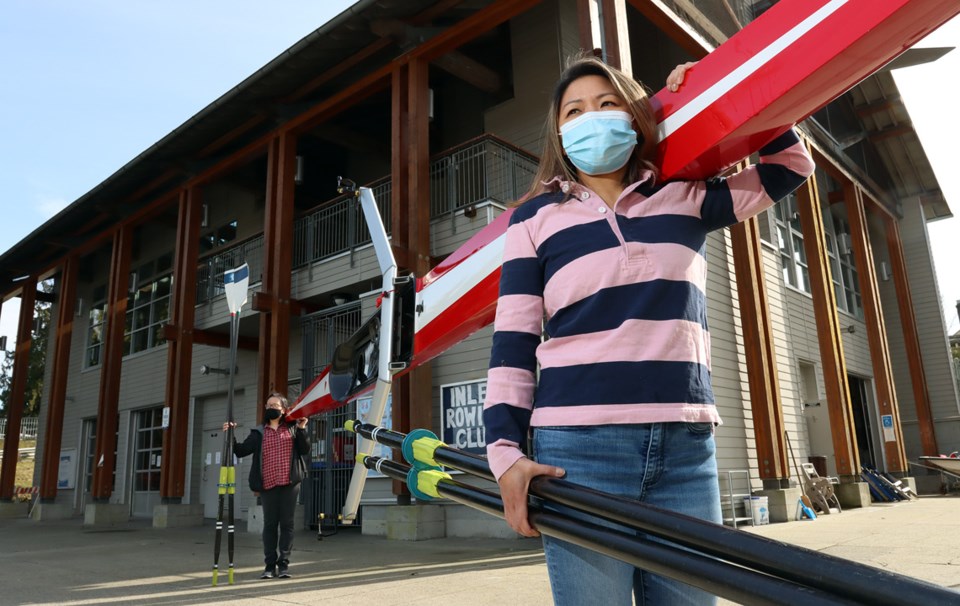 Emily Seto and Wendy Chan are hoping to attract a high-performance rowing centre that will train the next generation of national and Olympic rowers to Port Moody, where they would be based out of the Old Mill Boathouse near Rocky Point Park.MARIO BARTEL/THE TRI-CITY NEWS

Port Moody could soon have Olympic athletes of its own.

The Inlet Rowing Club is putting together a bid to become a high-performance training centre for the next generation of young, competitive rowers aiming to compete for Canada at international regattas and the summer Olympics.

It would be the first such centre in British Columbia, joining others being established or already operating across the country as Rowing Canada and BC Rowing look to boost Canada’s sculling stature.

The tiny club — it has only about two dozen members, including juniors — is up against some of the sport’s heavyweights like Victoria’s Elk Lake that is home to the University of Victoria’s rowing team and was the training base for Canada’s national team for many years, as well as Burnaby Lake, once the venue for the Canada Games and recently refurbished with a new, extended dock.

But, Seto said, Inlet’s bid has an advantage that can’t be matched by any of the others: the placid waters of Burrard Inlet. “We’ve got the best water,” she said. “It’s quiet, it’s peaceful, the water is calm. It’s a hidden secret.”

Most importantly, the Inlet is almost boundless.

Seto said rowers in training require wide open spaces to work on their endurance; turning their long craft around every 2,000 metres or so as they’d have to do in the confines of a small lake breaks their rhythm.

Inlet Rowing, however, can offer rowers a 14-km round trip from Rocky Point Park to Barnet Marine Park in Burnaby, hugging the north shore along Alderside.

Port Moody’s proximity to public transit, high schools, Simon Fraser University and Douglas College, as well as many fitness facilities nearby for dry-land training are also in the city’s favour, said Seto.

Most of the athletes will be of high school or post-secondary age, she said. Some will be from the Lower Mainland and will likely commute to the training centre, but those from further afield may end up relocating to the area with their families.

Seto said the initial group of athletes will number about eight to 12 then grow over the next several years. They’ll be competing in singles, doubles and quads.

To give the group’s bid some heft, Seto and Chan recently solicited an endorsement from Port Moody council, which heartily gave its support. “It’s an exciting prospect,” said Coun. Hunter Madsen, who was a junior rower himself. “I love the idea of seeing more sculls in the water.”

Over the next few weeks leading to the March 31 deadline for submissions, Seto and Chan will discuss logistics with other stakeholders such as the society that runs the Old Mill Boathouse where the training centre would be based as well as the Rocky Point Sailing Association that also uses the facility.

The sinewy sculls, along with other equipment, would likely be stored in a shipping container across the street, an arrangement that would have to be approved by the city.

As well, the club may have to look into expansion of the wet dock facilities at Rocky Point. But, said Seto, landing the training centre would present funding opportunities to help make that happen.

In return, Port Moody stands to gain some international recognition as the rowers begin to make competitive waves, and the club will benefit from the expertise of top young rowers and their coaches as well as the higher profile of the sport in the community.

If their bid is successful, the training centre is expected to open in September.