A new community kitchen program in Port Moody has been online since it launched last year. With public health restrictions because of the COVID-19 pandemic easing, its founders are pondering how to transform it into an in-person gathering.
Jun 12, 2021 9:00 AM By: Mario Bartel 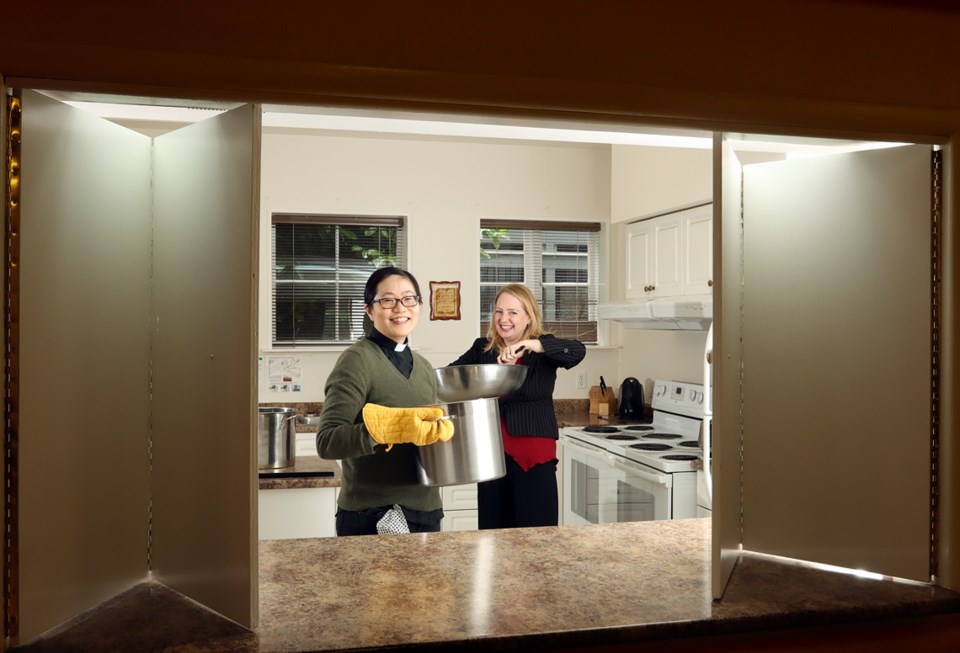 When the rest of the world was staying apart and dining on take out, Jenn Swanson and Vivian Lam were bringing people together to cook their own meals — virtually, of course.

Now, with public health restrictions easing and a return to normal life expected by the fall, the pastors at Inlet United and St. John the Apostle Anglican churches in Port Moody are trying to figure out how to transform their new Spring Street Community Kitchen from an online platform to an in-person gathering.

Or maybe they won’t.

Or maybe some sort of hybrid format, with people able to attend in the kitchen as well as in a Zoom meeting, is the way to go?

Whichever way they choose, Swanson and Lam are confident the community building and exchange of stories as well as tasty recipe ideas will continue.

The two pastors had long been pondering the idea of starting a kitchen program as a way to expand the community of their respective churches, lower the barriers to healthy, flavourful eating and perhaps even provide some meals to people who might really need them.

In fact, they saw it as a bit of a successor to some of the initiatives like Soup Sisters that had been run out of the Gallery Bistro on Clarke Street before it burned down in 2019.

But just as Swanson and Lam were set to launch in the basement kitchen at St. John the Apostle, the COVID-19 pandemic hit and the community kitchen was transformed into a kind of low-tech cooking show with the volunteer chef of the day preparing their meal over their smart phone propped up onto the countertop while others watched on a virtual meeting platform.

Lam said it may not have been the fanciest of production values, but the virtual community kitchen got the job done. Meals were cooked, stories were shared — as were laughs — and friendships were forged.

“It’s all a big experiment,” Swanson said of the monthly gatherings that usually attract up to 18 participants, but more if a “celebrity” chef like Fred Soofi, of the Pasta Polo restaurant in Coquitlam, shows up.

“It could be anything,” Lam said. “We’ll just see what sticks.”

Some of the things that got traction were a community kitchen dedicated to creative uses for a can of chickpeas, another just around Thanksgiving about turkey leftovers, and a brunch theme for Mother’s Day.

Often, the food preparation was just a catalyst for boisterous discussions about things like old food processors or ways to cook organ meats.

Remaining inclusive and welcoming to all are a couple of the goals Swanson and Lam want to preserve as the community kitchen transforms from the computer screen to the marble countertop.

“We’re low barrier for people who want to show their skills,” Swanson said. “We learn stuff about each other.”

Lam said keeping the kitchen simple will be key to its continued success — whether online or in person.

“There’s a lot of people who don’t do a lot of cooking,” Swanson added.

The last virtual community kitchen of the spring is scheduled for June 24. Then the pastors will use the summer hiatus to determine how it moves forward in the fall.

For more information, or to register to participate in a virtual gathering, go to the Spring Street Community Kitchen page on Facebook.