A public hearing will be held next week for a proposal to build strata homes on a prominent property on Burke Mountain.
Jan 21, 2021 8:37 AM By: Janis Cleugh 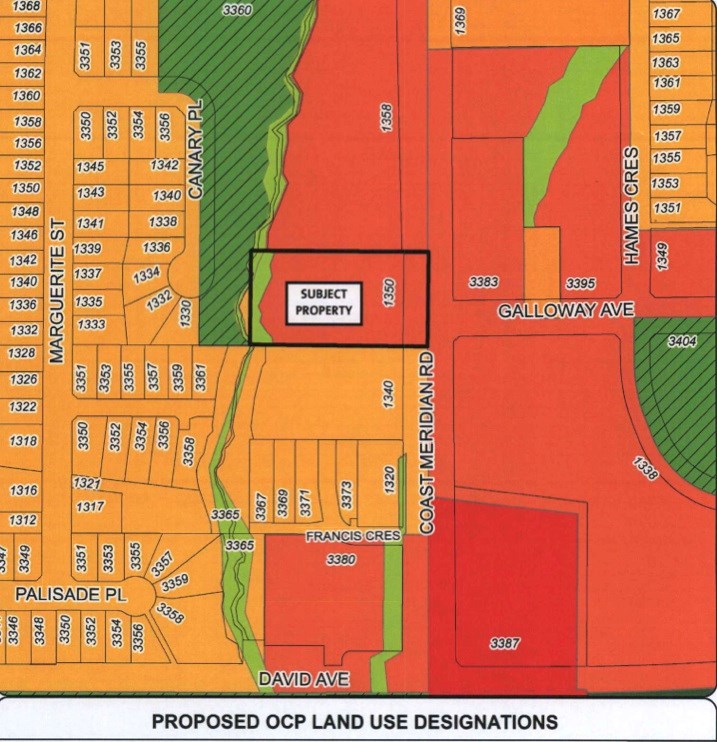 A map of 1350 Coast Meridian Rd., in Coquitlam, where a developer plans 13 strata homes.City of Coquitlam

A public hearing will be held next week for a proposal to build strata homes on a prominent property on Burke Mountain.

Monday, city council will hear about BC Dream House Builders’ application to change the land use for 1350 Coast Meridian Rd. — close to the intersection with David Avenue — to construct 13 residential units.

If approved, the bid will alter the property designation in the official community plan and the zoning. As well, the developers would be required to build Galloway Avenue (running east-west across the site) and Francis Crescent (north-south across the site) and to adhere to streamside protections in the environmentally sensitive area.

The property, located in Burke Mountain’s Upper Hyde Creek neighbourhood, which is primarily single-family houses, is across the road from a derelict home that’s been boarded up for years, said Mayor Richard Stewart at council’s Jan. 11 meeting.

Stewart said the proposed property is also north of a corner lot that had multiple environmental challenges when it came before council years ago, “back when single-family homes seemed dense” on Burke Mountain.

Habitat for Humanity also leases a nearby site from the city, said Andrew Merrill, Coquitlam’s director of development services.

For 1350 Coast Meridian Rd., BC Dream House Builders wants to put up 13 stratified street-oriented village units on the 48,553 sq. ft. site. Four trees will be pulled for the development while a restrictive covenant will be placed on the remaining trees to protect the roots that extend beyond the riparian boundary for Watkins Creek.

BC Dream House Builders consulted twice with neighbours, the latest ending last November. In 2018, the Northeast Coquitlam Ratepayers wrote to council to oppose the plans at that time; the group, under president Jim McNeil, reiterated its opposition in a letter two months ago.

“These increased density requests are made in light of, and in addition to, the already targeted 60% overbuild of the original NECAP [Northeast Coquitlam Area Plan] OCP-designed population target of 25,000; multi-year waits for a basic commercial area; and half-decade waits for a high school and recreation centre,” McNeil wrote to council.

Still, if the plans go ahead, the city will receive $338,000 in development cost charges and $62,600 in community amenity contributions, the latter of which will pay for the extension of Galloway and Francis for local road access to the site directly north at 1358 Coast Meridian Rd., Merrill wrote in his report.

Coun. Bonita Zarrillo opposed first reading of the bylaws after inquiring with staff about the timing of a provincial riparian report, which is now being updated.

“Staff do not anticipate there to be any issues with this; however, this is a condition of the Watercourse Development Permit, which must be finalized prior to council’s considerate of fourth and final reading,” Merrill wrote in his report.

• The public hearing for the proposal at 1350 Coast Meridian Rd. will be held Jan. 25 at Coquitlam city hall. Register at coquitlam.ca/728/Public-Hearings to speak via Zoom.

New Coquitlam neighbourhood in the works for Burke Mountain
Dec 21, 2020 11:26 AM
Comments