The Healing Spirit House is now populated with young, short-term patients at the historic site in Coquitlam.
Mar 19, 2019 11:18 AM By: Janis Cleugh 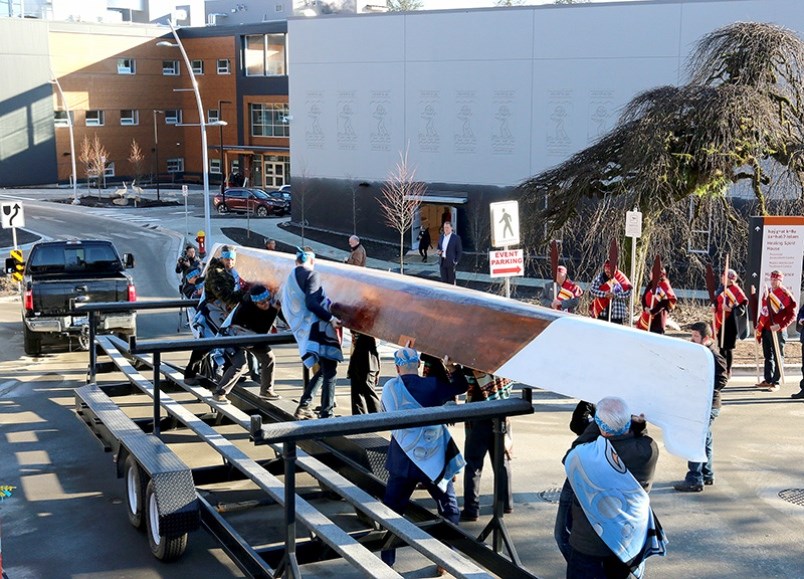 A Coast Salish canoe is carried into the new Healing Spirit House, at Riverview Hospital in Coquitlam.MARIO BARTEL/THE TRI-CITY NEWS

The master plan for the 244-acre Riverview Hospital site may be on hold but the grounds' landlord and the First Nation that is making a land claim for the property — as well as the city of Coquitlam — have made extensive servicing upgrades to and around the site over the past year to prepare for its future.

Last week, the city’s Riverview Lands advisory committee heard from officials with BC Housing, which has managed the historic property since 2015, and the Kwikwetlem First Nation (KFN) about recent infrastructure changes and accommodations for people with mental illnesses.

Last month, KFN dedicated a canoe at the Healing Spirit House, a new 38-bed short-term facility that now has patients being cared for under three provincial programs:

• Maples Adolescent Treatment Centre (Ministry of Children and Family Development) for youths between the ages of 12 to 17 who have mental health challenges or “troubling behaviour.” Youth in the criminal justice system who are found unfit to stand trial may also have a place there;

• Complex Care Unit (Ministry of Children and Family Development) for children and teens between the ages of seven and 18 who have health, developmental and/or behavioural needs that affect their daily life;

• and the Provincial Assessment Centre (Community Living BC) for referred patients 14 and older with developmental disabilities as well as mental illnesses or behavioural challenges.

All three facilities are now being relocated from 3405 Willingdon Ave. in Burnaby to the Healing Spirit House — or y – həy̓χʷət kʷθə šxʷhəliʔ leləm — at 2721 Lougheed Hwy., Coquitlam, with the Complex Care Unit transition happening Sunday.

The Healing Spirit House adds to the number of patients on the Riverview grounds. Currently, there are 180 people being cared for in the cottages and residences; however, with the opening of the Centre for Mental Health and Addictions, in late 2021, that number will grow to 285 patients, said Lauren English, BC Housing’s director of land development for Riverview Lands.

Besides the two new buildings, a number of capital projects are also underway or have wrapped up to service the northern precinct of Riverview, where the two buildings are.

Among them, a city rebuild of Lougheed Highway — between Orchid Drive and Pitt River Road — that’s scheduled to end this spring; new roads, sidewalks, streetlights and utilities; and a new multi-use path that the city hopes to eventually link with the Coquitlam Central transit hub, on the west side of Lougheed.

Wayfinding signs at Riverview are also being translated to include hən̓q̓əmin̓əm̓ — a Salish language traditionally used by the KFN — while band members and archaeological consultants are on site whenever ground is turned. Aleck said some artifacts have been found intact, including cooking tools, scraping devices and a ceremonial bowl.

English said building and roof repairs continue on some of the 75 structures, a few which are home to 16 commercial tenants. Still, security remains a issue, with vandals targeting the buildings daily. “It’s something that keeps us busy,” she said of the break and enters, most notably at the iconic West Lawn building.

As for the next round in the master planning process, English said BC Housing is waiting for direction from the provincial government; three information sessions are scheduled for public input in the second phase.