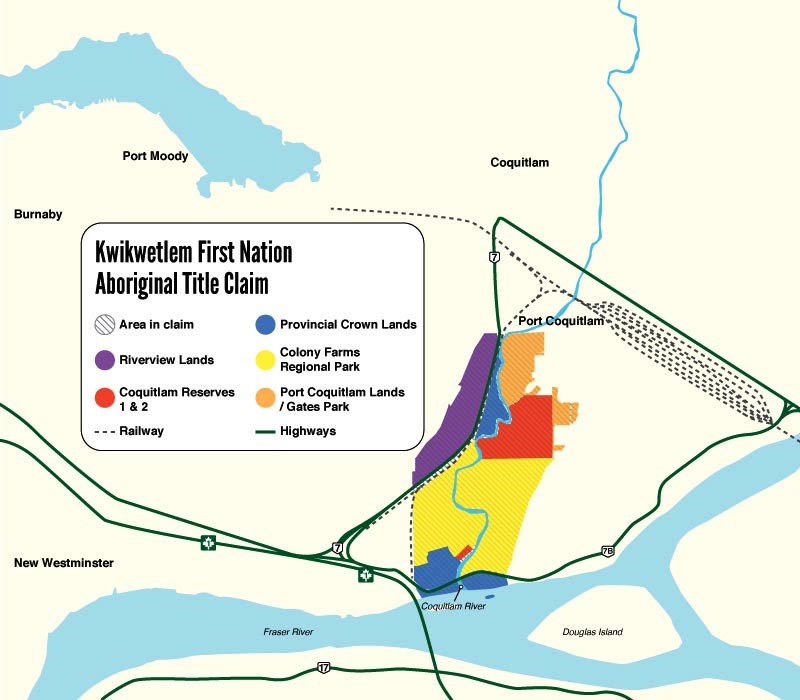 The lands as they have been identified in the KFN land claim suit.Kwikwetlem First Nation

The Kwikwetlem First Nation has filed an Aboriginal title claim for a small but highly significant portion of its traditional territory that includes the Riverview Hospital and Forensic Psychiatric Hospital lands as well as Colony Farm Regional Park and part of Gates Park in Port Coquitlam.

The claim is for just 1% of Kwikwetlem's territory, which covers much of the Coquitlam watershed.

But the band says it's the heart of that territory, near the confluence of the lower Coquitlam and Fraser rivers, that is critical for the Kwikwetlem, and for which they have filed the claim in B.C. Supreme Court.

"Our territory has been developed by many other users without our community having an appropriate role in the decision making," said Kwikwetlem Coun. Fred Hulbert. "We've tried many ways to assert our rights and title over the years and we believe this claim is the next appropriate step."

Hulbert said increasing development on the claimed lands has left the Kwikwetlem with "little space to exercise our right to fish, to hunt, to harvest and to perform our traditional ceremonies and use our resources in a way that is in keeping with our culture and traditions."

SIGNIFICANT LANDS
Kwikwetlem's territory sits in an urban and rapidly growing region of Metro Vancouver but the lands being claimed are particularly significant.

Since the 100-year-old Riverview Hospital closed in 2012, the 244-acre site has been the subject of a revisioning process by the provincial government. In December, the province unveiled a draft plan that includes mental health facilities, a commercial centre, public amenities and housing.

But a Kwikwetlem statement that was attached to A Vision for Renewing Riverview clearly stated the band's objections to "the continued use or expansion of health services and/or facilities… without the express prior consent of the KFN."

They also outlined expectations for "significant financial accommodation for redevelopment that is not in-step with KFN principles, objectives and interests of the site," and to own some or all of the commercial businesses on the site.

"Just like any urban nation, their territory has seen lots of development," said Karey Brooks, the Kwikwetlem's lawyer. "But in none of those decisions about using the land… did the province seek the consent of the nation or consult with the nation about planning or managing how those lands would be used.

Coun. Hulbert said the nation informed the province in 2012 that, based on their "strong title claim," they expected to be "meaningfully involved" in any redevelopment plans.

"But the province is proceeding with its own plans," Hulbert said, adding that the government didn't honour a commitment to make the Colony Farm lands available for the Kwikwetlem to purchase before it was made a park.

Colony Farm Regional Park, a 647-acre parcel of trails, wetlands, community gardens and other amenities, is located between the band's two reserve areas. Operated by Metro Vancouver since it was dedicated as a regional park in 1996, it is home to 200 species of birds and other wildlife, and is a popular walking and bird-watching location.

Metro Vancouver only received the notice of civil claim Wednesday and the regional authority's legal team has yet to go through it in detail, said Carol Mason, Metro's chief administration officer, but will be expected to defend its position in court at some point.

"We will be taking a look through the document very carefully," Mason said.

But she pointed out that Metro Vancouver has an ongoing relationship with Kwikwetlem First Nation — "We consult with them on activities that take place on the farm and in our watershed" — and she doesn't expect the claim will have any impact on activities.

"At the current time, our activities would continue as they are established through the regional parks function," Mason said.

"The history of land use in the area has excluded the nation from participating in how the lands will be used and as further development is contemplated the nation is bringing this claim to ensure their title and rights are enforced," Karey Brooks, the Kwikwetlem's lawyer

Kwikwetlem's land title claim also includes Gates Park, a 38-acre parcel that includes public tennis courts, soccer fields and access to the Traboulay PoCo Trail, and the city of Port Coquitlam is specifically named in the suit
Laura Lee Richard, PoCo's acting chief administration officer, said the municipality is working with the province and Metro Vancouver to determine the next steps.

"Gates Park is highly valued as a city-owned public park and its retention as such is a priority," she said in an email. "It is business as usual at Gates Park and all existing services and activities are continuing."

She added that the city is seeking legal advice to better understand the claim.

That decision awarded aboriginal title over a large swath of land in B.C.'s central Interior and, while it said the provincial and federal governments can regulate economic activity on such titled land, they must gain consent from the affected group.

It was the first decision of its kind in Canada and gave the Tsilhqot'in "the right to use and control the land and to reap the benefits flowing from it."

The band's lawyer said the Kwikwetlem's case is slightly different — it's a small, urban band and the claim area is much smaller — but they are hoping for a similar outcome.

"These are lands that are of high significance and importance to the nation historically, culturally and currently," Brooks said. "The history of land use in the area has excluded the nation from participating in how the lands will be used and as further development is contemplated the nation is bringing this claim to ensure their title and rights are enforced."


NO CHANGES TO RIVERVIEW PROCESS

The Kwikwetlem first announced their intention to claim aboriginal title to the Riverview lands in the summer of 2014, with an eye to leading future development on the site.

At the time, Chief Ron Giesbrecht said the band intended to pursue the "highest and best use" for the land and to maximize benefits to the Kwikwetlem as land owner.

But two years ago, the provincial government had a different take on the matter, saying the recent Tsilhqot'in decision would not apply to the Kwikwetlem because there had not been a declaration of title to a particular piece of land. An agreement had been established, the province added, that would enable consultation with the Kwikwetlem on the future use of the Riverview lands.

"We recognize that Riverview has an historic value to the Kwikwetlem First Nation," Coleman wrote in an email to The Tri-City News. "BC Housing has an excellent relationship with the KFN, they have been actively involved from the start and will continue to be engaged with us throughout the process.

"We negotiated a protocol agreement in advance of the visioning process and we continue to work closely regarding the future development of Riverview."

Asked how the Kwikwetlem's claim would affect the way the province engages with the band in the redevelopment process, Coleman wrote, "BC Housing expects that its approach to First Nations engagement and our respect for aboriginal title will lead to a mutually beneficial arrangement with the KFN.

"We are committed to moving forward with plans for Riverview in a way that honours the cultural ties to the lands and provides opportunities for their members."

Coquitlam Mayor Richard Stewart said the city was aware that the Kwikwetlem First Nation was considering filing an aboriginal title and Charter claim with the Supreme Court.

"It doesn't change very much," he said. "This is obviously between the band and the province."

Stewart said he doesn't believe the title claim would impede the process.

"I don't know that it complicates things," he said. "It is one of the realities with that parcel of land… Crown land is subject to these realities."

If Kwikwetlem is successful, Brooks said, they are seeking a declaration that any titles be transferred to the nation.

"Aboriginal title lands generally give a number of rights to the nation," she added. "They get rights to occupy the land, decide how the land is used, enjoy the economic benefits from the land and manage and use the land."
Whether or not the claim is successful, it will nonetheless be a bargaining tool in the Riverview redevelopment process.

"We are willing… to work with local governments to ensure we gain ourselves an equal partnership in the matter and will be fully recognized within our treaty and rights," Hulbert said.

Added Brooks: "We hope this brings some sharp focus to the government's mind about involving the Kwikwetlem in redevelopment plans, and using this consent-based decision making model in making those decisions."

— With files from Gary McKenna and Diane Strandberg