A section of a walking trail next to the Capilano River collapsed in a landslide Wednesday afternoon.

Police are warning people to stay away from the slide area, which took out an approximately 10-metre stretch of the Capilano Pacific Trail south of Moyne Drive near the Capilano Suspension Bridge sometime Wednesday morning.

Metro Vancouver Parks staff were first notified of a slide in the area at about 10:30 a.m. Wednesday.

Officers who arrived on scene checked to make sure nobody had been caught in the slide, said Goodmurphy. A police helicopter called in by the RCMP also flew over the slide area and down the Capilano River to check for anyone in distress. Fortunately there were no signs anyone had been harmed.

Municipal parks staff from the District of West Vancouver and third-party engineers are still assessing the damage.

The cause of the slide isn't yet known, said Donna Powers, spokeswoman for the municipality.

The trail was closed for repairs in early November and reopened Dec. 16.

Powers said so far there's no indication the recent repairs triggered the slide or if the slope failed further down from the repaired area.

The slide came a day after a winter storm brought intense rainfall to the North Shore.

Powers warned the slope is still unstable and hazardous, and the public should not  go past the fencing blocking the trail.

The trail is now closed until further notice. Detour information for hikers is expected to be posted soon by the municipality. 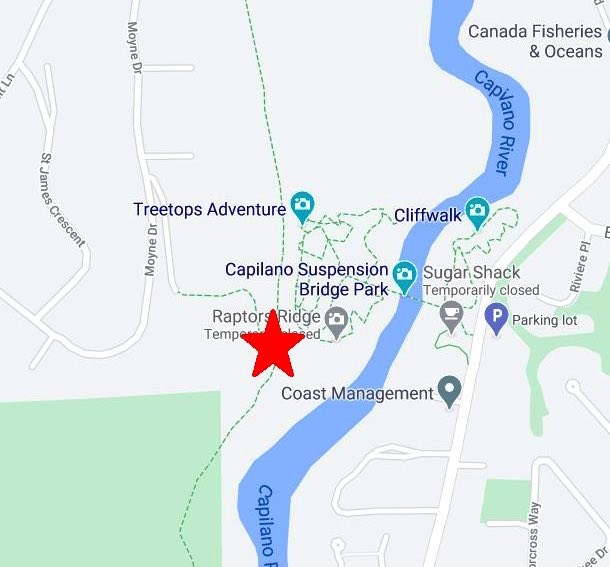 A section of a walking trail next to the Capilano River collapsed in a landslide Wednesday afternoon.. image courtesy WVPD