The Huawei executive lost a challenge of double-criminality, which means that the conduct Meng is accused of in the United States – which includes fraud, money laundering and violating U.S. trade sanctions against Iran – has been deemed as an arrestable offence had it happened in Canada
May 27, 2020 11:11 AM By: Chuck Chiang 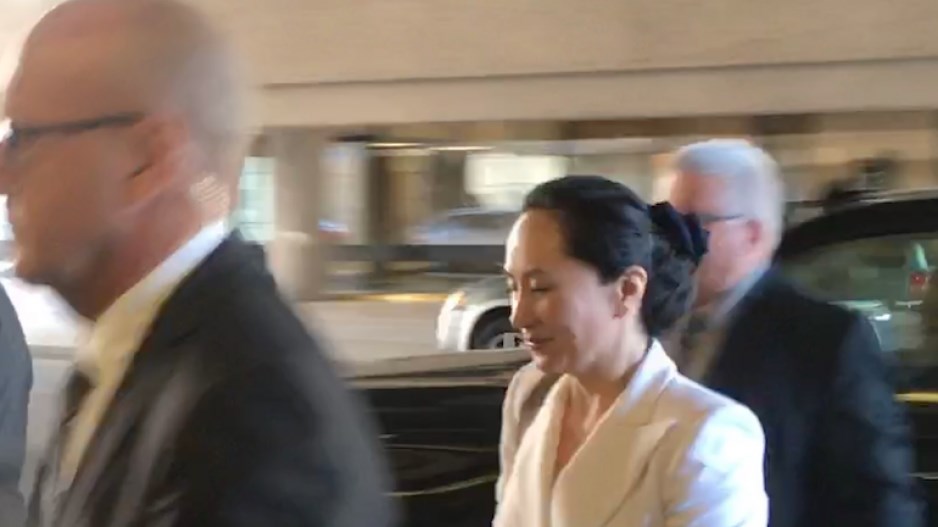 The extradition hearing process for Huawei Technologies Co. Ltd. CFO Meng Wanzhou will continue after the judge presiding over the case ruled that Crown prosecutors met the requirement of double criminality.

The decision means that the conduct Meng is accused of in the United States – which includes fraud, money laundering and violating U.S. trade sanctions against Iran – has been deemed as an arrestable offence had it happened in Canada.

The proceedings will now continue with its next scheduled date on June 3, where a case management hearing will be held to set up the schedule for future dates on issues like abuse of process and additional evidence requests from meng's defence team.

In her decision, B.C. Supreme Court associate justice Heather Holmes concluded that “the effects of the U.S. sanctions may properly play a role in the double criminality analysis as part of the background or context against which the alleged conduct is examined.”

Meng’s defence had argued in court that all of the U.S. charges stem from Meng and Huawei’s alleged violation of the Iran trade sanctions, which means that – since Canada is not a party to these sanctions – the allegations do not constitute an arrestable offence in Canada, which is required for extradition.

The argument centres around U.S. allegations that Meng lied to a bank, HSBC, in 2013 about Huawei’s relationship with Skycom Tech Co. Ltd., a company operating in Iran. The U.S. alleges that the misrepresentations led to HSBC coordinating a US$1.5-billion syndicated loan to Huawei in August of that year, as well as providing a framework for an additional $900-million credit facility.

A Reuters report in 2012 had linked Skycom to Huawei, leading to the 2013 meeting between Meng and HSBC – where Meng, U.S. authorities say, assured the bank that Huawei’s Iran operations complied strictly with U.S. laws.

Meng’s lawyers argued that such behaviour would not be criminal if transposed to Canada, since a person making a false statement in Canada to a Canadian bank about Huawei’s relationship to an affiliate in Iran – leading to that bank continuing financial services to Huawei – would not violate any Canadian sanctions.

That approach, Holmes said, was problematic.

“The difficulty with this approach is that it unduly isolates each of the specific facts said to comprise the overall fraud,” Holmes wrote in the decision. “... For an offence such as fraud, the ‘conduct’ to be considered as though it took place in Canada, must, in my view, have a more general scope than Ms. Meng’s position would allow it.”

She cited examples where, had a fraud case taken place in Canada, Canadian law would look beyond international boundaries to “encompass all the relevant details that make up the factual matrix.” Since Canada’s legal system could be relying indirectly the effects of U.S. law in such cases, Meng’s case should be no different, Holmes said.

“Ms. Meng’s approach to the double criminality analysis would seriously limit Canada’s ability to fulfill its international obligations in the extradition context for fraud and other economic crimes,” Holmes concluded. “The offence of fraud has a vast potential scope. It may encompass a very wide range of conduct, a large expanse of time, acts, people and consequences in multiple places or jurisdictions.’

Holmes also dismissed Meng’s claims that allowing double criminality to stand in this case would help the enforcement of foreign laws – in this case, American laws - in Canada that’s “offensive” to Canadian values. Holmes noted that the U.S. sanctions against Iran at the time of the HSBC-Meng talks are “not fundamentally contrary to Canadian values in the way that slavery laws would be, for example.”

The judge noted as well that the federal justice minister is required to refuse a surrender order for extradition if such an order is “unjust or oppressive.” Since Ottawa issued no such refusal in Meng’s case, it gives the Canadian legal system further protection against the possibility that an unjust, oppressive foreign law was enforced in Canada in this case.

The decision also made clear it is not presenting of the U.S. allegations against Meng and Huawei as fact, but for legal analysis that resulted in Wednesday’s announcement.

The case will now move on to the next argument, where Meng is requesting more evidence from the RCMP and the CBSA on the nature of the Huawei CFO’s arrest in Vancouver in 2018 after three hours of interrogation and evidence collection without the reading of rights.