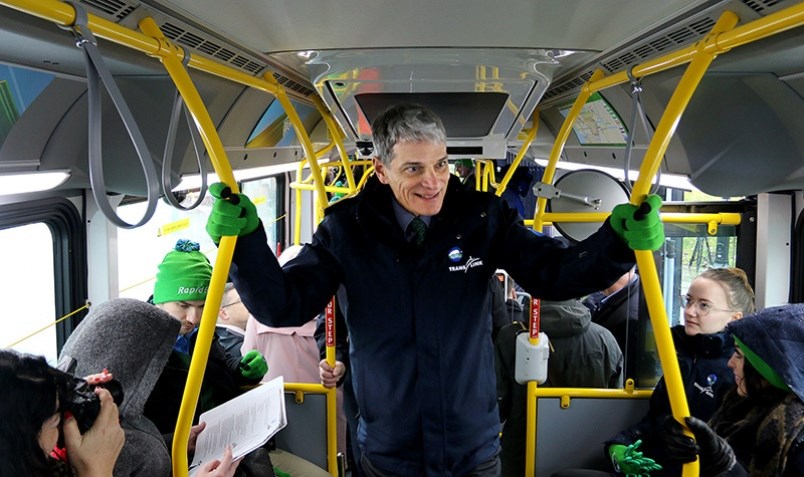 Metro Vancouver drivers opposed to mobility pricing might want to buckle up.

Despite local pushback in recent weeks, outgoing TransLink CEO Kevin Desmond says charging fees to motorists depending on areas of the region they’re trying to access shouldn’t be dismissed.

“It's something we've got to continue to examine, but in a policy environment: What are your policy objectives? Where do you want to be in the future? What's the best way to get there? And what are the other options to achieve those policy objectives?” he said during his final inaugural address Thursday (November 5) at the Greater Vancouver Board of Trade (GVBOT).

“In my view, mobility pricing needs to continue to be part of the conversation.”

The idea received pushback from business interests opposed to the City of Vancouver taking on the initiative without a regional strategy.

Mobility pricing is aimed at both easing congestion on roads as well as reducing emissions from vehicles that are often on the roads due to convenience rather than necessity.

“There's just no space to build enough roads to accommodate that kind of traffic increase. That's a reality.”

The CEO also outlined the challenges TransLink faced at the outset of the pandemic, noting the transit authority was initially “bleeding revenue” to the tune of $75 million a month as ridership plummeted by 83%.

“It was an existential crisis for us, certainly in terms of our funding going forward,” he said.

Since then, ridership has been climbing upward as more people return to work following the initial lockdown.

But Desmond said his organization has been focused on examining the future of work as many people who previously relied on transit now find themselves working from home.

“It's going to have a profound or potentially profound impact on transit demand and our network planning,” he said during the virtual GVBOT address.

“None of us know how lasting these effects are going to be, but we have to be looking forward now. We have to understand how to be resilient in the face of the near term, as well as the longer-term potential changes associated with that.”

So far the provincial and federal governments have committed $644 million to assisting TransLink during the pandemic by March 31, 2021.

The transit authority also plans to reduce its own 2020-21 fiscal costs by $135 million to further close funding gaps.

While planned service expansion for next year has been cancelled, TransLink aims to have 100% of all its pre-pandemic service operating in 2021.

Desmond cautioned the concern moving forward is that former transit riders become too reliant on vehicles they might now be using to get to work.

“We know traffic's going to come back. Nature abhors a vacuum so if there are spaces on the roads, cars will fill them up,” he said.

“We don't want to fall back into a trap where more and more people lose the habit of using other modes to get around and revert to their single-occupant car. That will ultimately also undermine the economy and our overall quality of life.”

TransLink is also keeping its eye on the potential impacts the rise of driverless vehicles is expected to have in the coming years.

Most experts conclude the future of automated vehicles won’t be dominated by private individual ownership, but by fleets of cars operated by transportation giants such as Uber Technologies Inc. and Lyft Inc.

The assumption goes that widespread adoption of such services would drastically reduce the cost of transportation to the point that private vehicle ownership would also significantly decrease.

Meanwhile, driverless vehicles would be able to communicate with each other on the roads more effectively and greatly reduce the number of accidents as well as traffic bottlenecks.

“We've got to be thinking about what the good and the bad of those that disruptive event is going to be. On the one hand, it should open up the door for facilitating abundant access to shared vehicles. We need to make sure that it's available to all walks of life, so social equity needs to be a big part of that,” Desmond said.

“But we also have to guard against the negative side of that. Is a proliferation of robot cars just clogging up our streets? One thing we know, though, this is going to be disruptive, and we need to think smart now about how to best use the streets that those automated vehicles are going to be operating on.”

As for what comes next in Desmond’s career upon returning to live south of the border: “I don’t know,” the transit executive said.

“I've been in the transit industry for a long time now. It's a crazy, but challenging, frustrating, fascinating, and at the end of the day, incredibly rewarding business because we serve people.”