A recent Angus Reid Institute poll found 38% of B.C. residents feel that restrictions “don’t go far enough.” while another 48% say the restrictions have been “about right.”
Aug 13, 2020 1:49 PM By: Stefan Labbé 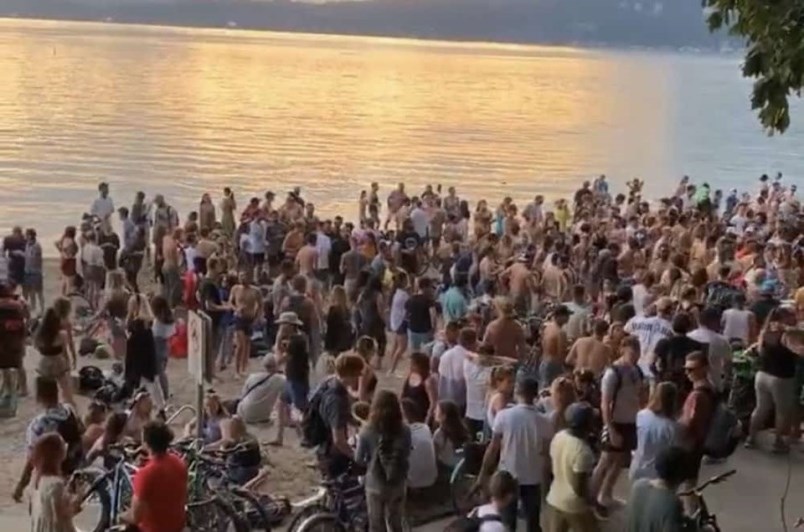 A party that popped up around a drum circle on Third Beach in Vancouver in July was harshly criticized for flaunting mass gathering and physical distancing rules. As cases rise across the province, private parties are increasingly under the eye of public health officials.@SCHAAPTOP / TWITTER

More than a third of British Columbians say they would like the government to impose tighter restrictions to dampen the transmission of COVID-19.

That’s according to a recent Angus Reid Institute poll, which found 38% of B.C. residents feel that restrictions “don’t go far enough.” Another 48% say the restrictions have been “about right.”

Across Canada, the pollster found only Manitobans (40%) felt more needed to be done to tamp down the virus.

Residents of Quebec and Alberta, on the other hand, were the most likely to say their provinces’ restrictions were too harsh.

Men over 55 were more likely to disagree with strict public health measures.

When asked about their opinion on the performance of their premier, British Columbia (74%), Quebec (74%) and Ontario (75%) had the most favourable view of their leaders.

B.C. premier John Horgan’s favourability rating has dropped eight points from a high of 85% in mid-April, but still remains significantly higher than most provincial leaders.

Active cases of COVID-19 have surged in B.C. in recent weeks to levels not seen since April.

Many of those cases have been attributed to younger British Columbians attending private parties, a trend that prompted Horgan to threaten stricter enforcement for those not adhering to provincial health and safety guidelines.

The survey polled 1,511 Canadian adults from Aug. 5 to Aug. 8 and carries a margin of error of plus or minus 2.5 percentage points.