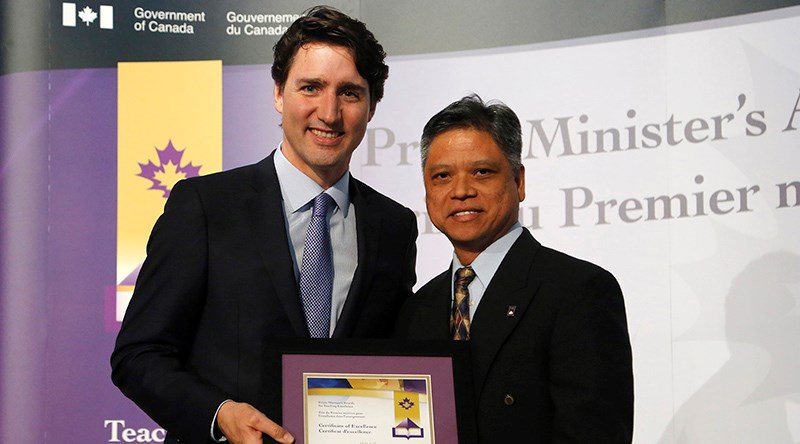 A Port Coquitlam teacher is walking on air after several days of pomp and ceremony in Ottawa last week when he was honored with one of 10 national teaching awards by Prime Minister Justin Trudeau.

"It goes without saying that I didn't get into the profession to get a prize, but to get validated and recognized in such way, especially coming from parents, is more than I can be thankful for," Emmanuel Escueta said during an interview from Ottawa, where he was still reeling from the excitement of winning a Certificate of Excellence with the Prime Minister's Awards for Teaching Excellence.

On Friday, Escueta was in the capitol city with his family taking in the sights and visiting the parliament buildings. But it was the experience meeting the other award-winning teachers, hearing their stories and visiting with the PM that had him reeling with excitement. The recognition comes with a $5,000 award to be shared with Irvine elementary school where he teaches.

"It was an unbelievable, invigorating, inspiring, humbling experience to see what the other educators are doing. I'm like floating on air."

Escueta, who is a Grade 3 French Immersion teacher at Irvine, was nominated by parent Jovita Kleim.

In his nominating papers, Escueta was recognized for his Verbathon — a relay for teaching kids their French verbs — which has spread across the country, his multi-cultural teachings in which he teaches students to sing Christmas songs in three languages and play traditional Filipino instruments, and for introducing Kidspiration, which helps students write speeches in French, with one Grade 2 student winning a district French speech contest, as a result.

Escueta, who was 16 when he came to Canada from the Philippines in 1981, said he was initially discouraged from learning the French language, but persevered, and now embraces a teaching style that helps kids recognize their own potential and act on it.

"I don't deny them a chance," he said, describing his teaching practice, developed through his recent masters' degree studies, as based on the Infinite Principle, (Inclusive, Fun, Interactive, Integrated, Team Work, and Empowerment.

"There's just too many horror stories of people listening to other people saying they don't have what it takes and they give up. When I step into the classroom, that's in the back of my mind, am I going to be the one who discourages a student? That keeps me on my toes."

Being honored for his teaching practice after 27 years as an educator was an amazing experience, he says and  Escueta was especially touched by meeting and talking to Trudeau, himself a former teacher.

"When I got to shake his hand, we talked quite a while on stage," Escueta recalled, and later the PM autographed a Verbathon t-shirt that the veteran teacher will keep as a memento of the experience.

A visit with Coquitlam-Port Coquitlam MP Ron McKinnon was also a bit "freaky," Escueta said, because it turns out he taught the politician's daughter, Sarah, many years ago.

Escueta also wants to acknowledge Kleim, who nominated him, for all her hard work in putting together the nomination package.

"For the nomination to come from a parent, that carries a lot of weight, she rallied the parents together… I wouldn't be here in Ottawa if it wasn't for her initiative."