New Westminster council wants the city of Port Moody to reconsider having Mayor Rob Vagramov as its director on the Metro Vancouver board. In a resolution passed during a closed meeting Sept.
Nov 25, 2019 10:41 AM By: Gary Mckenna 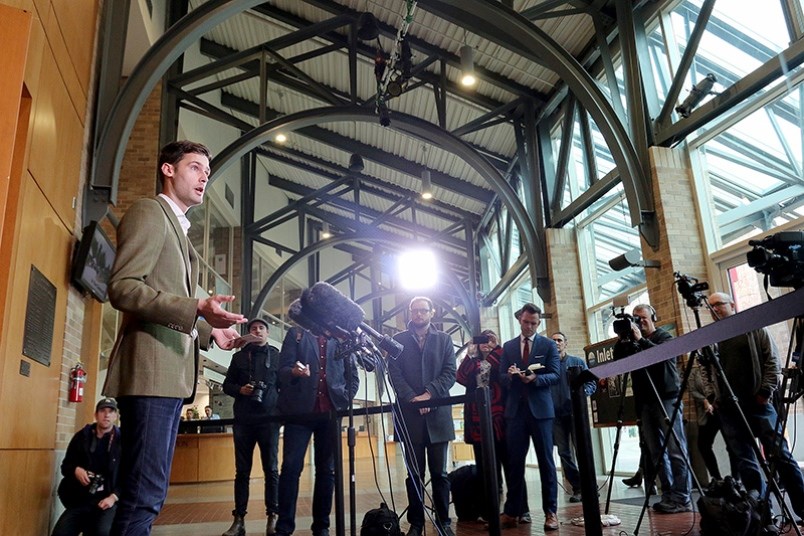 Port Moody Mayor Rob Vagramov takes questions from the media last week after making a statement to announce his intention to return to office now that his charge of sexual assault has been stayed.

New Westminster council wants the city of Port Moody to reconsider having Mayor Rob Vagramov as its director on the Metro Vancouver board.

In a resolution passed during a closed meeting Sept. 30, councillors in the Royal City stated they felt compelled to "speak out" given Vagramov's legal issues.

"It is very difficult to remain silent while serving on municipality boards and committees with another public official who has been named in a serious incident involving sexual assault," stated the resolution. "Therefore, be it resolved that a letter from mayor and council be sent to the city of Port Moody council requesting that they consider nominating an alternate to Rob Vagramov to serve as a director on the Metro board."

New Westminster councillors had no difficulty remaining silent when asked about the resolution by The Tri-City News last week.

All of the elected officials contacted said they would not comment on an issue discussed in a closed meeting and Mayor Jonathan Cote did not respond to a request for an interview.

City clerk Jacque Killawee would not say why the resolution was discussed and voted on behind closed doors even though in-camera meetings usually only involve just three areas of discussion: legal matters; items related to the sale of land; and issues involving labour, including city employees.

Earlier this month, a stay of proceedings was entered for the sexual assault charge laid against Vagramov in March after he "completed the obligations under the alternative measures program," special prosecutor Michael Klein told Judge Eugene Jamison.

In a press conference the day after his court case wrapped up, Vagramov called the incident that led to the charges an "awkward date" and claimed he had been "exonerated" even though alternative measures require an accused to take responsibility for the actions that led to the criminal charge.

He returned to work full-time last week, saying time will tell whether the residents of Port Moody welcome him back to his role.

It is customary — but not automatic — for the mayor of each Metro Vancouver municipality to sit at the regional board but directors are chosen and approved by individual city councils.

New Westminster council passed its resolution during a period when Vagramov briefly returned to work in September. The resolution also states that a second letter be sent to Metro Vancouver asking that Vagramov be removed from committee appointments "until such time as his legal challenges have been resolved."

Vagramov eventually went back on leave following a contentious and emotional council meeting where dozens of speakers, including women who said they have been sexually assaulted, called on the mayor to step aside until his criminal case was concluded. (In a vote, a majority of PoMo council also asked him to resume his leave.)

One of the speakers at the Oct. 8 PoMo council meeting, New Westminster Coun. Mary Trentadue, said she "shouldn't have to sit next to someone" who has been charged with sexual assault."

Last week, Trentadue told The Tri-City News that while she would not comment on the resolution approved by her council, she still has concerns about serving next to Vagramov at the regional level.

In 2019, Trentadue sat on the liquid waste committee with Vagramov. She said she would have to see what happened with the 2020 appointments before making any decisions about what committees she will participate in.

"I guess I would have to make that kind of decision at that time whether I am willing to sit on a committee that he is on," she said.