Demolition of some hospital buildings underway
Jan 12, 2021 9:03 AM By: Theresa McManus 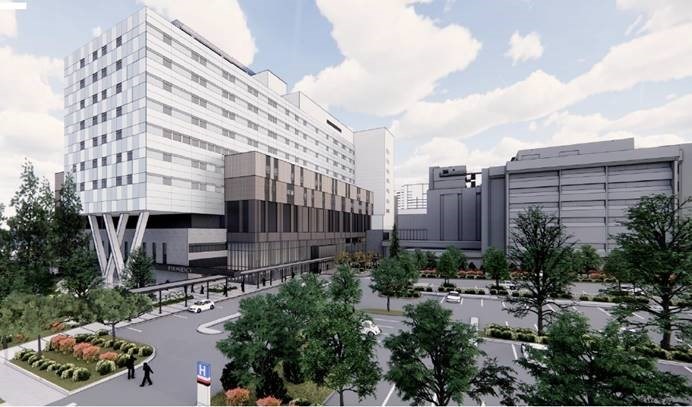 Rendering of the three-phased expansion of Royal Columbian Hospital in New Westminster.Contributed/Fraser Health

“This next important step in the redevelopment project ensures that the region’s fast-growing population is closer to accessing an expanded and upgraded Royal Columbian Hospital,” Health Minister Adrian Dix said in a news release. “The hospital is the oldest and one of the busiest in B.C., and our government is committed to making sure people can access the health-care services they need in a state-of-the-art facility.”

Design, geotechnical work, pre-construction work for new construction, as well as abatement work in preparation for the demolition of several older hospital buildings at the site, is now underway at Royal Columbian Hospital.

According to Fraser Health, excavation is beginning for an interim support building that will house the hospital’s support services during construction, with excavation for a new acute care tower to begin in early 2021. Phase 2 construction is expected to be complete in early 2025.

“Royal Columbian Hospital is an important part of the fabric of our community and it means so much to so many people,” New Westminster MLA Jennifer Whiteside said in a news release. “I’m proud that our government is making this important investment to redevelop the hospital and increase capacity for patients and health-care workers.”

The redevelopment of Royal Columbian Hospital is a multi-year project that will be done in three phases. Fraser Health says the project will transform almost every part of the hospital.

“We are pleased to mark this important milestone with the signing of the design-build and construction-management agreements, enabling us to take next steps forward in phases two and three of the Royal Columbian redevelopment project,” said Dr. Victoria Lee, Fraser Health president and CEO. “Royal Columbian Hospital plays an integral role in our regional hospital network, ensuring people in our region have access to care for a wide range of health concerns. This project will ensure lifesaving services are available to people from across our region now and for many years to come.”

According to Fraser Health’s website, Royal Columbian’s redevelopment is one of the largest government-funded capital health-care projects in B.C.’s history with an estimated $1.35-billion contribution from the province and a multi-million-dollar commitment from the Royal Columbian Hospital Foundation. The third phase of construction is projected to start in 2023 and to be complete in 2026.

*Phase 1 resulted in the July 2020 opening of a new 75-bed mental health and substance use wellness centre. It also prepared the hospital’s infrastructure for the expansion in bed capacity that’s coming in Phase 2.

*Phase 2 will create a new acute care tower with more beds for intensive care, cardiac intensive care, medicine and surgical patients, with most in single-patient private rooms. It will also have a new, larger emergency department with a medical imaging unit. The tower will have four more operating rooms, including one for cardiac patients, three more cardiology suites, two more radiology suites and one more CT scanner, in addition to services in the existing health care centre.

*Phase 3 will upgrade and expand areas in the existing health care centre and Columbia Tower to support the beds and services being added in Phase 2.

According to Fraser Health, the hospital will have added 50% more beds, increasing from 446 to 675, by the end of the project.

New Westminster hospital is Canada's busiest for this heart procedure
Aug 27, 2020 8:05 AM

2044
Search for missing Port Moody woman takes on ‘life of its own’
1582
'It's chaos': Massive search underway for missing Port Moody woman
1544
Everything you need to know about COVID-19 vaccines in B.C.
1211
'Administrative error' leaves some UBC students owing nearly $10,000 in tuition, due within days
953
'Clinically extremely vulnerable': Are you first in line to get vaccinated in B.C.?