Collision and tragic injuries to two children are therefore not the result of any police action or inaction, states Independent Investigations Office after collecting evidence in Dec. 27 crash that seriously injured two Burnaby girls; GoFundMe has raised more than $174,000 for the family
Feb 25, 2021 9:48 AM By: Diane Strandberg 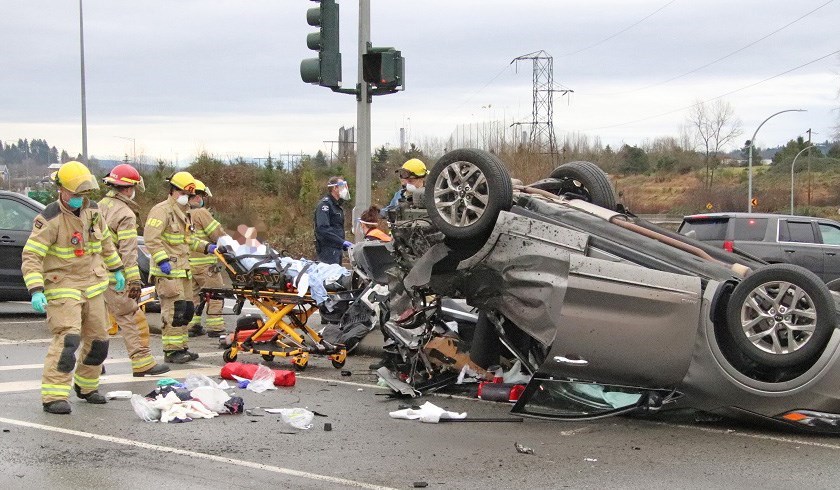 A Burnaby family of five was injured as a driver crashed into a Kia Sorento on the Brunette Overpass in Coquitlam on Dec. 27, 2020.Shane MacKichan

Evidence collected in the wake of a horrific crash on the Brunette Avenue overpass that injured a Burnaby family of five shows there are no grounds for charges against the officer who was conducting a traffic stop before the accident, says an independent civilian oversight agency.

On Tuesday, the chief civilian director (CCD) of the Independent Investigations Office (IIO) of BC made public a decision regarding the motor vehicle accident that took place on Dec. 27, 2020, in Coquitlam.

Video and audio evidence — corroborated by statements from civilian witnesses — indicates that the officer was already discontinuing their attempted stop and was a short distance away when the collision occurred.

“The IIO’s CCD has reviewed the evidence — including video and audio recordings, police vehicle data, and statements from civilian, emergency personnel and police witnesses — and determined that there was no wrongdoing on the part of the officer,” the agency states in its release.

In describing the incident, the IIO states that an officer was conducting a radar speed detection effort on Highway 1 eastbound when a grey Dodge Charger was reportedly speeding by.

The officer attempted to conduct a traffic stop but the driver did not stop and instead took the off ramp at Brunette Avenue where the Charger collided with a Kia Sorento that was stopped at the intersection.

Two adults and three kids were in the vehicle, of which two children sustained serious injuries.

However, because there was no wrongdoing on the part of the officer, “the subsequent collision and tragic injuries to two children are therefore not the result of any police action or inaction,” the press release.

Consequently, there are no plans to refer the investigation to Crown Counsel for consideration.

In the aftermath of the crash, a GoFundMe fundraiser was started by a friend of the Savic family of Burnaby.

According to the fundraiser, money raised will go to help the family with expenses as they are unable to work.

In an earlier post, the family stated that the two girls, Nikolina and Lana, sustained serious head injuries resulting in brain damage. “In times of tragedy we come together as a community to lift up the ones we love, the ones who are hurting and who need our support now, more than ever,” states the fundraiser started by Mlada Srbadija.