Opinion: The BC NDP seek to torpedo Kevin Falcon’s BC Liberal leadership run

Kevin Falcon’s presumptive run to be the next BC Liberal leader will meet a vociferous BC NDP that is already dredging up his past
Feb 16, 2021 8:29 AM By: Mo Amir 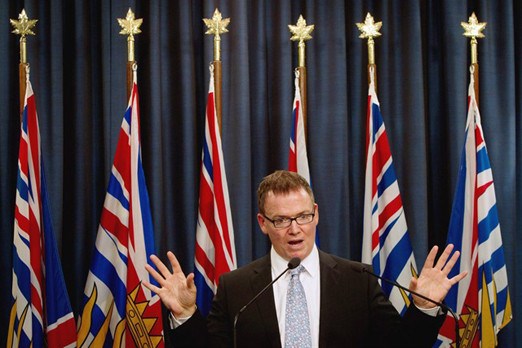 Kevin Falcon responds to the results of the HST referendum at the B.C. Legislature in Victoria, B.C., on Friday August 26, 2011. Photo Darryl Dyck, Canadian Press

In the wake of disastrous 2020 election results, the BC Liberal Party is seeking renewal.

It’s odd, then, that former BC Liberal Deputy Premier Kevin Falcon is the presumptive front-runner to take the reins of a party battered by internal division and bad branding. Nostalgia from the Aughts — particularly as notable as Falcon — may spotlight BC Liberal baggage, just as Adrian Dix carried the albatross of the 1990s when he was the BC NDP leader.

Ask any BC Liberal in the know: Falcon is guaranteed to run for BC Liberal leadership.

Circulating gossip says that Falcon is already spending an exorbitant amount of money to keep strategists and communications professionals on retainer. Some rumours suggest that he’s doling out as much as $50,000 per month. That’s a lot of money considering the BC Liberals have not set a leadership contest since Andrew Wilkinson has yet to step down as party leader.

Evidently, the BC NDP have noticed.

Kevin Falcon may have unofficially declared his nomination when he dropped a compassionate Vancouver Sun op-ed about mental health and homelessness. Four days later, former BC NDP Mental Health and Addictions Minister Judy Darcy responded with her own Vancouver Sun op-ed that partially blamed Falcon for creating the very homelessness and addictions crises for which he purported to have solutions.

On his own weekly podcast, The Dash, B.C. Attorney General David Eby dedicates a recurring segment called “The Falcon Report” to Falcon. This involves Eby painting Falcon akin to the perception that many voters had of Wilkinson: a rich, out-of-touch elitist.

Eby dredges up Falcon’s past as the B.C. Minister of State for Deregulation and Minister of Finance when Falcon “decimated social services” in the province. Eby even calls out Falcon for his involvement in the infamous BC Liberal Zoom roast that sexualized BC NDP MLA Bowinn Ma; Falcon being the only participant yet to apologize.

Moreover, Eby notes that Falcon described his time in public office as “an opportunity cost preventing him from making as much money as he wanted to make.” Falcon allegedly made these comments in a speech to alumni of the Shaughnessy private school he attended.

In Episode #113 of This is VANCOLOUR, B.C. Minister of Economy Recovery Ravi Kahlon describes Falcon as the “poster boy” for BC Liberal budget cuts which laid the bedrock for many of the province’s crises, including homelessness.

Kahlon recalls an incident in 2008 when a woman threatened suicide on the Second Narrows Bridge, prompting the Vancouver Police Department to shut down the bridge. “Kevin Falcon went out and lambasted the police for doing that. And this person now has the audacity to write an op-ed that he cares about mental health and addictions?”

At the time, Falcon also dismissed suicide barriers on bridges saying, “If people are trying to kill themselves, it is tough to stop them.”

Think of the optics: Falcon, as a former Minister of Finance, contributed to B.C.’s economic environment that allowed for rampant real estate speculation, only to leave public office and profit from the environment he created, now as a real estate development executive himself.

This line of attack writes itself, especially in this province.

While Kevin Falcon amasses his war chest and charts his BC Liberal leadership run, the BC NDP may be staging the kind of disruptive messaging that tailspins their opposition’s leadership race — whenever that might be — into divisive disarray.

Mo Amir is the host of This is VANCOLOUR, a politics and culture podcast available on Apple Podcasts, Spotify, Google Podcasts, and www.thisisvancolour.com