Dave Jonsson was a self-centered 19-year-old skateboarder when he had what he calls an epiphany. Now, almost 11 years later, he hopes his moment of self-awareness will extend to the entire Tri-Cities.
May 22, 2018 4:08 PM By: Mario Bartel 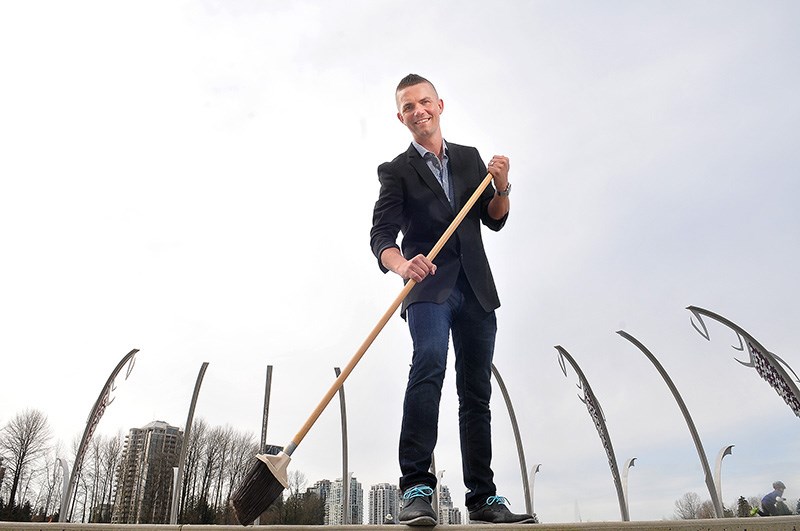 Dave Jonsson is the organizer of Love My City, a week-long initiative in July to connect people to their community and each other by doing good deeds or helping out with projects that benefit the community like park clean-ups. The week will end with a community celebration at the amphitheatre in Coquitlam's Town Centre park on July 21.MARIO BARTEL/THE TRI-CITY NEWS

Dave Jonsson was a self-centered 19-year-old skateboarder when he had what he calls an epiphany.

Now, almost 11 years later, he hopes his moment of self-awareness will extend to the entire Tri-Cities.

Jonsson’s realization — to be able to love better and extend that love to the people and community around him — came after the light plane in which he was a passenger crashed through the trees into a valley near Squamish.

The pilot, his best buddy from Iceland who’d just earned his pilot’s licence earlier that summer, was killed. Two other friends in the aircraft survived.

Jonsson said the crash changed his life, noting: “I wanted to be a better person."

He went from being an aimless young man lurching from one dead-end job to another and living for good times to attending theology school.

More importantly, Jonsson said, he learned about the importance of love and forging real, heartfelt connections.

July 16 to 21, Jonsson wants everyone in the Tri-Cities to make that kind of connection with their community by showing their love for the city they live in.

Now 30, married with four children and a pastor at Coquitlam Alliance Church, Jonsson is the driving force behind Love My City, a week-long celebration of connection and community. HIs vision is to solicit a shopping list of small community projects in each of the cities — say, park or creek clean-ups, street beautification or fence painting — then dispatch teams of volunteers from different backgrounds to execute them. The effort will culminate with a celebration July 21 at Coquitlam's Town Centre Park featuring live comedy and music at the outdoor amphitheatre.

“We need to create ways in which people care for each other,” Jonsson said.

That sense of caring can not only break through physical barriers, but also cultural and spiritual divides.

“It’s inclusive of all people,” Jonsson said. “We all have a part to play to bring unity.”

Jonsson has been busy making pitches to various community organizations as well as officials from the three municipalities that comprise the Tri-Cities to build awareness and get them on board with suggested projects or to help recruit volunteers.

“The cities win and people win,” Jonsson said. “What city wouldn’t want this?”

• To submit a community project, or to sign up as a volunteer, go to www.lovemycityweek.com.