Pick fruit if you don't want bears in your yard 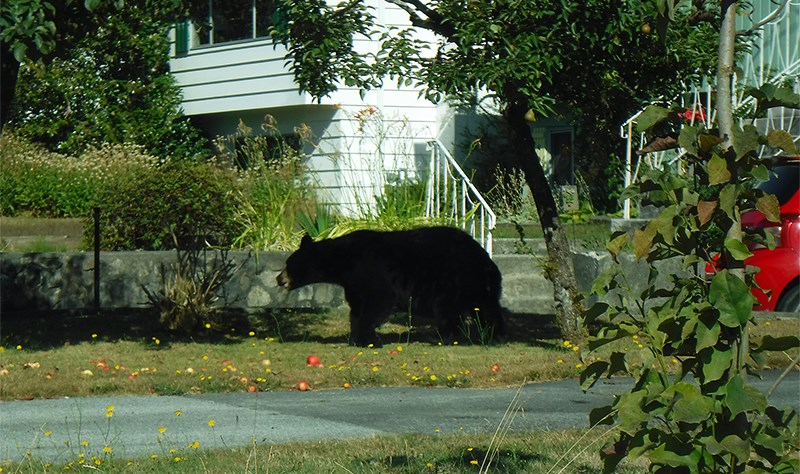 It’s harvest season and that means an abundance of fruit for humans — and bears.

But to make sure a hungry bruin doesn’t get to your backyard bounty before you do, make sure you pick your ripe fruit and keep it indoors.

Those black bears you see in your neighbourhood and local greenbelt are fattening up for winter and they have only a few months left before hibernation, so it’s important to remove all attractants.
That means getting rid of blackberries, apples, pears and any other delicious fruit that are hanging off your trees and bushes or that have fallen on the ground.

Already in Coquitlam, there have been three conflict complaints about bears getting into fruit.

“I believe residential fruit attractants are under-reported as some residents view this as 'close enough' to a bear’s natural food,” said Julie Kanya, Coquitlam’s Urban Wildlife Coordinator, in an email to the Tri-City News.

"The problem is that allowing wildlife to eat in your backyard is habituating them to forage in residential areas and conditioning them to be comfortable getting close to humans. It’s also increasing their opportunity to get into other attractants.

She recommends picking all fruit so it doesn’t attract bears or rodents.

Although fruit is a problem, leaving garbage out for bears is an even bigger concern.

Other problem attractants, according to WildSafe BC, are pet food, vegetable gardens, beehives, pets, barbecues, outside freezers, bird feeders, compost and livestock.

Coquitlam residents are encouraged to report wildlife attractant issues to the city as soon as possible at 604-927-3500 or urbanwildlife@coquitlam.ca.

"The sooner a wildlife attractant issue is reported, the quicker a wildlife bylaw officer can respond and reduce the opportunity for a bear or other animal to become human habituated/food conditioned,” Kanya said.