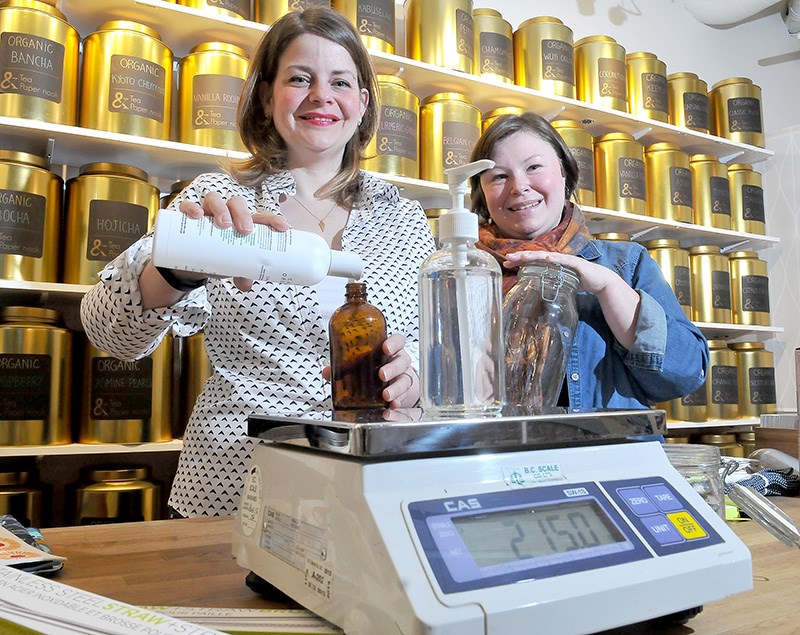 Julie Veres and Teresa Johansson want to make the world a better place, 100ml at a time.

The Port Moody entrepreneurs are preparing to launch the city’s first refilling station where customers will be able to purchase personal and household cleaning products by weight, transporting them home in their own reusable containers or ones they can purchase from the store.

The Refillery will be an adjunct to the tea and paper shop Veres already owns in Newport Village. Johansson owns the nearby Village Toy Shoppe. But the women say their new venture is more than just another business idea.

They’re dismayed by the amount of single-use plastic packaging that ends up in landfills and also finds its way into the oceans. The report by the United Nations says those plastics can take up to 1,000 years to decompose, leaching toxic chemicals like phthalates and Bisphenol A [also known as BPA] into the soil and water along the way.

Johansson said reusing containers for easily measured and transportable products like liquid detergent, household cleaners, shampoo and bubble bath is a small step to reducing the harm such containers can cause — “living lighter,” she calls it.

“If you can take a bottle of shampoo and refill it 20 times, that’s 20 bottles you’re saving from going into a landfill,” Johannson said.

The idea is gaining traction.

Veres and Johannson said they spent a lot of time developing their plan by visiting a similar shop, The Soap Dispensary, in Vancouver. And other stores are popping up offering everything from dried fruit to nuts to baking supplies in reusable bulk containers.

But transporting the concept to the suburbs, where shoppers are more inclined to equate shopping in bulk with schlepping home giant vats of mustard from Costco, takes a bit of a leap of faith, Johansson said.

“It’s a tipping point,” she said. “Shoppers want change, to go to a simpler time when you picked up things in your own container and they’re ready to put their money where their mouth is.”

Veres, who already sells loose tea in bulk in her shop, said many of her customers are getting more comfortable with the idea of bringing their own containers when they shop.

Some are even getting tuned in by their kids, who are learning about the negative impacts of single-use commodities like straws, disposable coffee cups and lids, in school.

The key to “living lighter,” Veres said, is to integrate it as a lifestyle, not a chore.

“It’s hard to make changes on your own,” she said. “You have to make it approachable and attainable for regular people.”

• The Refillery is expected to open in February with about a dozen personal and home cleaning products available — all of them locally-sourced and free of harmful chemicals. To find out more, go to www.portmoodyrefillery.com.