In a letter sent from the school to parents, the school's principal wrote a “significant number” of students and staff were told to self-isolate and “severe staffing constraints” would make it difficult to manage in-class instruction
Mar 4, 2021 11:47 AM By: Stefan Labbé 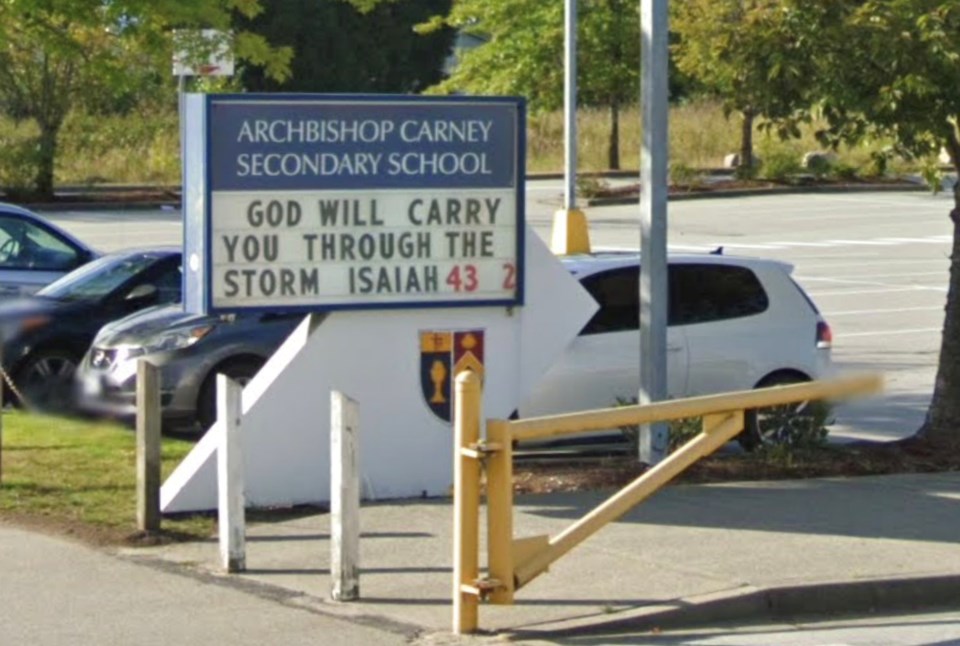 Archbishop Carney Regional Secondary School in Port Coquitlam has shuttered its doors after a variant of concern was isolated at the school and several students and staff were told to self-isolate.Google Maps

A Port Coquitlam high school has suspended in-person classes for three weeks after a COVID-19 variant of concern was identified at the school and “a significant number of students and staff have been directed to isolate.”

Archbishop Carney Regional Secondary School, an independent Catholic school in Port Coquitlam, is one of now 23 schools across the province that have been hit with a variant of concern, though few have resorted to a full suspension of in-person classes.

Fraser Health sent families early notification letters March 1 indicating a variant of concern had been identified in at least one person on school grounds, later flagging exposures spanning Feb. 22 to 26, as well as March 1.

In the letter to families, the health authority states that the person infected with the COVID-19 variant has been isolated and “there is no chance of direct exposure at this time.”

However, as of Thursday, March 4, a banner notification on the school’s landing page stated in-person learning is suspended up to and including March 12. The notice added that teachers will contact families either March 4 or 5 to set up online learning for each class, with in-person lessons resuming following Spring Break.

And in a letter sent from the school to parents March 3, Archbishop Carney’s principal wrote that after a “significant number” of students and staff were told to self-isolate, “severe staffing constraints” would make it difficult to manage in-class instruction.

“The continuity of learning will continue through this closure and time of isolation and we ask that you be patient with us as we make this transition,” wrote principal Len De Julius.

School officials were not in the office Thursday and, in response to inquiries from the Tri-City News, De Julius declined to provide any additional information. In a press release distributed late Thursday, Fraser Health said it was supporting the school with contact tracing and communicating with families and staff to ensure everyone is properly isolated. The health authority did not comment on the number of people who have tested positive for the coronavirus as the school.

In additional to Archbishop Carney, Maple Creek middle school in Coquitlam is the only other Tri-Cities school exposure that has been publicly linked to a variant of concern.

Variants of concern encompass a variety of mutations in the SARS-CoV-2 virus. Chief among those in B.C. are the B.1.1.7, or the U.K., a highly contagious form of the coronavirus, and the South African variant, against which some vaccines have shown little effectiveness.

On Thursday, provincial health officer Dr. Bonnie Henry said 46 new variant cases had been identified across the province, raising the total to 246, of which a majority (178) have been found in Fraser Health. Two people have died of a variant in recent days and contact tracers are still having trouble tracking the source of transmission in roughly 25% of cases, said Henry.

Of the 246 variant cases, 218 cases have been identified as the U.K. variant and 26 as the South African mutation. There are currently 16 active cases reported as variants of concern in B.C., according to Henry.

The rise in new variants comes at a time when the Tri-Cities is grappling with a local surge of COVID-19 cases.

According to data released by the BC Centre for Disease Control Thursday, 225 new COVID-19 cases were reported in the Tri-Cities last week.

Across the Tri-Cities, Fraser Health has flagged 21 schools for active school exposures, a number that has surged and abated in recent weeks as local caseloads fluctuate.

Henry once again warned exposure to COVID-19 in schools is directly connected with the level of transmission in the community.