Riverside students' winning proposal will be conducted by astronauts on the International Space Station
Dec 21, 2016 10:55 AM By: Diane Strandberg 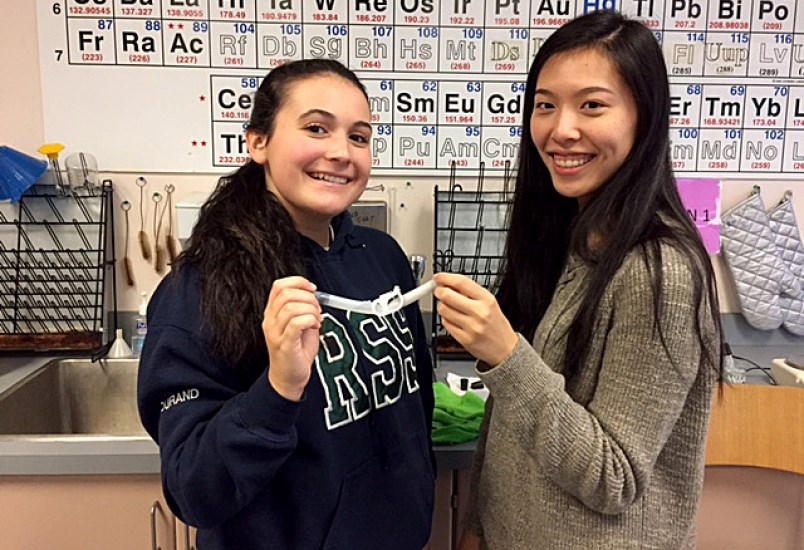 Riverside secondary school students Alexa Durand and Brenda Shen were flying high last week after learning their experiment for studying the curing rate of concrete in a weightless environment was chosen by the Student Spaceflight Experiment Program. It will be tested next spring by astronauts on the International Space Station.

Two Port Coquitlam high school students have stars in their eyes after learning an experiment they designed will be conducted by astronauts on the International Space Station next spring.

Alexa Durand and Brenda Shen, Grade 12 students at Port Coquitlam's Riverside secondary school, said they feel honoured and excited after their experiment was picked from 277 School District 43 proposals to participate in the Space Flight Experiments program.

"It was really exciting, we found out while we were in class," said Shen.

The two teens are friends outside of school and both are interested in pursuing studies in sciences in post-secondary school, so it's no surprise that they collaborated on developing their space flight experiment.

Their plan is to look at the curing rate of concrete in a weightless environment. It was inspired by a visit to Heritage Woods secondary during a workshop on the space flight experiment program.

Noticing the concrete walls of the Port Moody school, the teens wondered how durable and strong concrete would be if it was mixed in a weightless environment.

Now that their proposal has been accepted by the SSEP review board, the students have to set up their experiment to meet exact specifications. It will be put in a tube with cement, sand and fly ash in one compartment and water in another.
"The astronauts will release the clamp in the middle [to mix the materials] and when it comes down, we are going to do a strength and density test to find out the difference in the curing in space and on the ground," Shen explained. "We're hoping our experiment provides valuable results that can be used in the future when people have to build structures."

SD43 is one of only two Canadian participants chosen for this mission, which will be part of the Mission 11 payload to the International Space Station.

The experiment is expected to launch on a SpaceX Falcon-9 rocket from Cape Canaveral Air Force Station in Florida in spring 2017.