Port Moody's Reid Demelo has turned a moment of internet fame into a role in a TV commercial that is part of college basketball's biggest showcase, March Madness.
Mar 22, 2021 3:31 PM By: Mario Bartel 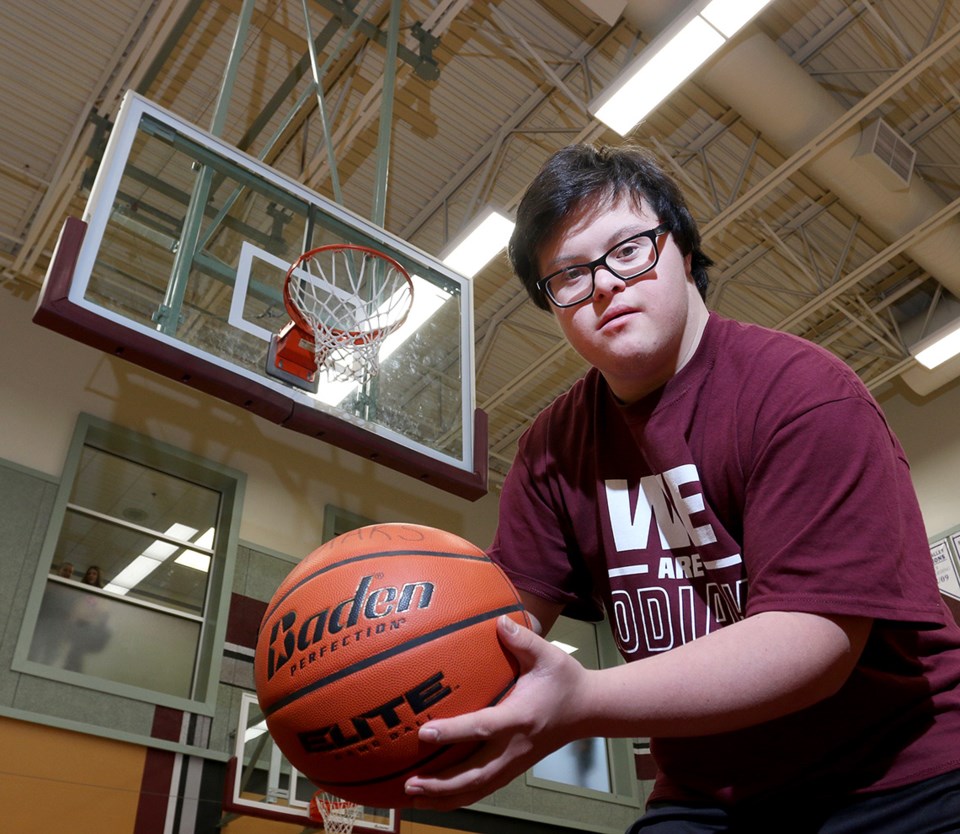 A basketball shot that was heard around the internet is still making noise. And the Port Moody student who took it is now part of the sport’s biggest showcase.

Heritage Woods secondary grad Reid Demelo is featured in a 15-second commercial that is part of Ritz crackers’ sponsorship of the NCAA’s March Madness college basketball tournament which started last Thursday and culminates with the championship final on April 5.

The spot, entitled The Manager, highlights the unsung contributions of team managers who quietly go about their duties ensuring players have water, fresh towels and a myriad other little details addressed so they can just concentrate on the game.

Demelo, who has Down Syndrome, was the manager of the Heritage Woods’ senior boys basketball team in Nov., 2019, when he was summoned from the bench to play a few moments in the squad’s opening game against the Kitsilano Blues at its own Kodiak Klassic tournament.

Wearing a jersey he borrowed from teammate Morgan Liski, Demelo took a pass from Viktor Glogovac and arced a perfect shot through the basket just as the game-ending buzzer sounded. The crowd of more than 1,000 students and teachers that traditionally packs the gym for lunch-hour game went wild. As did the shaky cellphone video that was quickly shared on social media and then picked up by local TV stations as well as networks like CBC and CBS Sports.

Reid Demelo a high school student with Down syndrome, checked into the game and hit a buzzer beater. Just awesome stuff. pic.twitter.com/qfZ5QhQ610

The viral reaction sparked an effort by Demelo’s fellow students at Heritage Woods to get him an invitation to appear on the Ellen DeGeneres talk show.

But for basketball fans, becoming part of the month-long March Madness spectacle that dominates TV ratings might be an even bigger triumph.

“I can imagine Reid saying it is ‘Big Time,’” said the principal of Heritage Woods, Todd Clerkson.

The spot, created by Virginia-based ad company, The Martin Agency, also features another Kodiaks’ player, Nic Graham. In it, Demelo is filing clipboards and paperwork in a gym office, then walks out onto the court where he’s warmly greeted by a trio of players, one of whom tosses him a packet of crackers. The players pat Demelo on the shoulder and they all walk off the court together. The commercial’s narrator says it is a tribute to “those who impact the game without even playing.”

Clerkson said the ad perfectly captures Demelo’s “magnetic personality, and reminds me of a typical day where Reid would enter the gym and see his buddies.” He added, “people love Reid and love being around him, not because he is different but because he is a great guy.”

While Demelo is no longer at Heritage Woods, he’s still an active athlete, playing basketball, swimming competitively, as well as participating in speed skating, track and field and Ultimate.