Port Moody fire chief Ron Coulson has announced his intention to retire in June. He's been the city's top firefighter for more than four years, after a long career with Vancouver Fire and Rescue Services.
Feb 18, 2021 8:21 PM By: Mario Bartel 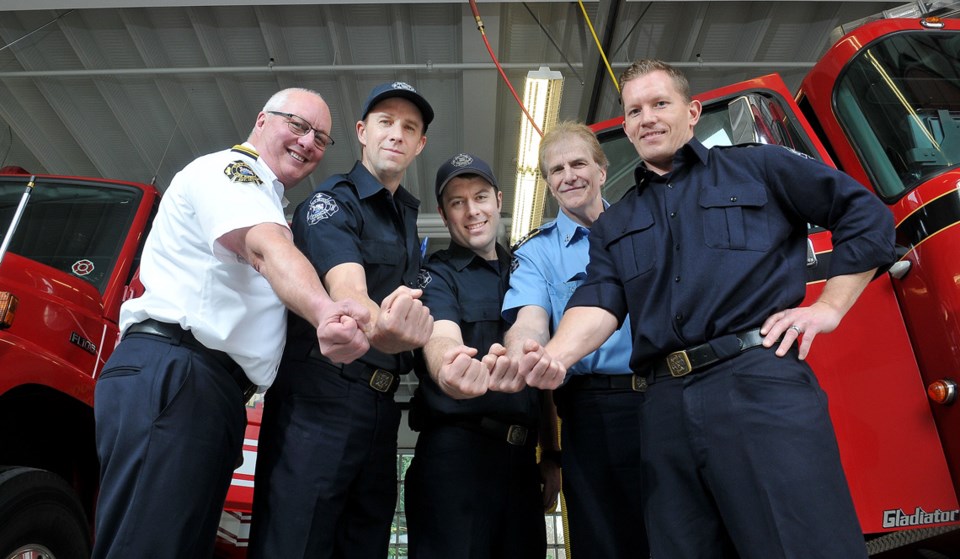 Port Moody fire chief Ron Coulson, left, says the department's community initiatives, like its annual blood donor clinic are part of a two-way relationship of appreciation between firefighters and the community they serve. He's announced he'll be retiring in June.TRI-CITY NEWS FILE PHOTO

Port Moody Fire Chief Ron Coulson is pedalling into retirement but he says he’s not ready for an electric-assist bicycle just yet.

“I’ve still got lots of energy,” Coulson told the Tri-City News Thursday, after announcing his intention to hang up his shoulder chevrons in June.

Coulson, a Tri-City resident, said his immediate retirement plans include riding a new gravel bike he hopes to acquire in the Comox Valley where he has family, and travelling with his wife when that’s allowed again.

Coulson said policy and procedure have become his passion since taking the helm of Port Moody’s fire department more than four years ago after a long ascent up the career ladder at Vancouver Fire and Rescue Services where he was a firefighter, lieutenant, captain and then assistant chief.

He said coming to Port Moody’s small fire department as an outsider from the big city immediately taught him the importance of being a good communicator. “I needed to develop that trust so everybody understands why decisions are being made.”

Coulson’s many years in Vancouver also made him keenly aware of the gaps in resources available between a big city fire department and those of a smaller community. And, as Port Moody grows, those gaps would only get wider.

Coulson has devoted a lot of time and effort to forging relationships with neighbouring departments in Coquitlam, Port Coquitlam, New Westminster and Burnaby that allow them to lean on each other for expertise, manpower and equipment when needed.

Port Moody Mayor Rob Vagramov said Coulson’s skills at building bridges and punching high above the city’s weight have been especially valuable lately. “[His] contributions to Port Moody’s COVID-19 response this past year could not be overstated,” he said in a press release.

But even as Port Moody Fire Rescue copes with the increasing demands of a growing city, Coulson said he’s proud of the department’s small-town sensibilities that still value community above all else. Firefighters are involved in all sorts of initiatives that help raise funds for various causes and promote safety, like an annual blood donor clinic and a pancake breakfast, as well as sponsoring a young person to attend Camp Ignite every summer.

“There’s a sense of appreciation in both directions,” he said. “That’s something small cities can really nurture.”

Coulson said the actual date of his departure is still to be determined, depending on the search for his replacement, whom he’ll help to transition into his office.