Port Moody is going to hold off on allowing food carts in the city for at least another year after several councillors expressed concern about the impact they'd have on the city's existing businesses.
Apr 28, 2021 12:27 PM By: Mario Bartel 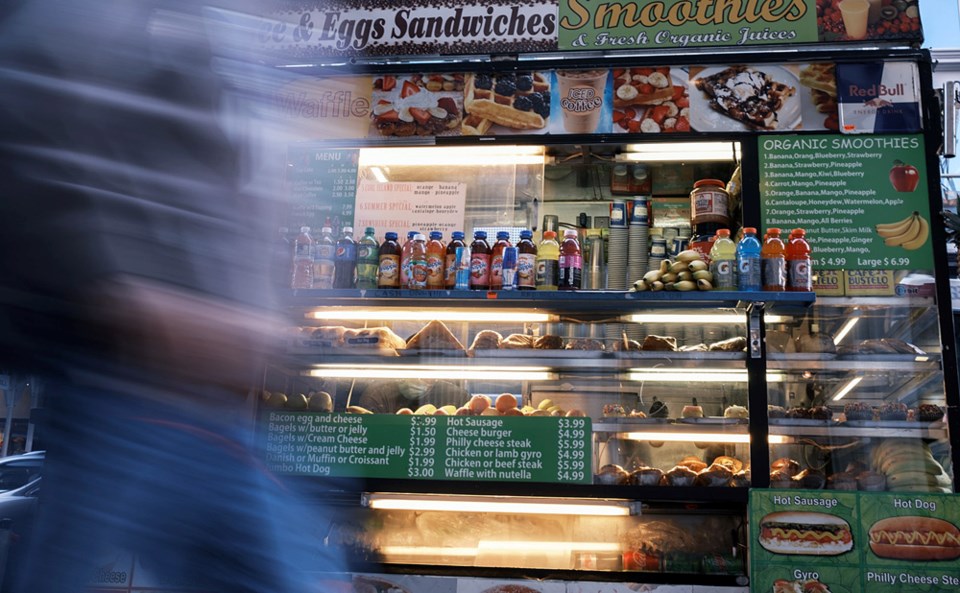 Food carts, like this one in New York City, won't be coming to Port Moody anytime soon.STEPHEN MCFADDEN/UNSPLASH

Don’t expect to get a hot dog or cup of roasted chestnuts from a food cart vendor in Port Moody anytime soon.

Tuesday, council decided to postpone consideration of a proposal by Coun. Steve Milani —until the middle of next year — to have staff develop a policy that would permit and regulate such small, mobile enterprises in the city.

Milani said food carts would “enliven the dull urban spaces” in Port Moody and could even help draw away some of the pressure on Rocky Point Park, by attracting people to other parts of the city like the Queens Street plaza.

“Food carts are fun, and fun is good for your mental health,” he said, adding it’s unlikely the carts would pose much competition to existing businesses as the items they sell aren’t generally offered by restaurants or cafés.

But several councillors expressed concern that even a tiny bit of increased competition could have an impact on established brick and mortar businesses that are already burdened by revenue losses and increased costs because of the COVID-19 pandemic.

“It is a cruel slap in the face to our businesses,” Coun. Diana Dilworth said. “These are businesses who have invested millions of dollars into their brick and mortar operations.”

But, she added, the idea is one she could get behind once the pandemic is in the past and the established business community has had a chance to regain its footing. “Right now, my priority is supporting our local businesses,” Lahti said.

However, Coun. Hunter Madsen said the threat to existing businesses from food carts may be overblown. “We’re not going to have 50 food carts lined up,” he said. “There may be only a few added to the scene.”

While Madsen said food carts should be part of the conversation to improve Port Moody’s street life, he agreed it might be best to hold off until the city’s business community has had a chance to recover from the pandemic’s economic impacts.