Port Moody police are hoping a little black and yellow sticker will help cut down on bike theft in the city — and may even have a domino effect on other petty property crime.
May 30, 2019 8:41 AM By: Mario Bartel 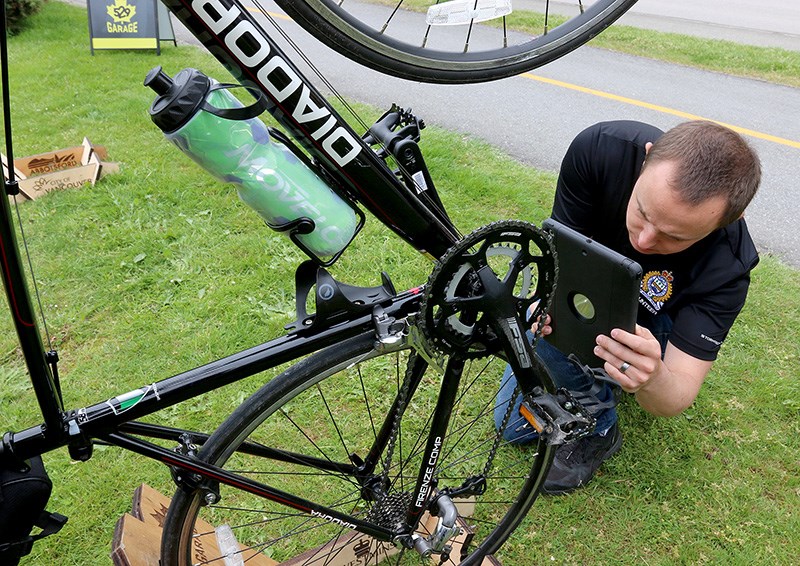 Jared Collier, a volunteer with the Port Moody police department, records the serial number and other information about a bike being registered into the 529 Garage program the department launched on Wednesday as part of Bike to Work Week.MARIO BARTEL/THE TRI-CITY NEWS

Port Moody police are hoping a little black and yellow sticker will help cut down on bike theft in the city — and may even have a domino effect on other petty property crime.

Wednesday, the department introduced its participation in 529 Garage, a bike registration service that makes it easy for users — and police — to trace stolen bikes using their mobile devices. Officers were at the corner of Ioco Road and Murray Street from 7:30 to 10:30 a.m. to input information on bikes into the program’s database as well as affix the little stickers that Sgt. Travis Carroll, the program’s coordinator for Port Moody police, hopes will be a deterrent to potential thieves. He said about 30 cyclists has stopped by in the first two hours, some of them returning after having driven by then doubling back to bring all their bikes from home loaded onto their car rack.

Carroll said bicycle theft is usually a crime of opportunity in which thieves take advantage of a bike that has been left unsecured outside or in a storage locker or underground parkade. Sometimes, those bikes become getaway vehicles for further property crimes because, he said, they’re quiet, easy to manoeuvre in and out of tight spaces, and then readily discarded.

Carroll said while only about 20 bike thefts are reported in Port Moody each year, that number could be reduced by registration, as well as education about how to secure a bike properly and what types of locks work best.

The 529 Garage app, for which the department has to pay a licensing fee, allows registered users to alert more than 400 police agencies, bike shops and clubs, as well as other cyclists, if their bike has been stolen. It can also be used to check if a bike you’re thinking of buying has been reported stolen.

Const. Jason Maschke, the community relations officer for Port Moody police, said the app casts “a much wider net, providing a greater opportunity for a successful recovery.” But, he added, stolen bikes should still be reported to police.

There will be several other upcoming opportunities for Port Moody cyclists to register their rides, including two more dedicated events as well as at the city’s community fair, Golden Spike Days, RibFest and Car-Free day.