Daniela Hammond has waded into an oil crisis. But this one doesn’t involve pipelines or the price of gas.
May 11, 2019 7:00 AM By: Mario Bartel 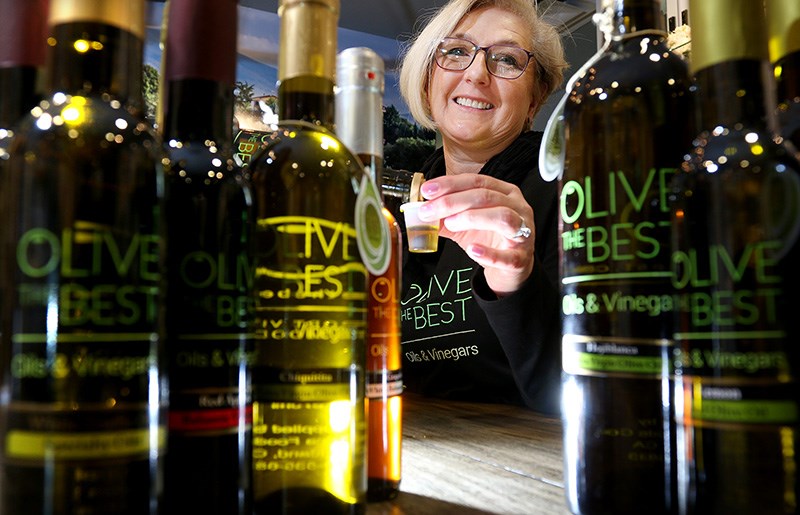 Daniela Hammond samples one of the 60 or so olive oils and balsamic vinegars she offers at her new olive oil dispensary in Port Moody's Newport Village.MARIO BARTEL/THE TRI-CITY NEWS

Daniela Hammond has waded into an oil crisis. But this one doesn’t involve pipelines or the price of gas.

Hammond recently opened her own olive oil shop in Port Moody’s Newport Village even as countries like Italy and Greece that produce bounties of the golden liquid worry about the future of their olive groves that are being ravaged by disease and the effects of climate change.

Hammond said international angst about withering groves that have cut the production of olive oil by more than half in Italy, 35% in Greece and almost 20% in Portugal is fuelled by the deep historical and cultural connection people have with the product that’s been a part of the human diet in some parts of the world since 6000 BC.

“The olive tree is the tree of life,” Hammond said.

The former interior designer who specialized in kitchens and bathrooms decided more than a year ago she needed a change. After several conversations with friends who run a series of olive oil shops on Vancouver Island, she decided to change her focus from creating kitchens to something that’s used to create in kitchens.

Hammond offers about 60 varieties of olive oils and balsamic vinegars in her shop, Olive the Best. They’re all sourced from a supplier in California, but the olives pressed to create the extra virgin, infused and fused oils come from all over the world: Spain, Italy and Portugal in the fall, and southern hemisphere countries like Chile and Australia in the spring and summer. And, like fine wines, they come with a culture and procedures all their own.

Depending on where they’re from, even the soils in which the groves are rooted, olive oils have distinct flavours and characteristics, from the robust Portuguese Cobrancosa, to the delicate creaminess of Spain’s Chiquitita extra virgin. To appreciate the subtle differences, Hammond instructs customers to warm the tiny paper sampling cups in the palm of their hands, then, when the oil has reached body temperature, cup their nose over the vessel to take in its aroma. Then, slurp it over the lips, wash it around the tongue and wait for the peppery hit at the back of the throat.

Hammond said olive oil is a social food, often associated when large families are literally breaking bread around a large communal table. That’s why she has just such a table at the back of her shop, where she conducts tasting workshops.

Hammond said exposure to fine olive oil can change the way a person experiences their food, bringing with it a whole new sense of connection to the earth from which the olives grew, and the regions in which their groves are located.

And once you get your olive oil home, it’s important to treat it with care and respect, Hammond said. That means keeping it in a dark, cool place so it doesn’t turn rancid, and using it up within a year.

“It’s about freshness,” Hammond said, adding premium extra virgin olive oils are often labelled with the date the olives were harvested. “It’s about the processes and the flavours.”

• To learn more about Olive the Best, go to www.olivethebest.ca.