A non-profit group started by a pair of Port Moody secondary students is bringing together girls and young women from across North America who want to pursue their passions for science and technology.
Apr 19, 2021 7:00 PM By: Mario Bartel 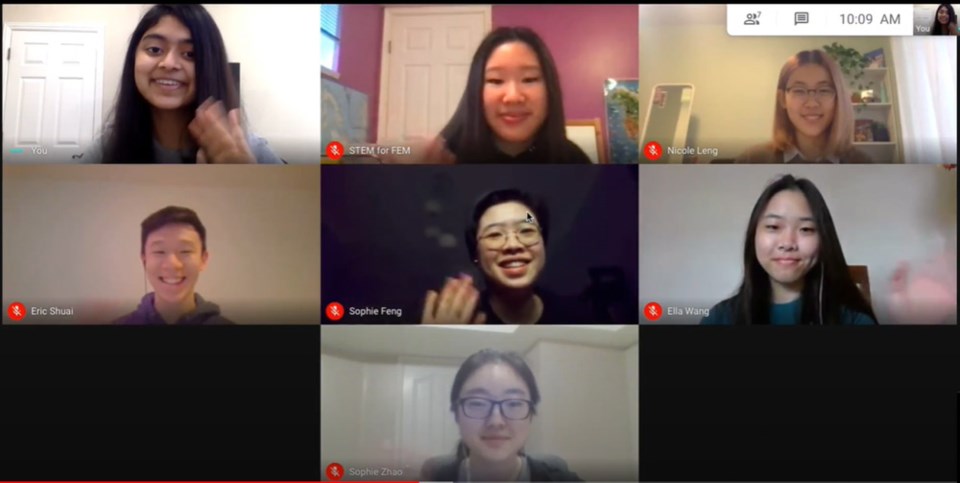 It's only fitting that members of the STEM for FEM executive use technology when meeting to talk about how to inspire young women and girls to puruse their passion for sciences and technology.SCREEN GRAB/SUBMITTED

A pair of Port Moody secondary school students is working to forge a new path into sciences and technology for girls like themselves.

Sophie Feng and Angela Hu are Grade 11 students, in the International Baccalaureate program, with a keen interest in science, technology, engineering and math — better known as STEM.

But everywhere they looked for role models or leaders who might be able to show them a way forward to pursue their passions, they found it was men wearing the lab coats, writing the code and wielding the calculators.

So the two friends put their heads together and started STEM for FEM, a non-profit organization that empowers girls in elementary and middle school to explore their interests in sciences and technology through workshops, guest speaker presentations, online learning and even special events like hackathons that challenge them to problem solve social issues using tech as well as coding boot camps.

Hu said the gender imbalance in sciences and technology can be a discouragement when girls become curious about those fields. “This sometimes made me feel excluded and certainly less comfortable than if there was an even split between boys and other genders.”

Feng said being the only girl keen to do chemistry experiments or work on a project researching endangered animals was a “bit awkward” and even made her feel like she didn’t belong.

Since launching STEM for FEM last year, just as the COVID-19 pandemic was taking hold, the group has established chapters in Saskatoon, New York, Massachusetts and Georgia. Speakers at its first webinar conference last August included a neuroscientist specializing in brain hyperactivity disorders, a software engineer at Google and an electrical engineer with Intel.

Feng and Hu said it’s important to achieve diversity in science and technology because the tools those fields develop must be used by everyone. “By having a diverse groups involved in building these tools, we can ensure a higher likelihood of usability across demographics.”

Even research, they said, often falls into the trap of being conducted from the perspective of Western, educated, industrialized, rich and democratic countries that can limit its application to anyone falling outside that demographic.

The disparities, said Feng and Hu, can mean lost talent as young people who might have pursued their interest in sciences and technology are left behind. “To tackle the emerging global problems in our modern world, we truly need all of the brightest minds working together on these issues.”