Second time was a charm for a condo project being proposed by Bold Developments for the corner of St. Johns Street and Clarke Road in Port Moody. The project received third reading for bylaw and official community plan amendments for the second time last Tuesday.
Dec 2, 2020 9:24 PM By: Mario Bartel 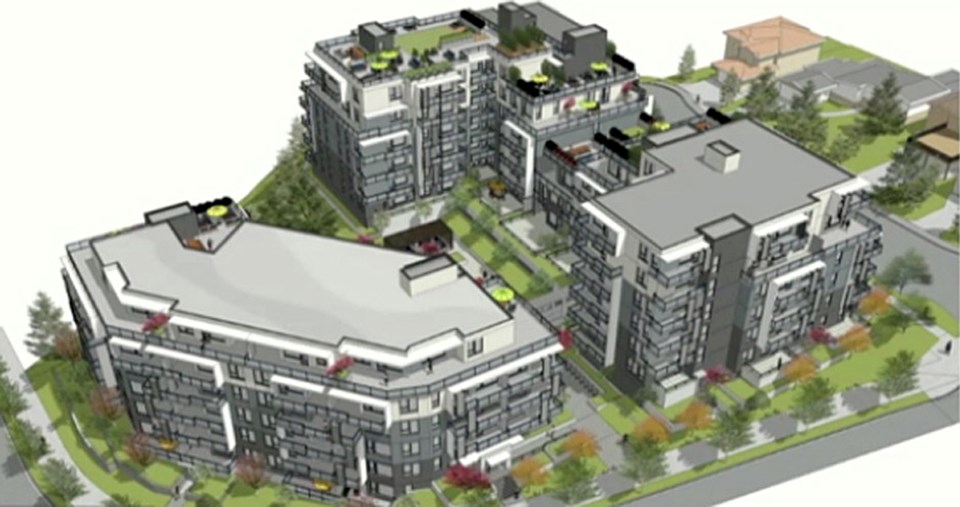 For developer Tommy He, receiving third reading from Port Moody council last Tuesday for a condo project he’s proposing to build at the corner of St. Johns Street — where it meets Clarke Road and Barnet Highway — may have felt like deja-vu.

He, the principal of Bold Developments, had been there before.

His company’s plan to construct a six-storey, 162-unit condo structure at the foot of Snake Hill had cleared third reading of the zoning bylaw and official community plan amendments required for the project to proceed last June.

But when a partnership agreement with BC Housing that would have discounted units by 10% through its Affordable Home Ownership Program fell apart, He was forced to bring a modified pitch to make some of the units more affordable back to council.

After a brief public hearing, during which most speakers voiced their approval for the project, councillors unanimously agreed they liked what He was now offering. That includes increasing to 16 — from 15 — the number of units to be offered to local purchasers through a rent-to-own program that allows them to put two years worth of rental payments toward their down payment.

As well, the project will feature almost 17,000 sq. ft. of outdoor amenity space including several rooftop decks, a children’s play area, a fire pit and BBQ.

The company will also build a multi-use pathway connecting to St. George Street and widen Clarke Road, at the St. Johns Street intersection, to make it safer.

Coun. Diana Dilworth said He’s plan to equip 103 units with some sort of den or office space shows “the applicant has really considered residents having to work where they live because of the pandemic.”

In fact, Mayor Rob Vagramov said, the collapse of He’s deal with BC Housing might be a blessing in disguise as it means taxpayers dollars aren’t being used to subsidize home ownership.

“There’s other priorities that definitely deserve the tax dollars.”