Port Moody is hoping to become a Christmas wonderland with thousands of colourful lights, illuminated garlands and wreaths strung in trees as well as on lamp posts and light standards on major city streets.
Nov 21, 2017 1:18 PM By: Mario Bartel 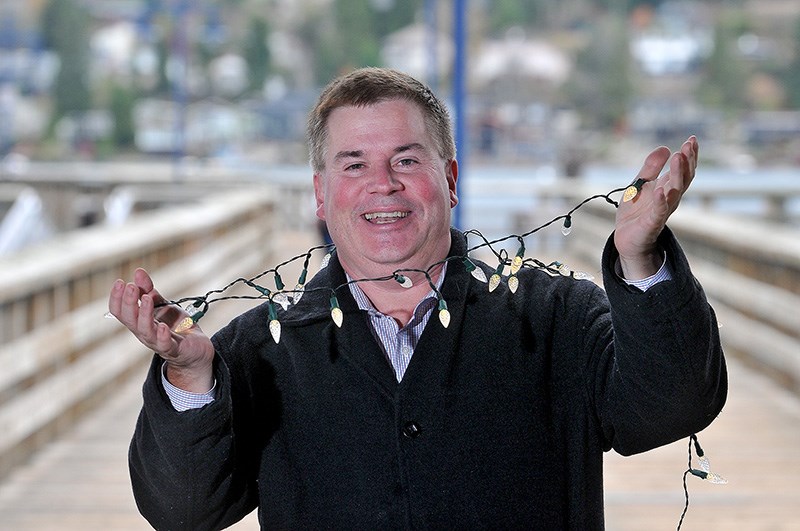 Port Moody mayor Mike Clay looks like he could use a little help to string the thousands of Christmas lights that will be installed on the pier at Rocky Point Park for the city's first Cheer at the Pier holiday event to be held on Dec. 2. The pier and the gazebo, as well as several other key areas around the city, will be lit up for the Christmas season until Jan. 15.MARIO BARTEL/THE TRI-CITY NEWS

Port Moody is hoping to become a Christmas wonderland with thousands of colourful lights, illuminated garlands and wreaths strung in trees as well as on lamp posts and light standards on major city streets.

City council recently approved the expenditure of $30,090 for a festive lighting plan that will add thousands of colourful holiday tree lights along St. Johns, Clarke and Murray streets as well as the large evergreen tree in front of the Port Moody Arts Centre. Large illuminated wreaths and garlands with bows will also be hung on light standards and lamp posts on St. Johns from Queens to Moody streets, and on Clarke from Elgin to Kyle. Light standards on Murray, from Moody to the pedestrian crosswalk will be festooned with large illuminated wreaths or snowflakes. The lights will glow from late November to Jan. 15.

Those are all in addition to the city’s existing holiday lighting and displays at city hall, fire hall #1 and the Queens Street plaza.

But the seasonal centrepiece of the city’s festive feeling will be the new Cheer at the Pier event on Dec. 2, 6 to 8 p.m., when the pier and gazebo at Rocky Point Park will be lit up for the first time. The free event will also feature carollers, rides on a candy cane train, visits with Santa Claus along with an opportunity to write him a letter, as well as hot chocolate, apple cider and sugar cookies. The lights get turned on at 6:30 p.m.

The city is also encouraging local businesses to get in the holiday spirit by offering a chance to win a free business licence worth $505 to each one that decorates its store front with seasonal lighting and posts a photo of it on social media with the #PoMoLights hashtag.

In her report to council, PoMo's manager of communication, Rosemary Lodge, said the city will pursue sponsorship and grant opportunities to make future lighting displays even bigger.

The city of Coquitlam opens its major winter light display on Nov. 25 at 5:30 p.m. Lights at Lafarge will be open nightly from that day through Jan. 21.