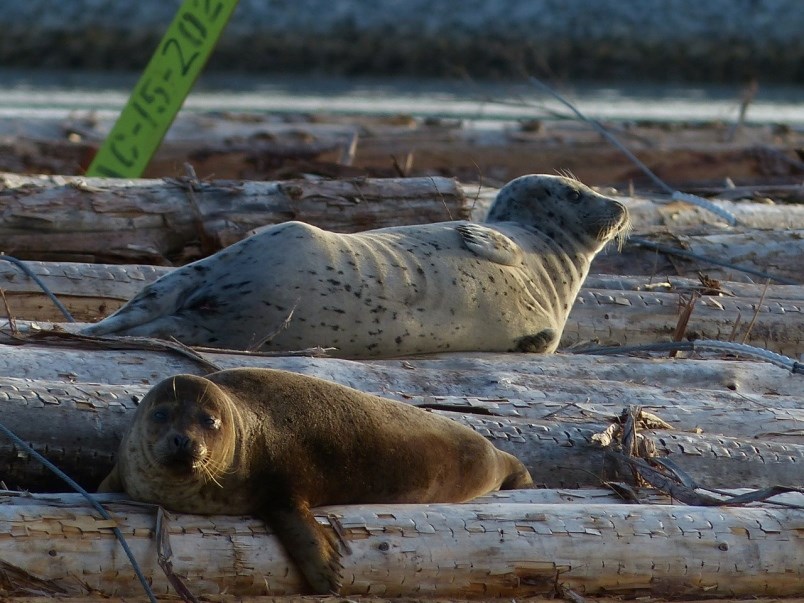 Harbour seals hang out on the log booms that were recently removed from the Port Moody Inlet near the Flavelle sawmill.

Bringing a log boom back into Port Moody Inlet to provide a perch for harbour seals and sea birds to rest or escape predators isn’t as simple as lashing a bunch of logs together and towing them into place.

In fact, said Port Moody councillor Diana Dilworth, it could end up costing the city hundreds of thousands of dollars to obtain access to water lots, acquire and install anchors, pay for liability insurance as well as ongoing maintenance costs.

The log booms had been part of the seascape near the Flavelle sawmill for more than 100 years, but were recently towed away after the mill’s owner, the AP Group, announced its intention to permanently close it by the end of this month.

The sudden disappearance of the booms prompted one marine life expert to declare it a “real disaster” for seals.

Andrew Trites, the director of the University of British Columbia’s Marine Mammal Unit, said seals use the booms as a safe place to protect their pups as natural foreshores are developed.

Tuesday, Mayor Rob Vagramov successfully introduced a motion charging city staff to report back on developing a coexistence strategy for marine wildlife that could include bringing back the booms or creating some sort of artificial replacement.

He said such a strategy would be “in tune” with the city’s bear and beaver management plans.

Coun. Steve Milani said the city “owes it” to the wildlife in its environs.

“They were here first.”

But while Dilworth agreed the idea is “worth exploring,” she said the city has to weigh the expense of restoring the booms against other possible options that could prove less costly and not as risky.

“These logs are not permanent fixtures,” she said. “They move, they come and go, it’s a constant moving force.”