Public record should show what politicians are Zooming in, Coquitlam councillor says

Coquitlam Coun. Bonita Zarrillo wants the city clerk to make a special notation in the minutes to show who is present in the council chambers during civic meetings, and who's taking part electronically.
Feb 9, 2021 2:29 PM By: Janis Cleugh 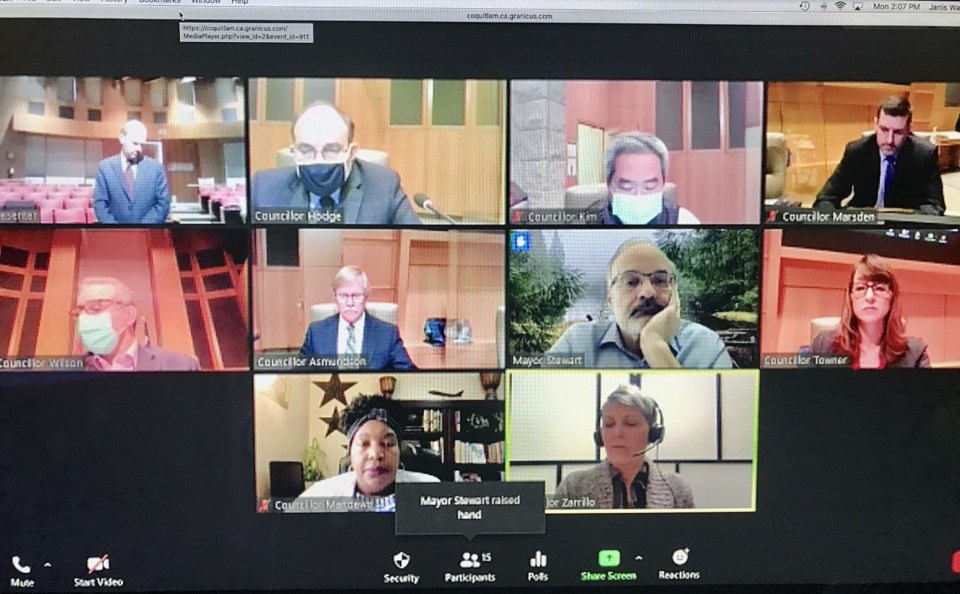 A Coquitlam city councillor who is voicing concern about transparency and accessibility at civic meetings during the pandemic called on council this week to document who’s in the room virtually.

Monday, at the start of the council-in-committee meeting, Coun. Bonita Zarrillo asked city clerk Jay Gilbert to distinguish in the minutes who was present at the last city hall meeting and who attended via Zoom.

The practice is common for Metro Vancouver regional board and committee meetings, where the corporate officer denotes with an asterisk in the minutes if politicians are present remotely — although there is no regulation to do so, said media relations manager Don Bradley.

In Maple Ridge, one of the few B.C. municipalities still holding hybrid meetings — allowing in-person attendance (as allowed under exemption by the provincial health officer) or by virtual means — its city clerk makes a note on the minutes to show who has participated electronically.

In Coquitlam, which also permits the hybrid option, city staff say the Plexiglas barriers at councillors’ cubicles and physical-distancing measures are enough to meet safely.

Zarrillo, however, argues the mixed model changes the meeting dynamics and doesn't provide for equal access. And she said it’s “hard to fulfill the role” of an elected official when some council members are physically present and others are not, or can’t be due to health and safety fears.

Having a special notation in the minutes, she told the Tri-City News on Tuesday, “is about accountability to the electorate. We need to uphold the transparency of the local government.”

Zarrillo also argued the provincial health officer’s exemption to host in-person council meetings only applies when a virtual platform isn’t possible or available, and she claimed the ministerial order specifies that the meeting minutes indicate who’s in their council seat and who’s working remotely.

Still, Gilbert told council-in-committee Monday that not distinguishing who is in the council chambers “has been a deliberate decision”; councillors are either marked present or absent.

Mayor Richard Stewart, who took part in Monday’s meeting virtually, said he didn’t want to be singled out in the minutes, as there are times when he’s had to lie down during city meetings because of his back injury and he “would feel really awkward if the minutes recorded” he wasn’t at the table.

Last month, before webcams were installed at councillors’ desks, Zarrillo attended the council chambers for the first time in months, writing on Facebook that she felt "uncomfortable" with so many people in the room — many of them unmasked in their cubicles (but masked if they left).

He added, “It’s a choice [to attend in-person]. I don’t think it’s fair that we’re getting dictated to by one councillor. It’s her opinion and it’s not valid. It’s misinformation.”

Meanwhile, Kathleen Vincent, Coquitlam’s communications manager, confirmed Tuesday that the city clerk’s office will review how other jurisdictions are approaching minute-taking during the pandemic, but “there are no plans at this stage to bring a formal report back to council.”