The Redbrick Properties project at Charland Avenue will be the first purpose-built rental building in Coquitlam in 40 years.
Oct 6, 2016 2:44 PM By: Sarah Payne 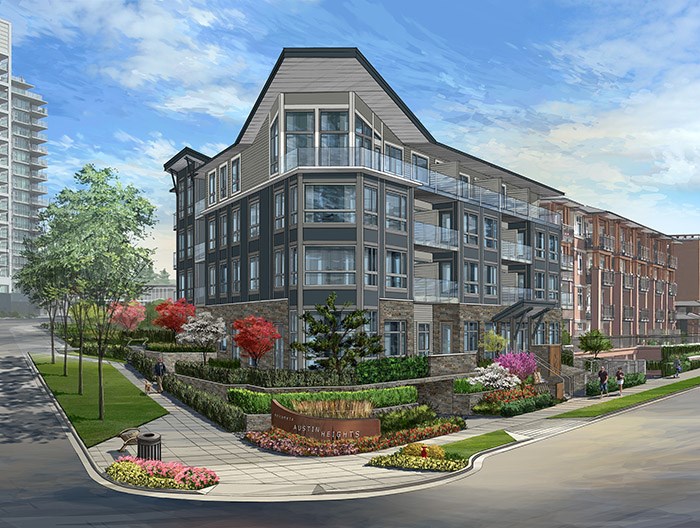 Coquitlam could see its first purpose-built rental apartment building in several decades finished within the next two years.

The Redbrick Properties Inc. building will feature 41 units — one studio, 34 one-bedrooms and six two-bedrooms — that will remain rentals for the life of the building. A housing agreement bylaw also approved Monday requires that the units not be stratified and cannot be rented for less than 30 consecutive days to prevent Airbnb-style rentals.

"In approving this market rental housing development, the city of Coquitlam's council has shown true leadership and has demonstrated they absolutely intend to fulfill the objectives of their recently endorsed Housing Affordability Strategy," said Abdul Jiwan, Redbrick Properties president, in a written statement.

Jiwan said the building will be the first standalone market rental project to be built in Coquitlam in the last 40 years.

The Charland entry will include a water feature, cultured-stone retaining walls, "Welcome to Austin Heights" signage and prominent corner treatments, according to a staff report.

Redbrick justified the reduction, saying it would increase the amount of rentable square footage and keep construction costs lower, adding without the need for strata council meetings the indoor amenity space isn't necessary.

Parking will also be reduced, from 52 spaces (44 resident and eight visitor spaces) to 44 (41 resident and three visitor).

A study of nearby rental buildings showed they required less parking. Redbrick has also partnered with ZipCar to provide an on-street car share service with a one-year membership included for initial tenants.

Jiwan said they hope to begin construction early in the new year and have the building ready in about 18 months. Market rental rates have yet to be determined, however; since Redbrick initiated their proposal in late 2014 their construction cost estimates have risen by 38%.