The Fur-Bearers offers $1,500 reward, calls for changes to allow municipalities to regulate traps in urban areas
Dec 21, 2019 8:10 AM By: Diane Strandberg 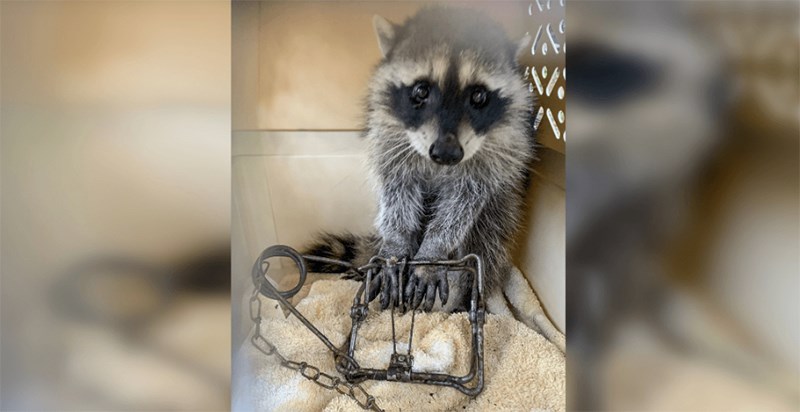 An example of a raccoon caught in a trap.The Fur-Bearers

And in the most recent case, The Fur-Bearers is offering a $1,500 reward for information leading to identification and conviction of the person responsible.

According to the non-profit society that's dedicated to stopping trapping cruelty and protecting fur-bearing animals, on Dec. 9, a raccoon was found dehydrated and dragging a Conibear trap in PoCo. The animal was taken to Critter Care Wildlife Society in Langley but had to be euthanized because its injuries were too serious.

This is the second known incident of a raccoon being injured by a trap in Port Coquitlam this year. In the summer, a raccoon had its paw chopped off by a rat trap in a neighbourhood near Terry Fox secondary school. The creature was still getting around, although hampered by its missing paw.

The Fur-Bearers says the use of urban traps should be regulated by municipalities because the situation is getting out of control, with the number of trap-related injuries doubling since 2017.

Currently, the province has jurisdiction but if cities were allowed to pass bylaws regulating the use of traps, there would be more opportunities for education and the posting of signage to warn people when they are being used, the group says.

“These are only cases that are reported to Critter Care and does not include incidents outside of their range or domestic animals like dogs and cats who are also injured or killed by traps,” he said.

The traps are easy to purchase, are usually leg-hold or Conibear traps, and will be delivered to your door without question, Howie said, making them a problem in areas where they can be accessed by domestic animals. Even children could be hurt if they get a limb caught, he said.

“Year after year, we see animals suffering, and this includes domestic cats and dogs,” Howie said.

By offering a reward, the group is hoping to get information about the PoCo incident as well as similar one in Richmond, where a raccoon was spotted dragging a trap clamped on its paw.

“We want people to know that [traps] are out there, and by putting up a reward, if people heard about something… they should forward it to the [Report All Poachers and Polluters] line and that could help get an investigation started. We are hoping to get people talking, the same way as Crime Stoppers does.”

In addition to a reward for information, The Fur-Bearers are asking people to send a letter to their MLA demanding municipalities be given more clout to regulate traps in urban areas.

1705
Letter: New Coquitlam residents need to adapt to living on the edge of wilderness
886
‘What are they waiting for?’ asks Coquitlam parent worried about long wait for school isolation letter
836
Dentists, midwives and more approved to assist in B.C. vaccination clinics
753
Parent says Port Moody minor hockey not giving a full account of its COVID cases
712
New garden centre hopes to take root in Port Moody