Rainbow window is about 'tolerance and acceptance' 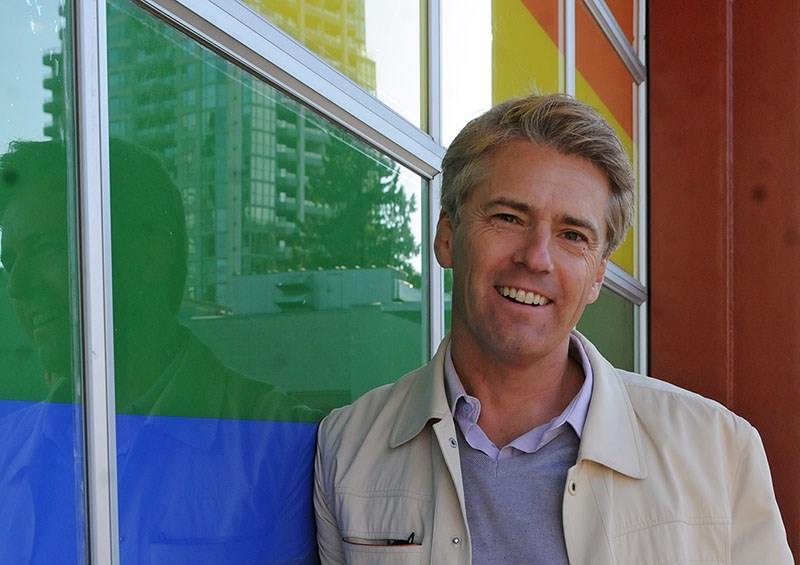 Jon-Paul Walden, executive director of the Evergreen Cultural Centre in Coquitlam, at the rainbow window on Thursday.JANIS CLEUGH

This week, the nearby Evergreen Cultural Centre (ECC) gave a response of its own, installing the colours of the rainbow on large doors facing Guildford Way.

On Wednesday, just before hundreds of people filed into city hall for its annual Welcome to Coquitlam gathering, ECC installed a rainbow covering on the glass door entrance to Studio D, a rental space used for teaching.

The public statement is timely. Not only is the venue hosting this week the show End of the Rainbow — a salute to Judy Garland, an icon in the LGBTQ community — but it’s also responding to the discussion by city council and the public about a proposal for a rainbow crosswalk.

Since then, hundreds of comments have been posted — some against, some in favour — on The Tri-City News’ Facebook page.

The mixed reviews are in contrast to what’s happening in Port Moody, where Amy Anne Lubik’s request for a rainbow crosswalk was approved last week by council, which hasn’t yet chosen a  location.

Andrea Jabour, Evergreen’s marketing manager, stressed ECC’s rainbow window covering isn’t intended to put political pressure on Coquitlam city council, which is expected to revive its discussion at council-in-committee on Oct. 2 after a request on Monday by Coun. Chris Wilson; rather, “It’s a positive message. This facility doesn’t represent one person or group. We are inclusive and diverse.”

Jabour said ECC staff didn’t consult with the city, which owns the building, or with its board before it placed the 20 vinyl stickers on the glass.

Jon-Paul Walden, Evergreen’s executive director, said the venue has done similar creative projects in the past, citing the rainbow steps in front of the art gallery that went in last year.

Walden, who is also a member of the city’s cultural services advisory committee, said he attended the Welcome to Coquitlam event on Wednesday and received “90% support” for the Evergreen rainbow window.

“We want to be active in the community because, as an arts centre, we are all about inclusiveness, expression and identity,” he said. “We want everybody to feel comfortable approaching our centre.”

The rainbow covering is a collaboration with two Coquitlam companies: Spin Key Media, operated by Jeff and Coriana Burke, and Sandpiper Signs and Decals Inc., co-owned by Carlo Zarrillo — the chair of the Tri-Cities Chamber of Commerce board and husband of Coun. Bonita Zarrillo, who has said she’s in favour of a rainbow crosswalk. Both firms donated time and materials for the rainbow covering, worth about $800, Jabour said.

“I think we are sending a message about what we would like to see in our community,” Coriana Burke of Spin Key Media said. “This is just our way of contributing to something that we believe in.”

She added: “Who doesn’t like a rainbow? If you see a rainbow in the sky, do you get pissed off? No, it’s pretty. It brightens your day. We are inspiring the community and we are reflecting it. This is about tolerance and acceptance.”

As well, Evergreen is challenging other Tri-City businesses to display rainbow colours “in whatever form that looks like to them to help us show how inclusive and full of colour the Tri-Cities are,” Jabour said, adding participating companies are encouraged to use the social media hashtag #showyourrainbow.

A RAINBOW IN POCO

In Port Coquitlam, a rainbow project is already underway.

The city’s director of recreation, Lori Bowie, told The Tri-City News that municipal staff were approached last year by a local church group to install a rainbow crosswalk. Council set aside $9,000 in its 2017/’18 budget to explore options.

“Over the next few months, staff will engage with community stakeholders to come up with project ideas, which will then be presented to council for a decision,” Bowie wrote in an email. “The city is also committed to ensuring that our arts/culture programming reflects and is inclusive of the diversity in our community, including the LGBTQ community.”

Proposals can be emailed to PoCo’s manager of culture, Carrie Nimmo, at nimmoc@portcoquitlam.ca.