Port Moody Mayor Rob Vagramov says 14 months of convening meetings virtually has demonstrated the value of keeping a digital archive of all proceedings, including closed meetings. But his proposal to begin recording such private proceedings was rejected by other counsellors on Tuesday.
May 14, 2021 6:12 AM By: Mario Bartel 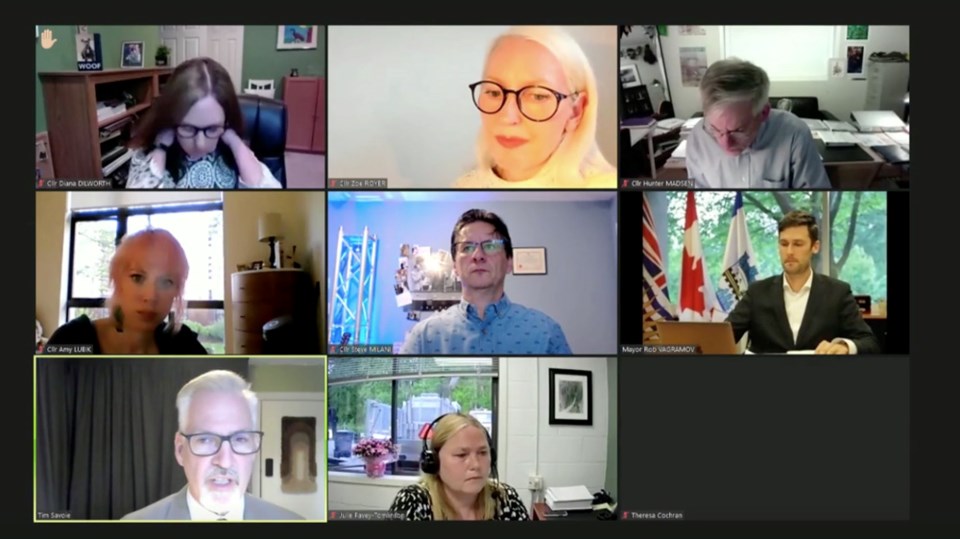 Port Moody Mayor Rob Vagramov says 14 months of convening meetings virtually has demonstrated the value of keeping a digital archive of all proceedings, including closed meetings. But his proposal to begin recording such private proceedings was rejected by other counsellors on Tuesday.SCREENGRAB

There will be no Watergate-type scandal of secret recordings of meetings being leaked in Port Moody.

That was the fear of several councillors Tuesday as they rejected a proposal by Mayor Rob Vagramov for city staff to investigate the possibility of making digital recordings of council’s closed meetings.

Such sessions are held to discuss sensitive financial, property and personnel matters and the result of those discussions is only released to the public later by a council vote.

But Vagramov said council’s experience conducting its meetings virtually for the past 14 months has showed the value of having a digital archive that can be used by councillors to look back on past discussions and have a precise record of what was said and by whom.

He said written minutes of meetings are “most rudimentary.”

“It’s helpful to go back on our meetings to make sure you hear everything correctly,” Vagramov told council.

In a report, he said the recordings of closed meetings would:

• could even be destroyed at the end of each council term

He added the act of recording the meetings might even promote greater civility among councillors during discussion — something that has been in short supply recently.

But Coun. Diana Dilworth was alarmed by Vagramov’s proposition.

“I’m surprised we’re having a discussion about recording closed meetings,” she said. “There’s a reason we don’t tape those meetings.”

Primary among those, she said, would be the fear that recordings or their contents could be leaked and used against members of council.

Such a possibility isn’t entirely preposterous.

In fact, in 1972 archived recordings of conversations in the White House between then-president Richard Nixon, administration officials, family members and staff helped bring about his downfall.

That came after 18-and-a-half minutes of a discussion he had with chief of staff H.R. Haldeman three days after the break-in of Democratic National Committee headquarters in the Watergate hotel were mysteriously erased.

Subsequent investigation of the recordings determined there was a link to the cover-up of the Watergate burglaries; Nixon resigned before he could be impeached.

“What this does is create a library of additional material that can be cut and pasted in any manner of ways,” she said.

“I’d be a little concerned about people being able to get into closed city records,” she said. “Things happen in closed meetings for a reason.”

A spokesperson for the Ministry of Municipal Affairs said local governments have the authority to determine practices around recording and releasing information from closed meetings. They also set the rules for managing meetings whether they’re held in-person or remotely.