SD43 students compete to send experiment to the International Space Station for testing by astronauts
Sep 23, 2016 1:36 PM By: Diane Strandberg 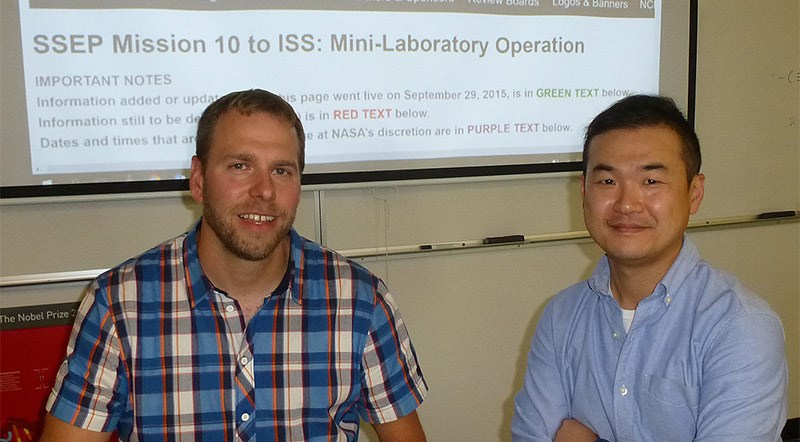 Students attending classes taught by Dr. Charles Best science teachers Wooje Choi and Brent Raabe will be among 1,600 School District 43 students in Grade 5 to 12 who will work on coming up with a science experiment that could be conducted by astronauts aboard the International Space Station.Diane Strandberg

How do things function in a weightless environment?

That's the question 1,600 School District 43 students in Grades 5 to 12 are asking as they work to come up with an experiment that could be tested by astronauts aboard the International Space Station (ISS).

At the Sept. 12 school board meeting, district officials announced that SD43 has been selected among thousands of U.S. and other international schools and colleges to participate in the Student Spaceflight Experiments Program (SSEP) run by the National Centre for Earth and Space Science Education.

Participating students are thinking up questions for an experiment to study how a weightless environment in zero gravity could affect physical, chemical or biological systems, such as seeds, crystals, bacteria and tiny aquatic life. They are working in teams of three to five, in classes or science clubs, to write a proposal for an experiment that could be transported in a small tube to the ISS and then carried out by astronauts. An equivalent experiment is done on the ground at the same time, with the winning team compiling the data and presenting it at a conference in July, 2017.

Only one team will be selected out of all those participating in a two-step process that will vet the experiment based on various criteria, including safety.

Michelle Ciolfitto, learning services coordinator with SD43, told trustees that 300 students were expected to sign up to participate but 1,600 wanted to join SSEP, with 45 teachers involved, as well.

She said the space experiment ties in with the revised curriculum because it encourages students to work together to solve real world problems. "Students usually learn and do a test," she said. "[This encourages them] to ask what's important, what do you know."

Dr. Charles Best science teachers Wooje Choi and Brent Raabe said their physics and chemistry students will have to work quickly to come up with a space experiment proposal that hasn't been tried before and meets the criteria.

Currently, students are learning about zero gravity (weightless environment) and brainstorming ideas, with the goal of having completed proposals by Nov. 4. "They need to have specific instructions that astronauts will do," Rabbe said, adding "for sure this is an opportunity of a lifetime."

Today, participating students took part in a conference at Port Moody's Heritage Woods secondary school to learn from Simon Fraser University grads how to do real-world science research, write proposals and come up with experiments that can go to space.

In addition to submitting project proposals, SD43 students from kindergarten to Grade 12 will have the opportunity to submit a design for a "Mission Patch" that may, if selected, also fly aboard the ISS.

• SD43 student teams will design an experiment to study the effects of microgravity (a weightless environment) on a physical, chemical or biological system, which could, if selected, be carried out aboard the International Space Station (ISS) over a period of a couple of days to a month in the spring of 2017. (A similar experiment will be conducted on the ground at the same time, with students gathering and analyzing the data.)

• Student experiments must meet specific criteria, including safety, and will be reviewed by experts, with the winning proposal announced by the Student Spaceflight Experiments Program (SSEP) National Step 2 Review Board at the Smithsonian in Washington, DC on Dec. 15.

• The science experiment has to fit in a small, pliable rubber tube approximately six inches long. Astronaut scientists would open the tube, mixing together the substances, based on the student experiment specifications.

• The selected mini-lab and instructions will be carried to orbit in a payload box, with the U.S. $24,000 cost to be paid for by supporting organizations. Among the partners in the SD43 program are: Simon Fraser University, Magellan Aerospace, Finger Food Studios, UrtheCast and MacDonald Dettwiler and Associates.

• To date, over 14,300 formal research proposals have been submitted by student teams with 185 experiments having been selected for flight.

ª The experiment would be part of the SSEP Mission 11 payload to the ISS, currently planned to launch on a SpaceX Falcon-9 rocket from Cape Canaveral Air Force Station in Florida. Since the SSEP program started in 2010, 138 experiments have flown to the ISS and returned to Earth for analysis by their student flight teams.

• According to the European Space agency website, the International Space Station is flying 400 km above the Earth at speeds of 28,800 km/h. It takes only 90 minutes for the weightless laboratory to complete a circuit of the Earth and astronauts working and living on the station experience 16 sunrises and sunsets each day.