The parents of Mona Wang, a UBC Okanagan nursing student who was seen in a video being dragged and stepped on by a police officer during a wellness check, shared an open letter on social media recently demanding that the officer “pay the price for he
Jul 9, 2020 5:30 PM By: Nono Shen 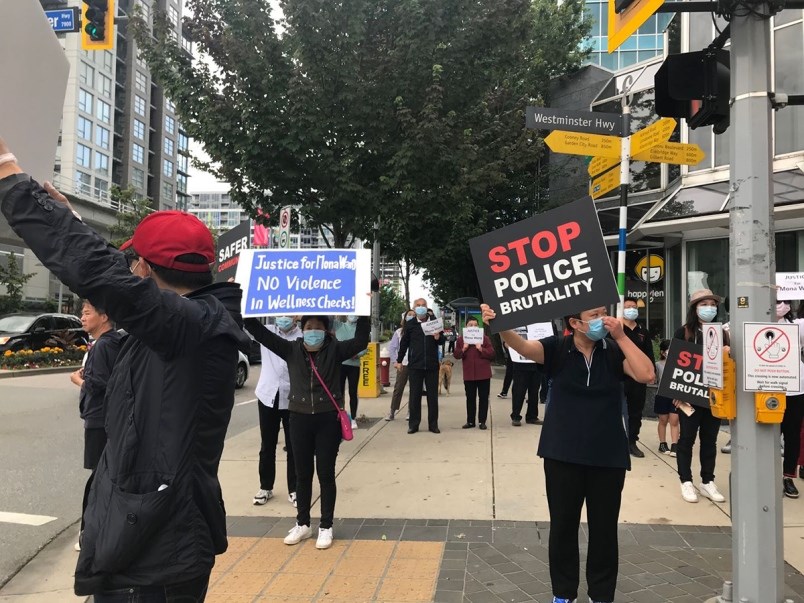 Richmond residents held a rally on last Saturday to show support for Mona Wang, a UBC nursing student who was dragged and stepped on by an RCMP officer during the mental awareness check.

The parents of Mona Wang, a UBC Okanagan nursing student who was seen in a video being dragged and stepped on by a police officer during a wellness check, shared an open letter on social media recently demanding that the officer “pay the price for her excessive use of violence.”

“We felt extremely shocked, sad and angry following the incident. What we were looking for was help from the police, instead of further harm and humiliation. Mental illness is like any other medical illness, which shouldn’t be treated with discrimination and abuse,” read a Chinese statement provided by Wang’s mother Li Yan and her husband, and posted on WeChat.

“Mona is now lawyered up and has launched a civil suit against officer Lacey Browning, which will require (the Kelowna RCMP officer) to be responsible for her actions and pay the price for abusive use of violence,” the letter continues.

In a video that surfaced on June 23, it appears Wang, 20, was dragged down the hallway of her residence and stepped on the head by Browning during a wellness check. As a result, protests were held last weekend in Richmond. Another protest is being planned for Richmond and across B.C. this Saturday to support Wang and call for an end to police brutality.

The statement issued by Wang’s parents explained their family lives in Vancouver. They immigrated to Canada as skilled workers in 2005 when Wang was only five years old.

Wang’s parents said since immigrating they have been working hard, paying taxes, obeying Canadian laws and raising kids, one of which is Wang, whom they describe in their letter as a “very gentle and kind child.” She was accepted into UBC’s School of Nursing due to her excellent grades, the letter adds.

“Unfortunately, Mona had a panic attack in January this year due to academic pressure, so she took too much Tylenol and Melatonin to commit suicide. Her boyfriend grew concerned and called emergency asking for someone to check on her when she stopped responding to his texts. Officer Lacey Browning arrived on the scene alone,” reads the letter.

Wang’s parents allege that Browning used excessive force, stepping on her arms with her boots, kicking her stomach and leaving her with bruises all over her body and bleeding eyes.

“Mona has suffered tremendous trauma and pain both physically and mentally, she had to stay in the hospital for three days,” said the letter.

Li Yan will appear at a “Justice for Mona Wang” rally on July 11 in Vancouver. Rallies will also be held in Richmond, Kelowna and Surrey that same day.

Meanwhile, Browning has been placed on administrative leave and is facing a code of conduct investigation.