Students use robotics to put theory into practice

Brodie Milne can use physics to get a robot to launch a ball at a target. Jamie Owens uses calculus to get that robot to climb obstacles. And Kelly Yee uses logic and process to design the robot that can complete those tasks.
Jan 30, 2019 2:00 PM By: Mario Bartel 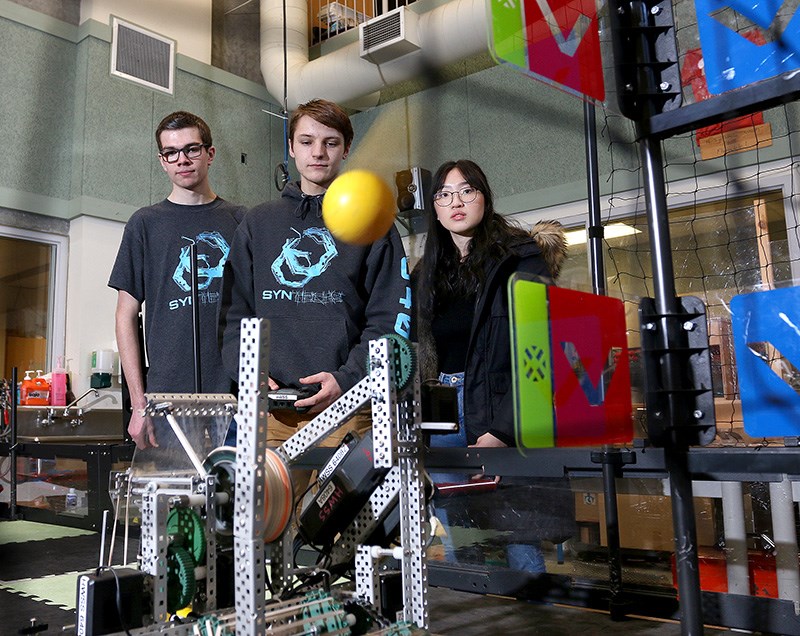 Jamie Owens, Brodie Milne and Kelly Yee, members of one of the robotics teams at Heritage Woods secondary school, practise launching balls at targets in the arena. The school is hosting a major regional robotics competition on Feb. 2.MARIO BARTEL/THE TRI-CITY NEWS

Brodie Milne can use physics to get a robot to launch a ball at a target.

Jamie Owens uses calculus to get that robot to climb obstacles.

And Kelly Yee uses logic and process to design the robot that can complete those tasks.

The Grade 12 students at Heritage Woods secondary are part of one of five teams from the Port Moody school that will be competing Saturday when it hosts the first regional robotics competition to be held in School District 43.

Their teacher and advisor in all things robotics, James Zhuang, said about 60 teams of three or four students from across the province will be competing in four arenas set up in the school’s gym with the aim of qualifying for the provincial championships to be held one month later at Delta's Seaquam secondary. The remotely-controlled craft they design and build from a roster of common parts will have to do things like collect and shoot balls towards a target, climb a six-inch platform, flip caps or stack them to different heights.

Zhuang said hosting the meet is a payoff for growing the robotics club at Heritage Woods from a single competitive team three years ago to five teams this year that travel to competitions around the province as well as students who are just keen to learn about designing, programming and building robots.

Milne, Owens, Yee and programmer Kurt Querengesser came together as one of those teams in September, migrating their skills and experiences from different teams in hopes of finding a winning amalgam.

Yee is the team’s designer. It’s her job to determine how the available parts can be put together to accomplish the competitive tasks their robot has to complete.

Owens is the builder who actually puts those parts together in a working model that can work autonomously for 15 seconds and then accomplish its tasks by remote control in one minute, 45 seconds.

Querengesser is the programmer who was recruited to the team for his ability to translate commands and tasks into digital code.

Milne is the driver, whose dexterity with the game pad will be critical on competition day.

Over the course of the past several months, the team’s robot has undergone several changes in its design, construction and programming, Milne said, as they’ve had to solve problems or tested new ideas to make it more efficient.

One of those was their determination to use a flywheel instead of a puncher to propel the yellow plastic balls at the target flags because it’s easier to troubleshoot when its accuracy or trajectory needs tweaking.

Yee said seeing her design ideas in action is exciting but when things go wrong, she has to walk backwards through her plans in a logical and ordered way to determine the origins of the problem and how it can be fixed.

“There’s a lot of things you have to account for,” she told The Tri-City News. “It’s like trial and error.”

This season, some of those problems have included an overheating motor, a flywheel that operated too slowly to properly propel the ball, and a wobbly frame.

As the driver, Milne experiences those problems first hand, often in the heat of competition.

That’s when the team has to go back to the drawing board and tool kit to fix things before they’re called back to the arena for the next round.

Zhuang said the atmosphere of a robotics competition can be intense.

“You have to work together as a team,” he said, adding the students have been spending 15 to 20 hours a week crafting and perfecting their robots since the beginning of the school year.

But, Milne said, the effort pays off when the robot works exactly as it was designed and programmed, and the theoretical lessons of math and physics learned on a whiteboard have played out in real life in the arena.

“It’s a really neat feeling to see all the hard work is actually working,” he said. “We learned this in class and now we’re actually using it.”

• The robotics competition at Heritage Woods secondary gets underway Saturday, Feb. 2 at 9 a.m., with playoffs expected to begin at around 3 p.m., followed by an awards ceremony.