Telescopes will soon be on loan at Coquitlam Public Library

Starting next month, telescopes will be available for loan as part of CPL's effort to become more interactive, said its executive director Todd Gnissios.
Jun 18, 2019 2:39 PM By: Gary Mckenna 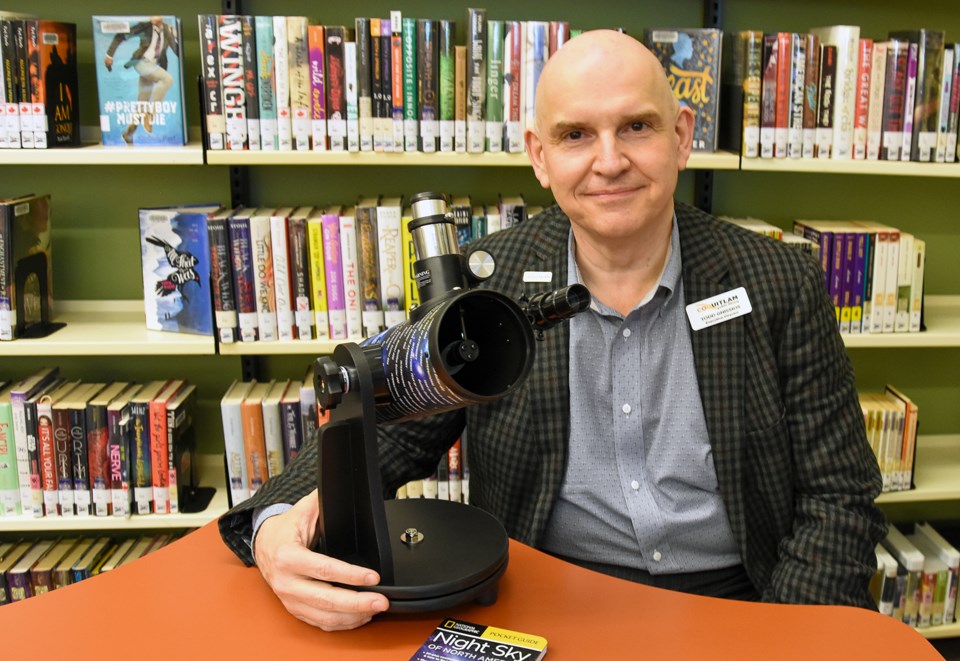 Todd Gnissios, the executive director of the Coquitlam Public Library, said an initiative to loan out telescopes is part of the library’s effort to become more interactive.Gary McKenna

Before Galileo Galilei could become the father of observational astronomy and discover the four largest moons of Jupiter, he first had to design and build his own telescope.

Today, all he would need was a Coquitlam Public Library card.

Starting next month, telescopes will be available for loan as part of CPL's effort to become more interactive, said its executive director Todd Gnissios.

“We are not the first library to do it,” he said, noting Port Coquitlam's Terry Fox Library has had a similar program for close to a year. “We essentially went and stole the idea."

“Information is becoming more interactive," he added. "People want to learn things in groups and they want to interact with it.”

The Skywatcher Heritage 76 Dobsonian desktop telescopes will come in a carrying case with two eyepieces (4 mm and 20 mm) and a copy of the National Geographic Night Sky of North America guidebook. Gnissios said librarians can also recommend some helpful online instructional videos.

While details are still being worked out, the telescopes are expected to be loaned out for three weeks at a time.

Space is a hot topic among library-goers, Gnissios said, noting the impetus for acquiring the telescopes grew out of the popularity of the library’s astronomy info sessions that were held earlier this year.

“We ended up getting over 60 people attending,” he said. “We had another one and there was even more people.”

For those people and others, representatives of Canadian Mobile Planetarium will be in town to help launch the library’s telescope program. People can learn about the moon and the stars inside an inflatable planetarium at the Poirier branch July 16 at 10:30 a.m. and at the City Centre branch July 17 at 1:30 p.m. The event will be hosted by Bill Burnyeat, the resident astronomer at BCIT and an instructor in the continuing studies program at Simon Fraser University.

According to the CPL, Spheros and Ozobots are small robots that follow programmable instructions to move, make noise and change colour. The small robots will soon be on loan from the library.

“Learning comes in so many forms these days,” said CPL deputy director Silvana Harwood. “The library is moving forward with providing some of the tools we think are critical to our citizens, no matter what their age.”