The federal Liberals awarded $150 million to the Terry Fox Research Institute Tuesday, to create an online program for researchers to share cancer information and study patterns in patients.
Mar 20, 2019 11:41 AM By: Janis Cleugh 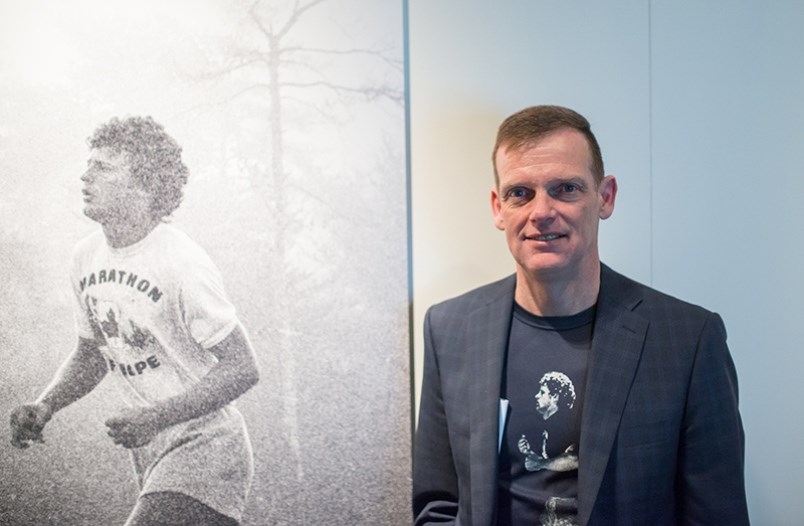 A federal grant to the research institute named after a Port Coquitlam hero will help pay for a new digital database for top Canadian cancer centres to share information about their patients.

Tuesday, the Liberal government unveiled in its pre-election budget a proposal to award the Terry Fox Research Institute, which is based in Vancouver, with up to $150 million over five years — starting this year — to create a national Marathon of Hope Centre Centres Network; the Institute would match the cash with its own money plus contributions from other hospitals and foundations.

The framework will be launched in Newfoundland on April 12, the place and date where Fox dipped his artificial leg in 1980 before he started his cross-country run to raise money for cancer research.

Touted as a “road map to cure cancer,” the network is designed to allow cancer centres to share medical data about patients, to study DNA patterns, to personalize therapies through what is being called “Precision Medicine” and to relay the outcomes with the aim to help save lives across Canada.

“We are pretty proud and excited,” Darrell Fox, Terry’s brother, told The Tri-City News today (Wednesday). “Regardless of where you are diagnosed in the country, you should be able to receive the same treatment as everyone else, no matter what city you live in…. This is accomplishing Terry’s goal.”

Fox said the network is unique to Canada and is set to draw medical talent from around the world.

Under the new program, institutes can apply for a Marathon of Hope Cancer Centre designation. The Terry Fox Research Institute (TFRI) will then establish at least five hot spots or consortia in Canada.

These centres will join forces to make the country’s largest cancer genome database, which will have 15,000 cancer genomes with treatment and outcome data in five years, and available to researchers.

That means that anywhere a cancer is treated in the system, the collaborators can use that information to look at how it responded to a certain drug and to tailor a therapy for a cancer patient.

The online network builds on work started two years ago by the TFRI, the Princess Margaret Cancer Centre in Toronto and BC Cancer in Vancouver to share, store and analyze data with researchers.

Last year, the TFRI launched its second pilot project for Precision Medicine — called the Montreal Cancer Consortium — where four hospitals and three cancer centres in the city worked on programs to improve immunotherapy for melanoma and leukemia patients, and share that data in the network.

Similar corsortias are now being established by the TFRI in the Atlantic provinces as well as the Prairies, also with the goal to eventually designate participating facilities as network members.

Coquitlam-Port Coquitlam Liberal MP Ron McKinnon told The Tri-City News on Wednesday he met with TFRI representatives last summer in the riding “and we’ve been lobbying for their ask ever since…. Cancer affects my constituents and the core of that organization is right in our riding.”