The Canucks aren’t kids anymore, but the Game 7 excitement remains 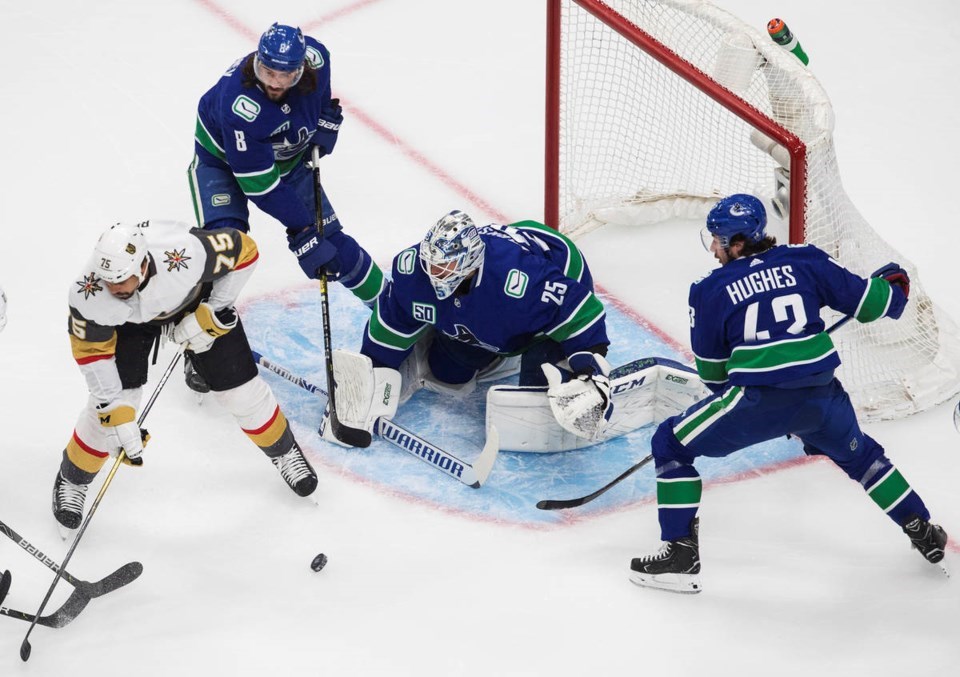 There are certain moments you dream about playing sports as a kid. You’re up to bat in the bottom of the 9th, down by three with the bases loaded. Down by two in the NBA championships, with the final seconds ticking off the clock, your feet behind the three-point arc, and the ball in your hands.

And, of course, you have the puck on your stick on a breakaway in Game 7 of the Stanley Cup Finals.

“I think every kid growing up, whether it was playing mini-sticks or playing road hockey, you simulate that you were playing Game 7 for the Cup,” said Tanner Pearson on Friday morning. “It’s funny to look back on.”

It may not be the Finals, but there’s still a buzz of excitement for the Canucks as they head into an improbable Game 7 after going down 3-1 in the series against the Vegas Golden Knights.

“This is what you want to play, the game you want to play in all year,” said Thatcher Demko after Thursday’s monumental Game 6. “Watching Game 7s as a kid, you’re envisioning yourself in those games.”

Now Demko, barring a miraculous recovery by Jacob Markstrom, will be in a Game 7 in the Stanley Cup Playoffs. It’s largely his doing, as he’s made 90 saves over the past two games with the Canucks facing elimination, including a 48-save shutout in Game 6.

The 24-year-old Demko is not the only young Canuck that has put the team on his shoulders, only the most recent.

25-year-old captain Bo Horvat leads the entire NHL in goalscoring in the playoffs with 10 goals. His fellow 25 year old, Tyler Motte, has been the Canucks’ best penalty killer, while also coming through with a few clutch goals. 23-year-old Brock Boeser has quietly played a crucial role, while putting up 11 points in 16 games.

The team’s most important skaters have also been their youngest. 21-year-old Elias Pettersson has 7 goals and 18 points in the playoffs, good for fourth in the NHL, while also doing all the little things away from the puck that help a team win, such as the two screens he set on two big goals in Game 6.

Then there’s 20-year-old Quinn Hughes, who has quickly established himself as one of the best defencemen in the NHL. He’s already set a record for most assists by a rookie defenceman in a single postseason and his 16 points in 16 games is good for 9th in playoff scoring, 2nd among defencemen. Now he’s set to lead the Canucks into a do-or-die Game 7.

Hughes, as the closest to still being a kid on the Canucks’ roster, is the team’s authority on what it’s like being a kid, so you can trust him. Of course, as a defenceman averaging nearly 23 minutes per game in the Stanley Cup Playoffs while matched up against some of the best forwards in the NHL, Hughes isn’t a kid anymore. None of the Canucks’ youth can be considered kids after this postseason.

The team’s young players don’t even look like kids anymore, sporting playoff beards that are far removed from the peach fuzz you might see from other rookies and young players, or even established veterans. Sorry, Sidney Crosby.

That’s why that excitement heading into Game 7 is also balanced with quiet confidence and steadfast determination.

“We’re proud of ourselves, but we’re not satisfied,” said Hughes after winning Game 6. That’s the general feeling that seems to permeate the entire Canucks’ lineup: a calm, steady head that neither rests on its laurels or gets too far ahead of itself, but stays focused on winning the next game

“We’ve played two elimination games already with our backs against the wall,” said Tanner Pearson, “so it’s the same attitude going into this one.”

According to head coach Travis Green, that comes down to consistent preparation and some core principles that have been repeated throughout the season.

“We talk about composure, confidence, wanting the puck, and I think if you have those words and you talk about those things throughout the season, when you get to a situation like [Game 7], you always have something to go back on and really rely on,” said Green. “As much as you are excited to play in these games and probably a little bit nervous, which is a good thing for me, do what you do. Do what’s got you here, do it well, and good things will happen.”

Game 7 encapsulates everything glorious and agonizing about hockey. Losing a Game 7 is crushing, because you came so close. Winning a Game 7 is such a release of tension, it’s like nothing else could ever match that feeling of giddy joy.

While other sports have Game 7s, there’s something about the chaos of hockey that makes the tension so much more palpable than the slower pace of baseball and the steady back-and-forth of basketball. Each of those sports has their own positives, but the manic energy of hockey makes a Game 7 an edge-of your-seat experience.

Then there’s 2011. Similar to 1994, the Canucks moved on from the first round against a hated rival in overtime of Game 7, with Alex Burrows providing the slay-the-dragon moment. Once again, it went to Game 7 in the Stanley Cup Finals, only to end in crushing disappointment.

Now, the 2020 Canucks have a chance to write their own Game 7 story. They may be young, but they’re calm, poised, and ready.