The hug that turned a foster kid into a son

Why, he asked, did she give a hug to other children in his kindergarten class every morning?

Teel had noticed him before, standing by himself in the school’s morning line-up, and smiled at his curiosity.

She explained that she ran a daycare and that, when she dropped the older children off at Ranch Park elementary each morning, she gave them a hug because their moms and dads were at work. She wanted them to know they were loved and cared for.

Nine years later, Andrew Teel has never forgotten how lucky he is or failed to realize what might have been.

In mid-November, the 900 people filling the Vancouver Convention Centre ballroom gave the 15-year-old Coquitlam teenager a spontaneous standing ovation when he received the Outstanding Youth Philanthropy award from the Vancouver chapter of the Association of Fundraising Professionals. Andrew had been nominated by Covenant House, for which he has raised more than $50,000.

Covenant House provides services and hope to young people who have fled abusive homes or who have aged out of foster care and Andrew knows that were it not for that hug, he could have easily been one of them. 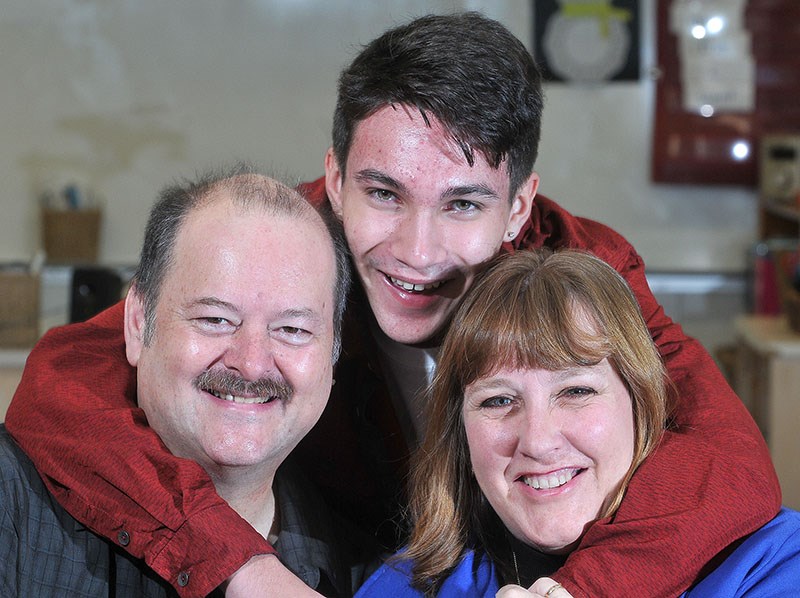 Andrew entered the foster care system early in his life. He was moved from foster home to foster home, sometimes as many as three times a month. By the age of five, he’d already had many bad experiences.

He wanted what all the kids around him had: someone to not only give him a hug every morning but also to hug him when he got home.

Sandy didn’t know any of that, not at first. She just thought he was a shy kid whose parents weren’t able to be there for him.

Every morning after that first meeting, she gave Andrew a hug and every evening she spent the dinner hour telling her husband and 17-year-old son Darren about this sweet little boy at school who, she would learn, was in foster care.

“You talk about this kid all the time,” Darren said after a couple of months. “Why don’t you adopt him?”

Sandy and Mark were floored. Ever since they had learned that Andrew was in foster care, they’d had the idea — just a whisper, really — of adopting him. But they had worried how Darren, after 17 years of being an only child, would react to having a younger brother.

But they discovered he thought it was a no-brainer. He knew his mother already loved Andrew and that Andrew needed a family.

“If he doesn’t have a family,” Darren said, “we should bring him into ours.”

It took everything Sandy had not to tell Andrew that they had started the adoption process. She managed to arrange an opportunity for Mark, who works for the B.C. Ministry of Citizens’ Services, to simply observe Andrew before meeting him. In no way did the Teels want to raise Andrew’s hopes in case the adoption didn’t go through.

Mark also had an instant affinity for the kindergarten student.

“Andrew looks like part of our family,” he told Sandy. “This little boy is part of us.”

Gradually, family services allowed Andrew to visit the Teels at their home. On the night of his first sleepover, Andrew became distraught at the thought of having to leave the next morning.

“He was just heartbroken,” Sandy says, “and I thought, ‘Enough trauma.’” She called family services that night to say Andrew was staying. “From that day on it felt as if he has always been here.”

Every year until he was 12, the Teels took Andrew on a Christmas adventure. It might be the Stanley Park train or meeting Santa Claus on the top of Grouse Mountain. Doubting he believed in Santa any more, they asked him if he wanted a different Christmas tradition.

He came to them with an idea: He wanted to collect items for a really big stocking to donate to Christmas Inside Out, an initiative for homeless people in the Downtown Eastside. He started a simple fundraising drive among his classmates and gathered enough toiletries, small gifts and treats to fill eight stockings.

On a cold and dark Christmas Eve, the Teels loaded the stockings into their minivan and went to Oppenheimer Park. Andrew was moved by the people he met and the compassion they showed one another.

“It was the best way ever to spend Christmas Eve,” Andrew wrote in a YouTube slideshow.

The next year, Andrew turned to his entire school and together they collected enough items to fill 30 stockings.

When he called the organizer of Christmas Inside Out, however, he learned that she wasn’t able to organize the event. Who would get the stockings?

Jennifer Hall, the development officer at Covenant House Vancouver, answered the phone when the Teels called the Drake Street drop-in centre to find out more about their services. When Andrew heard that many of the teens it serves had aged out of foster care or run away from abusive homes, he wanted to help.

“It just felt like a perfect fit for them,” Hall says.

As well as donating the stockings, Andrew started a new initiative called Toonies for Teens, adding an extra $308.

Last year, Andrew took it a step further. He talked to Hall and said, “Maybe Covenant House needs money more than it needs stockings.” He started a fundraising page on

Covenant House’s website, including a slideshow that talked about what it was like to be a young person without a home at Christmas.

The media picked up the story and, together with his new schoolmates at School District 43’s Inquiry Hub secondary school, Andrew’s Twoonies for Kids raised an astounding $49,451.

Andrew has no expectation that he can pull off such a feat again. He has set a modest goal of $1,000 for this year’s campaign.

Jennifer Hall, who nominated Andrew for the philanthropy award, says he knows what it feels like to not be part of a loving family. When he asked Sandy for that hug, “he just wanted to be loved, which is what everyone needs.”

She has been deeply impressed by Andrew’s mix of happy-go-luckiness and humble generosity.

“Andrew has had some pretty terrible experiences in his young life,” she says. “Sometimes, people go dark [but] he’s got something in him that makes him want to overcome it by doing something positive.”

YOU CAN HELP, TOO

• Covenant House is funded 94% by private contributions. If you would like to support Andrew’s campaign go to CovenantHouseBC.org.