In one Coquitlam co-op, a subsidy gap is leading to a massive $300 increase in rent this month; in a co-op 500 metres away, a lease set to expire in 2022 is threatening the very existence of 300 people's homes in a trend experts say will only grow over the coming year
Apr 25, 2021 8:21 AM By: Stefan Labbé 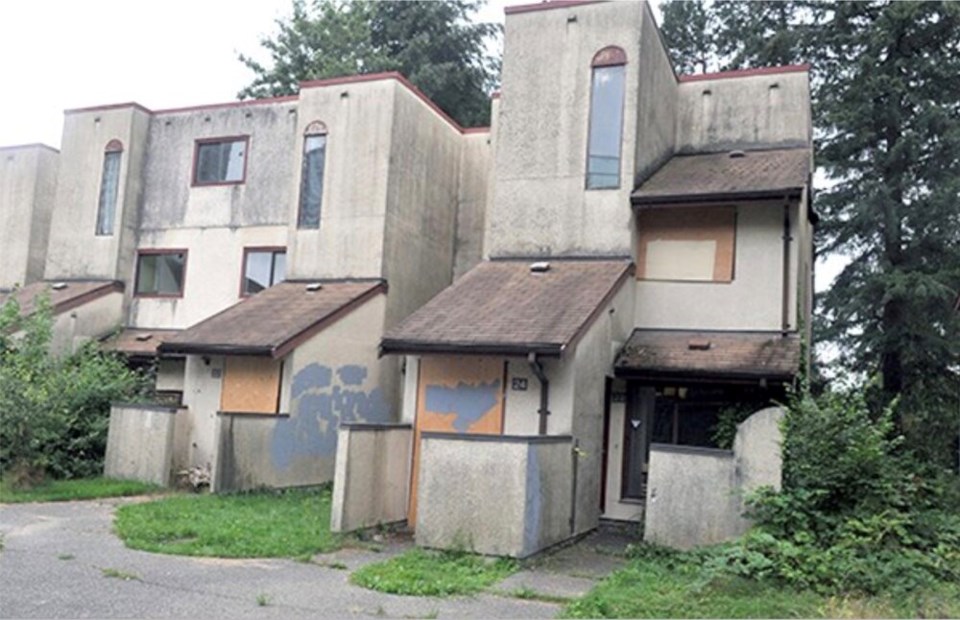 After these townhouses were torn down at Coquitlam’s Hoy Creek Housing Co-op, the reduction in rent received hurt the co-op board’s finances with CMHC, throwing them into debt, and triggering a financial rescue that cut off subsidies for residents.Tri-City News File Photo

Heather Beaudoin got her foot in the door at Coquitlam’s Hoy Creek Housing Co-operative 30 years ago with the promise of something better.

“You move in here, you have a fairly cheap rent and you save money to buy a house,” she said.

Then her husband got sick and their incomes stagnated. For the past three years, Beaudoin, now 70, has spent three days a week commuting to the doctor to manage her husband’s dialysis.

Every month, the retired couple ekes by, living in one of the run-down co-op buildings hit hard by the leaky condo crisis of the 1990s, said Beaudoin.

So when - earlier this month - a letter arrived at their door stating rent would go up by $300, they panicked.

But her situation also speaks to a wider generational gap in affordable housing as federal subsidy programs end and the townhouses and low-rise buildings of old housing co-operatives come to the end of their life — what some experts describe as a make-or-break moment for a pillar of affordable housing in the province.

Like many housing co-ops across British Columbia, Hoy Creek was part of a wave of low-income housing built with money from the federal government between the late '70s and the early '90s.

Many of those homes have fallen into disrepair and, in the case of Hoy Creek, the complex sustained a massive amount of damage as part of the leaky condo crisis.

The damage was so bad that in 2016 the co-op could not pay its bills after determining that 60 townhouse units on the property were uninhabitable due to mould, rot and bad plumbing.

The loss in members led Hoy Creek to fall into massive debt.

“They couldn’t sustain their mortgage payment and it got to the point where they would have been put into receivership,” said Thom Armstrong, CEO of the Co-operative Housing Federation of B.C.

Armstrong’s organization helped to pay off the debt owed to the Canadian Mortgage and Housing Corporation, and transferred the property into a community land trust.

But paying off the debt to the federal Crown corporation also ended its responsibility to subsidize rent for many of the Hoy Creek residents.

As the Hoy Creek Co-op moves to re-develop its land, converting the current 97 units into more than 450 new homes, the residents are facing the fallout of a subsidy gap that could put rent out of reach for dozens of residents.

“We found temporary assistance for them through the province for the last two years. But that ran out March 31,” said Armstrong.

LEASES SET TO EXPIRE FOR HUNDREDS OF LOW-INCOME RESIDENTS

Roughly 500 metres away from the Hoy Creek Co-op, two other housing co-operatives are facing their own existential crisis.

Both were part of that same wave of new affordable housing which built 240 co-ops across the province, including the Hoy Creek Co-op

But unlike Hoy Creek, which now controls the land it's set to re-develop, TriBranch and Garden Court were built on private land purchased by the International Union of Operating Engineers Pension Fund.

“Forty years ago, I bet everyone thought it was a great idea for a union based pension to have, as part of its social mission, investing in affordable housing,” said Armstrong.

“The co-ops merrily managed their communities for 40 years and now the union pension fund's trustees say to themselves ‘We have a fiduciary obligation to our pensioners to get a market return on the value of the property.’”

That means re-development, tearing down the old low-rise buildings and building up to squeeze the most value out of the land.

For the 250-plus people living at the TriBranch co-op, their lease expires in October 2022, a date Armstrong said the union, along with the developer Concert properties, are already eyeing with a preliminary redevelopment plan.

With about 18 months left on the lease, facing the end of a 40-year success story in affordable housing is a tough pill to swallow for a co-op that recently paid off its mortgage.

“They’re in a panic,” said president of TriBranch Dave Pylypow of his fellow residents. “This is home to many many people for four decades.”

Pylypow said he has spent the last three years calling on the province to help bankroll the purchase of the land and save it for affordable housing.

But letters to Premier John Horgan have gone unanswered.

“I just haven’t had any response,” he said.

A SCRAMBLE TO SECURE CO-OP HOUSING

Of the 267 non-profit housing co-ops in the province, more than 92% of them were developed under federal programs in the '70s and '80s.

Most of the co-op lease and subsidy agreements lasted 35 years, so that by the end of 2022, all 247 of the original federally funded housing co-operatives will have come to the end of those agreements, said Armstrong.

Without a stable or predictable federal subsidy stream to allow new development or new builds, Armstrong says every co-op is going to have to ask itself: How do we regenerate this housing for another generation or more?

The hurdles are huge. To knock down old buildings and fit more people on the same patches of land requires more access to capital at a time construction costs are sharply rising.

“We're going to need every bit of help we can get from every level of government — whether it be free land from municipalities, or relaxation of zoning restrictions, or waving of development fees — all the tools the government has in its toolkit to make housing more affordable, we're going to need them all,” said Armstrong.

In the meantime, Armstrong says quiet negotiations to re-enrol the residents of Hoy Creek Co-op into a CMHC’s subsidy program are ongoing and could bear results in the next couple of months.

“If CMHC makes the right decision, it will happen quite quickly,” said Armstrong.

If the co-op is turned down, Armstrong added “we’d try to find a way... it wouldn't be easy.”

While the Hoy Creek Co-op struggles to secure subsidies for its members in the short term, looking into the future, it’s relatively lucky, endowed with a large land base and in a prime location. All that sets it up to densify by building market housing on part of the property to fund a corner for a new and expanded co-op.

But co-operatives like TriBranch, which sit on leased land, face a bigger challenge, said Armstrong: convincing the landowner, developer and municipality why co-op housing should continue instead of some other affordable housing deal with a developer.

“I know Concert will say, ‘it doesn't matter. Affordable housing is affordable housing. We'll just build replacement rental homes and offer them to the members.’ But if you're a member of a co-op, it absolutely matters to you that you live in a co-op,” he said.

WHY DOES SAVING CO-OP HOUSING MATTER?

But another reason to push to save and expand the province’s co-op housing base is less tangible and has become increasingly important as people are forced to stay closer to home due to the pandemic.

“If you asked people why they moved into a co-op, they'd probably say they'd moved in because it was affordable,” said Armstrong.

“But when you asked them why they stayed, they'll say it's security of tenure, it's the community we have here, it's having a say in your housing and not being told by a landlord how things are going to work.”

Armstrong points to “a ton of success stories” where single parents, people with disabilities and new Canadians not only find a sense of community in co-ops, but improve their job prospects and education along the way.

“It's not just housing. You're building community, citizenship,” he said.

Then there are the seniors for whom co-ops offer the only shot at a dignified home.

For Heather Beaudoin, shuttling her husband to the doctor or hospital multiple times a week has been tough. Their home, however imperfect, has been the one constant.

Leaving, she said, would mean an even more run down home or something brand new and out of reach.

“There’s still a lot of fight in me,” she told the Tri-City News.

For TriBranch president Dave Pylypow, pulling the plug on a 40-year-old community is not an option — his fight is to finally get answers from province.

“They were making all these promises about co-op housing,” said Pylypow.

—With files from Gary McKenna