This app from a Tri-City company delivers more than pizza

Coquitlam and Port Coquitlam entrepreneurs develop the app Eloujn, which offers pick-up and drop-off of a variety of goods by contractors
Feb 23, 2020 8:25 AM By: Gary Mckenna 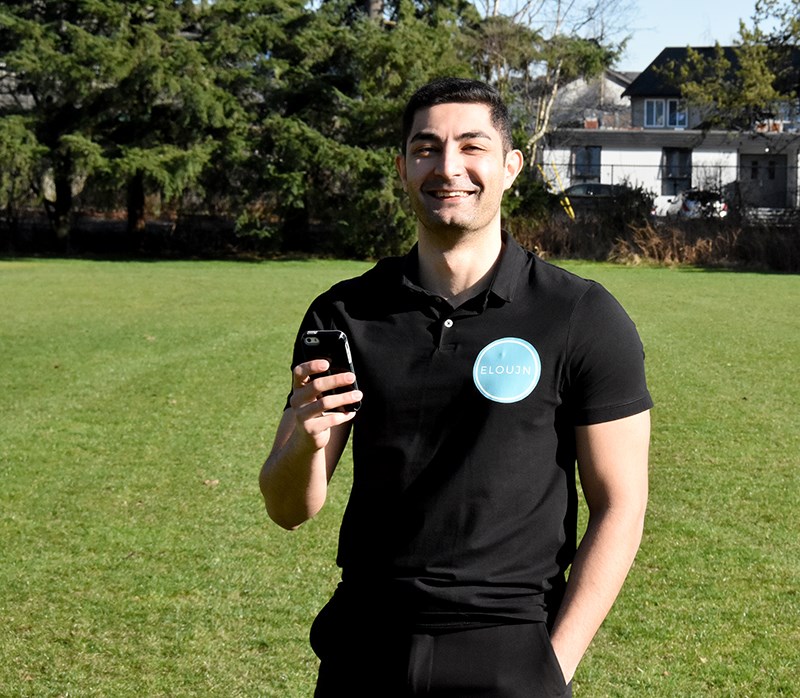 Milad Bonakdar, one of the two co-founders of Eloujn, said the app connects customers in need of items with contractors capable of delivering them.GARY McKENNA

Two Tri-City tech entrepreneurs want to become the Uber or Skip the Dishes of the delivery business.

Milad Bonakdar and Ruh Naimi last year launched Eloujn, which connects customers in need of items with contractors capable of delivering them. They say their app-based platform, which they recently demoed at the BC Tech Summit and the Launch Academy, is capable of "delivering anything, anytime," in Metro Vancouver.

"We have been working really hard on it," Bonakdar, a Port Coquitlam resident, told The Tri-City News. "We have gotten some good feedback."

Naimi, a Coquitlam resident, said she got the idea for the app while working for a company she felt was paying too much for basic office supplies. The delivery company charged a large markup on items such as pens, pencils and printer paper that she said could be purchased significantly cheaper at retail stores.

"It cost a lot of money," said Bonakdar. "She thought, 'Wouldn't it be a good idea if you could just order it and someone can go get it from Walmart or a dollar store or something?'"

A customer who has downloaded the app can post jobs on the site, outlining items they want picked up or purchased and how quickly they need the delivery.

Contractors can then decide to take the job, with the platform giving an estimated charge to the customer and the estimated earnings for the delivery person based on distance and the number of items. (For each transaction, Eloujn receives a fee based on the distance and the type of delivery.)

Deliveries are not limited to things that can be purchased in stores, though.

For example, Bonakdar said someone who forgot their hockey equipment at home and needs it brought to their office before the end of the day could use the service, as could people looking to pick up items they purchased on Craigslist.

Several flower shops and meal-prep companies have started using the app, which has been particularly popular in Vancouver and Burnaby, he said.

Contractors who do their runs exclusively on foot or bike provide Eloujn with a copy of their photo identification and a work permit while drivers must also upload their licence to the online profile. Based on the company's calculations, a person making deliveries could earn between $25 and $30 an hour and there is flexibility that comes with deciding on which jobs a contractor wants to take, Bonakdar said.

"You can make some extra money on your lunch break walking around downtown," he said.

Eloujn is starting to garner interest, with more people turning to the app to make their purchases and new contractors signing up regularly, Bonakdar said.

For now, the company is focusing on making the business model work in Metro Vancouver but the door is open to scale the platform up and bring it to other cities.

"Expanding is obviously a goal for us," he said. "We are working toward it."

• For more information go to eloujn.ca.