The incident occurred as conservation officers closed in on a family of bears that was “heavily habituated and food-conditioned”
Jul 31, 2019 9:11 AM By: Stefan Labbé,Grant Granger 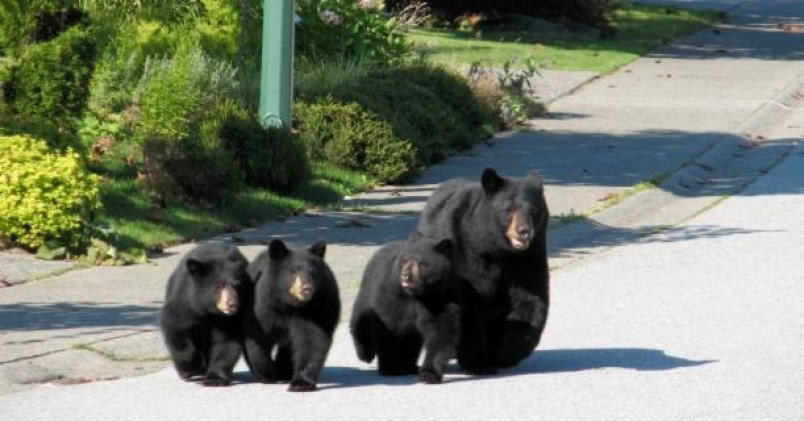 According to data from the organization’s Wildlife Alert Reporting Program, there has been a 45.9% increase in Coquitlam and a 137% rise in Port Moody in the first six months of 2019 compared to the same time period last year. Port Coquitlam’s numbers have fallen 25.2%.

Three Coquitlam residents were arrested Tuesday for obstructing conservation officers as they tried to capture a family of bears.

The incident happened at around 3 p.m. north of Mundy Park, near Baker and Sumpter drives, as the officers closed in on a family of bears that was “heavily habituated and food-conditioned,” according to the BC Conservation Officer Service (BCCOS).

BCCOS said it had received several calls over the last weeks about a black bear mother and two cubs in the area, according to Insp. Murray Smith, who overseas the Lower Mainland region. Over that time, the bears had lost their fear of humans and become conditioned to eating non-natural food sources like garbage.

Conservation officers arrived Tuesday afternoon as the bears were once again leaving an unsecured garbage can. When officers tried to direct the bears up a tree to tranquilize them, two men and a woman from the neighbourhood started interfering with the officers, Smith said in a media conference call Wednesday.

The three Coquitlam residents got between the bears and the officers, prompting the officers to call in Coquitlam RCMP, Smith said.

The three individuals were arrested and charged with obstructing the conservation officers under the Wildlife Act.

Tony Faccin, one of the Coquitlam residents arrested, said his sons, aged nine and 11 years, were playing outside when he heard yelling and he looked out to see conservation officers running with shotguns. He said the mother bear and its two cubs weren’t acting aggressive even “with four officers running like crazy with shotguns.”

“I yelled, ‘Don’t shoot the bears. There’s kids around, what if you miss?’” said Faccin “I don’t want them to shoot the bears. I’ve been living here for three years, I’ve seen them constantly. They just walk around and don’t do a thing.”

After he was arrested, Faccin said he was in the back of a police car when an officer asked Faccin to show him the video. Faccin said after he unlocked his phone and accessed the video, another officer took it out of his hand.

(Smith said officers followed protocols in the same way any police body does.)

“I think it was just a ploy to get me to unlock my phone,” said Faccin. “I’m hoping the news [coverage] will get my phone back and then I’ll release the video. I’m not afraid to show the video. Maybe they are, but I’m not.

“They acted like I was physically obstructing them from killing [the bears] and that’s not the case at all.”

Faccin was released at the scene on a promise to appear for a court date in October and report to police for fingerprinting on Aug. 12.

Faccin said his sons were upset to see their father arrested. “They were terrified."

The two seven-month-old cubs were malnourished and underweight when they were found, Smith said. They should weigh about 50 lb. at this time of year, Smith said, but they weighed half that.

Conservation officers later tranquilized and euthanized the family of bears.

A total of eight bears have now been euthanized in Coquitlam this year, with three relocated. That’s a fairly standard for this time of year, said Smith.

“Conservation officers never ever gone into this job to destroy wildlife. We only got into this job to protect it," he said. "But public safety is the first mandate of the [BC] Conservation Officer Service. And in this case, the bears were given every chance and… it was continually the situation with unsecured garbage.

"The conservation officers didn't put the garbage out, you know, it was members of the public.”

According to data from BCCOS's Wildlife Alert Reporting Program, there have been 725 reported bear sightings in Coquitlam, Port Coquitlam and Port Moody so far in 2019, up 31.1% from the 553 in the Tri-Cities last year. Port Moody has seen the biggest spike, rising 137%, while Coquitlam’s numbers have jumped 45.9% and Port Coquitlam's have fallen 25.2%.