The Crown corporation filed a notice of motion with the Canada Energy Regulator to be exempt from the city's tree bylaw for its pipeline expansion project
Jan 8, 2021 2:56 PM By: Dustin Godfrey 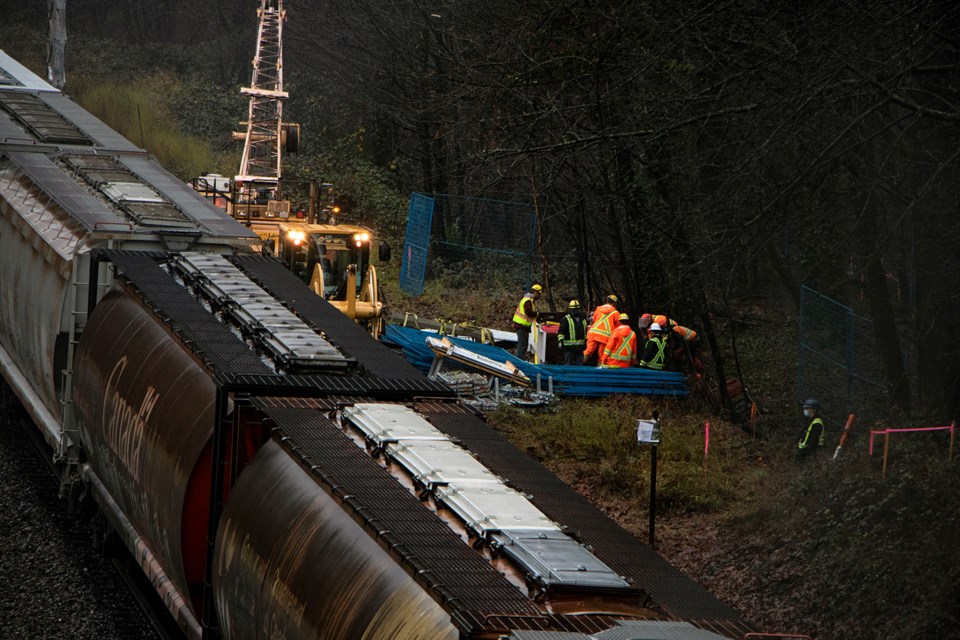 Trans Mountain contractors begin work the morning of Wednesday, Dec. 9 at a key location for anti-pipeline demonstrators. Dustin Godfrey/Burnaby Now
Trans Mountain is seeking to bypass City of Burnaby permitting requirements to tear down more than 1,300 trees on public and private land.

Trans Mountain filed the notice of motion and constitutional question motion on Dec. 15, seeking an answer from the Canada Energy Regulator as to whether the pipeline project should be exempt from municipal approval to remove trees.

The question considers constitutional matters of interjurisdictional immunity and federal paramountcy, each of which gives federal matters leeway within or superiority over provincial regulations.

In its submission, Trans Mountain offered 10 exhibits to favour its case, including a letter from parks and recreation director Dave Ellenwood to Trans Mountain land acquisition director Alain Parise. In the letter, dated Nov. 16, 2020, Ellenwood wrote in response to an “early works” request for access to land around Brunette River to remove trees on city lands.

“This letter is to confirm that the city opposes removal of trees on city lands at the proposed access points,” Ellenwood wrote.

The 1,308 trees only include those with trunk diameters of 20.3 centimetres or more, the threshold at which the city begins to require permits for removal or other work.

Trans Mountain also cited a March 2018 Federal Court of Appeal decision declining to hear a City of Burnaby appeal of an earlier ruling by the National Energy Board, the predecessor to the CER. In its decision, the NEB determined the Trans Mountain pipeline expansion project was exempt from city approval per the tree and zoning bylaws.

In an email statement to the NOW, the city said it could not yet comment on what its position would be on the CER matter.

The city, as well as landowners and Indigenous communities, have until Tuesday, Jan. 12 to file notices of intent to participate in the hearing, and any participants in the hearing are required to submit evidence by Monday, Jan. 18. Trans Mountain is required to file any further evidence in response by Jan. 22, with a videoconference to take place by the end of the month.

A decision will be issued within 10 days of the hearing.