The solution may be touchless garbage cans, according to a recent petition, and the city is looking into the possibility
Dec 1, 2020 1:25 PM By: Diane Strandberg 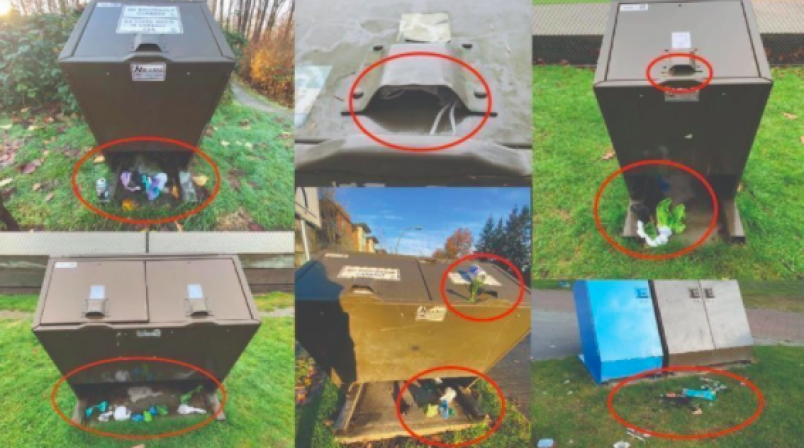 Dog waste bags pile up next to Port Coquitlam trash bins. People have been complaining about the problem and the city is now considering contactless options. Photograph via CHANGE.ORG

The solution may be touchless garbage cans, according to a recent petition, and the city is looking into the possibility.

The problem seems to have started during COVID-19 when concerns about the virus spreading through touch turned people off while using the city’s bear-proof bins, which are opened by placing the hand inside a cover and undoing a latch.

In some cases, the hand latches are stuffed with things that could be contaminated such as disposable masks, tissues or plastic bags.

To avoid coming into contact with these items, people are dropping their dog poop bags onto the ground.

And that’s making for extra work for city workers and a mess in city parks, prompting solutions and complaints on Facebook.

Resident Bonnie Suen has started a petition on change.org to get the city to install new garbage cans that are opened using a foot pedal.

She writes that the waste bins are hands-free, thus reducing the transmission of bacteria or viruses. They are also resistant to animal tampering and, if installed, would reduce the number of complaints, thereby freeing up time and resources for city staff to address other issues.

According to parks staff, the problem has grown in recent months, requiring workers to step up collection frequency and put out messaging to park users.

In the meantime, the city is also investigating the foot-activated garbage cans to ensure that they can function well and also be bear safe. “The long-term goal could be replacing the cans with the touchless alternative,” the city wrote in an email to the Tri-City News.

But the new cans won’t come right away.

“Given the significant costs associated with a full-scale replacement program, staff have chosen the more fiscally responsible approach to consider replacement alternatives as cans are replaced due to age and condition,” the email continued.

The city is also reminding residents that leaving dog waste bags at the foot of trash bins promotes littering, wildlife attraction and is against city bylaws. To minimize contamination from high touch points such as lids of waste cans, residents are encouraged to:

• Pack out waste and dispose of at home

• Use gloves or an empty bag to activate the can latch

Residents can also report any concerns or problems to portcoquitlam.ca/report or using the city’s PoCo Sort/Report App.