A Port Moody gym was the first to de-affiliate with the fitness brand in the Lower Mainland after the company failed to speak up on protests against police brutality and systemic racism. Then came a two-word Tweet from the company's CEO.
Jun 12, 2020 4:37 PM By: Stefan Labbé 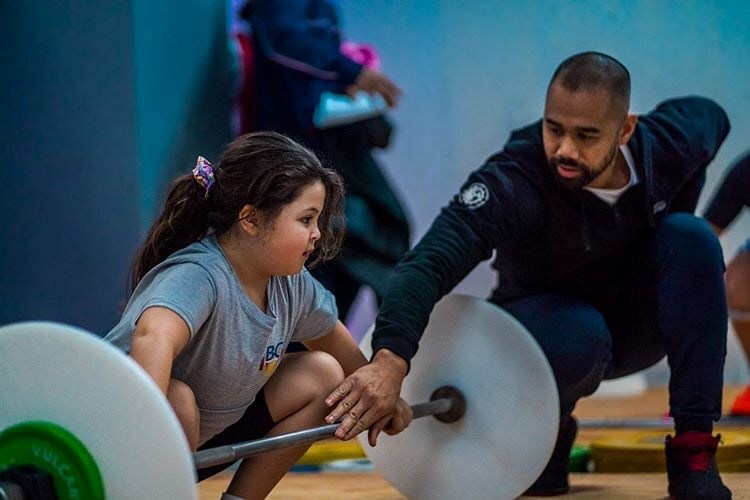 A coach helps a girl train at Engineered Bodies in Port Moody. It was the first gym in the Lower Mainland to sever ties with the CrossFit brand following silence over the killing of George Floyd and the ensuring protests.Engineered Bodies Strength & Conditioning/Facebook

Several CrossFit gyms across the Tri-Cities have severed their affiliation with the brand following a series of controversial Tweets from the company’s founder and longtime CEO Greg Glassman.

On Saturday, the research firm Institute of Health Metrics and Evaluation tweeted: “Racism is a public health issue.”

Glassman replied on his Twitter feed: “It’s FLOYD-19,” a reference both to COVID-19 and George Floyd, who died May 25 after a white Minneapolis police officer pressed a knee into his neck for nearly nine minutes. The incident, captured on video, sparked worldwide protests calling for an end to police brutality and wider systemic racism. Four Minneapolis officers were arrested in his death.

Glassman’s Tweets sparked a backlash online, which only gathered intensity after Buzz Feed News reported a private Zoom call hours before the controversial Tweets, in which Glassman told employees “We're not mourning for George Floyd — I don't think me or any of my staff are.”

On Tuesday, June 9, Glassman announced he had decided to “retire” from his position.

The string of incidents has provoked several gyms across the world to sever their relationships with the CrossFit brand, including at least two in the Tri-Cities.

CrossFit, an exercise brand that incorporates movements such as high-intensity interval training, Olympic weightlifting and power lifting, was founded by Glassman and Lauren Jenai in 2000 in Santa Cruz, California.

Gyms pay an annual affiliate fee on a sliding scale depending on the year a gym signed up. The affiliation fee for Canadian gyms was $4,068 this year ($4,455 in Quebec).

Affiliation allows use of the CrossFit name, advertising benefits and inclusion in the CrossFit Open, a competition for gyms worldwide that is the first qualifier for the global CrossFit Games. Since 2013, the Tri-Cities have hosted the CanWest Games, a qualifying event held at Coquitlam’s Percy Perry Stadium that by 2018 claimed to be the largest functional fitness event in Canadian history.

But that hasn’t prevented local gyms from taking a stand against the CrossFit and its corporate headquarters.

Even before Glassman’s Tweets, at least one Port Moody gym claims CrossFit has had a problem addressing diversity for years.

A day before the Glassman’s comments, Port Moody’s Engineered Bodies released a statement condemning CrossFit as one of the organizations that have “remained silent” as protests raged.

“To be silent in the face of racism and discrimination, is to be complicit,” they wrote, before declaring they would be ending their affiliation with the company.

“We were the first ones in the Lower Mainland,” said Anthony Agtarap, owner of Engineered Bodies. “That was prior to everyone else jumping ship.”

Within days, Rocky Point CrossFit wrote in a statement that Glassman’s “deplorable comments” against the current movement to end systematic racism and police brutality made their decision “easy to make.”

“Black lives matter!” wrote the company’s operators before noting they will be severing their affiliation with CrossFit while changing “very little” at the gym.

Other Tri-City CrossFit gyms say they are looking to push for change from within the company.

Greg Zeitler, who owns and operates CrossFit CBC in Coquitlam, released a statement to his members Tuesday denouncing Glassman’s behaviour but taking a “wait-and-see” approach when it comes to severing ties with the brand.

“It is an all-inclusive sport designed for everybody,” Zeitler said in an interview with The Tri-City News. “It doesn’t see colour, race or gender. It’s always been something promoted as something everyone can get involved in.”

“That is sort of why the words of CEO back last weekend really hit home and hard for a lot of people.”

Zeitlar said he wants to see a sea-change at the corporate level and has taken “a step back from HQ” until that happens.

“We’re waiting to see what are the real actions they’re going to take. So far, we haven’t seen much,” said Cesar Polanco, one of the gym’s owners.

“You can’t have the head of the ship speaking that way,” said Polanco. “It’s crazy for a sport that’s all about community around the world.”

Sheepdog has been supporting and inspiring our community to be more active and healthy since opening our doors in 2011. . . We are front line first responders, we are tactical athletes, we are moms and dads, we are brothers and sisters, we are athletes of all ages, colours, gender, religion and sexual orientation. In short, we are a community who strive to be better! . . The recent comments made by Greg Glassman, DO NOT align with our core values and as a result we are discontinuing our affiliate relationship with CFHQ. . . We hope that CFHQ will do the right thing, the moral thing and address the actions of the CEO accordingly. . . We are proud to be associated with the people, boxes, and the brands that made this community what it is. We will continue to be a part of this amazing community. . . Crossfit is not a man, it's all of us! . . #SHEEPDOG #CommUNITY #FunctionalFitness #SheepdogFamily #TeamSheepdog

Just how many gyms across Canada and the world have ended their relationship with CrossFit is not clear. Agtarap, of Engineered Bodies, said so far he estimates roughly 1,200 have severed ties with the brand, less than 10% of the nearly 15,000 CrossFit gyms worldwide.

Still, he said the movement is just gaining steam, and his gym is already moving to be more proactive in addressing access to the sport for the Lower Mainland’s Black and Indigenous communities.

“Historically, Black, Indigenous [and] people of colour live in marginalized communities... it's a luxury that's typically unattainable for those communities,” he said, adding that he’s now working with a city of Coquitlam councillor to award scholarships for local Black and Indigenous youth to train, and perhaps, work towards a career in the fitness industry. The gym is also looking to develop an annual grant through the Coquitlam Foundation to launch young peoples' careers from those communities.

As for what the future of CrossFit gyms looks like without the support from headquarters, Agtarap was unequivocal: “It’s just a name, a brand. It’s not something we’ve ever said we can’t survive without.”

— with files from Darron Kloster, Lori Ewing and the Canadian Press

1961
‘What are they waiting for?’ asks Coquitlam parent worried about long wait for school isolation letter
1523
New garden centre hopes to take root in Port Moody
1523
Parent says Port Moody minor hockey not giving a full account of its COVID cases
1446
Every Canadian household to get free, pre-paid postcard
1109
Dentists, midwives and more approved to assist in B.C. vaccination clinics