One tank was found when police pulled over a truck in Maple Ridge; the other was located when a Surrey scrap yard owner phoned the RCMP after recognizing the equipment from media reports
Oct 23, 2020 2:01 PM By: Gary Mckenna 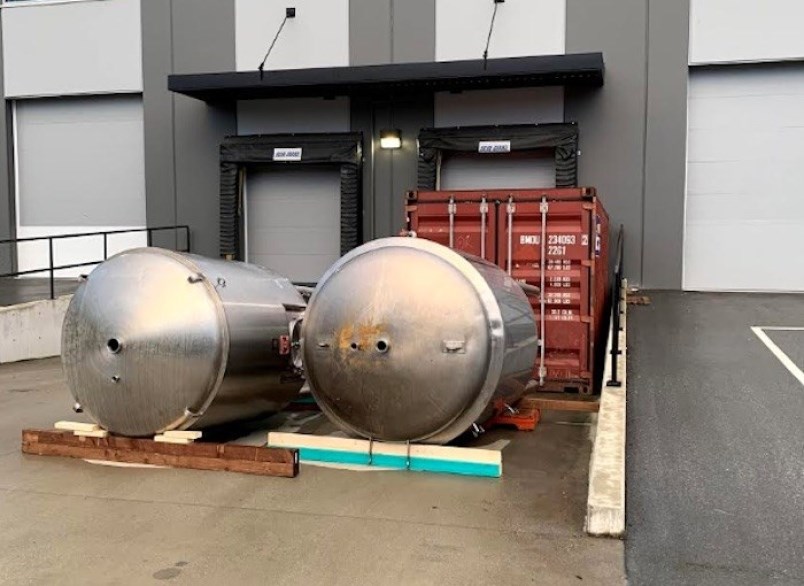 These two tanks were stolen from outside Boardwalk Brewing's under-construction facilities in Port Coquitlam.PHIL SAXE/BOARDWALK BREWING

Two giant beer fermentation tanks stolen from a Port Coquitlam craft brewery last week have been located and returned to their rightful owner.

The equipment, valued at more than $40,000, was a little banged up, according to Coquitlam RCMP Const. Deanna Law, however the proprietors of Boardwalk Brewing were relieved to have them back.

“That’s a lot of money, especially when you are starting up a business,” Law said. “One had a little more wear and tear than the other. They have been sent off for inspection, according to the owner.”

The first tank was found on the back of a truck police pulled over in Maple Ridge on Oct. 18. The second was located on Oct. 21 when the owner of a scrap yard in Surrey contacted the RCMP after someone dropped off the fermenter, which they recognized from news reports about the theft.

Law said police have identified several suspects, but the investigation is ongoing and no arrests have been made.

But in an email, brewery owner Phil Saxe said the recovery of the two tanks was bittersweet.

“The tanks are now on route to a fabrication facility in Penticton for damage assessment and repair. Unfortunately, it appears that they may be damaged beyond repair,” he said.

“Although this has been a set back for us we are looking forward to the moment when we can open our doors to our community and share a pint.”

Boardwalk Brewing was in the process of installing floors at their new Seaborne Avenue brewery when they temporarily left the two fermenters behind the building.

The two tanks, which weigh one-ton each and are approximately 16-feet tall and six-feed wide, were left under blue tarps when the theft occurred.

Police believe the tanks were stolen in the early hours of the morning sometime between Oct. 16 and 19. Because of the industrial nature of the neighbourhood, the sight of people loading the tanks onto trucks may not have appeared suspicious to people passing by.

Law said while a theft of this nature is unusual, business owners should be mindful of protecting expensive equipment. Surveillance cameras should be in proper working order and anything of values should be stored securely, she added.

Anyone who sees anything suspicious in their neighbourhood can call the Coquitlam RCMP non-emergency line at 604-945-1550. Those who wish to report information anonymously can call Crime Stoppers at 1-800-222-8477 or go to their website at www.solvecrime.ca.

-With files from Stefan Labbé and Lindsay William-Ross