The directive comes as B.C. residents and businesses look to a re-open under the province’s Phase 2 easing of restrictions.
May 20, 2020 10:16 AM By: Stefan Labbé 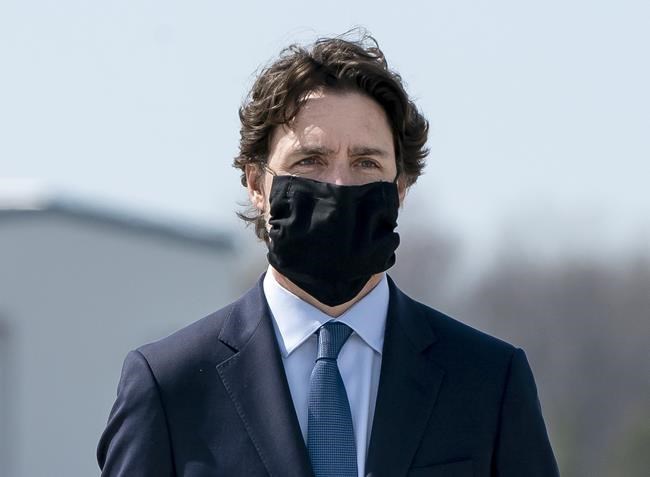 Prime Minister Justin Trudeau wears a mask at a repatriation ceremony for the six Canadian Armed Forces members killed in a helicopter crash off of Greece during Operation Reassurance, at CFB Trenton, Ont. on Wednesday, May 6, 2020. Trudeau says a national recommendation on when and where Canadians should be wearing face masks is coming later today. THE CANADIAN PRESS/Frank Gunn

In the early days of the pandemic, public health officials did not recommend wearing non-medical masks, a position that changed in early April after Dr. Tam said they could be worn as "an additional measure" when it became clear COVID-19 can be spread by people who aren't showing symptoms. At the time, Tam stopped short of offering an official recommendation on wearing non-medical masks.

The prime minister has been seen in recent days wearing a mask himself. When asked to clarify, Trudeau said “everyone’s situation will be different,” but that when it’s not possible for him to keep two metres distance from other people, “that is what I choose to do.”

The prime minister said he wears a mask while walking through the halls of Parliament but that when he sits down to debate, the two-metre distance between him and other MPs is reestablished and he removes the mask.

“That’s my personal choice,” he added.

Spain is now requiring people to wear masks when in public, but so far most Canadian public health officials have only recommended it be done in circumstances where physical distancing is not possible.

Here in British Columbia, provincial health officer Dr. Bonnie Henry said in April that non-medical face masks will not protect someone from getting infected with the virus.

"But for short term, it is a similar analogy to coughing into your sleeve or coughing into a tissue,” she said. “It is not a recommendation, it is a permissive use, if you will.”

Several businesses in the Lower Mainland have already asked customers to wear masks when entering their premises, including the T&T Supermarket at Coquitlam Centre and several Starbucks locations.

— with files from the Canadian Press