With only an 87-vote margin, BC Liberal candidate beats NDP's Jodie Wickens to represent the riding
May 23, 2017 2:32 PM By: Diane Strandberg 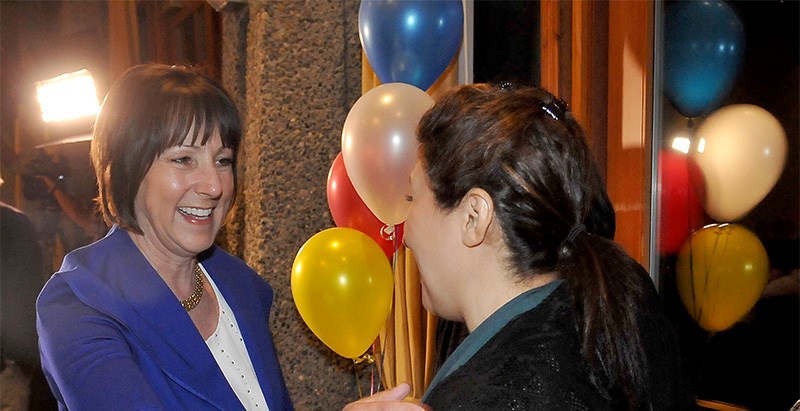 Coquitlam-Burke Mountain MLA-elect Joan Isaacs took the seat from BC NDP candidate and incumbent Jodie Wickens, according to Elections BC, after a day of absentee ballot counting. Here Isaacs greets a supporter on election night.Tri-City News

The final count in the 2017 provincial election shows BC Liberal candidate Joan Isaacs narrowly edging out incumbent and BC NDP candidate Jodie Wickens to take the Coquitlam-Burke Mountain riding.

Although Isaacs' lead was reduced from 215 earlier in the day to 87 by 5 p.m. Tuesday, according to the BC Election's website, she still eaked out a squeaker win.

The shifting vote totals during the final count this week also solidified the leads for Port Coquitlam MLA Mike Farnworth and for Coquitlam-Maillardville's Selina Robinson, another BC NDP MLA.

But Coquitlam-Burke Mountain — a former BC Liberal stronghold — was one of six B.C. ridings that party officials were watching closely as, theoretically, their outcomes determine who will form a government.

Currently, Christy Clark's Liberals are one seat shy of a majority government with 43 seats while John Horgan's NDP have 41 seats and the BC Green Party under Andrew Weaver has three seats.

Last week, Isaacs’ election-night lead of 170 votes over Wickens jumped to 268 due to what Elections BC termed as a "transcription error." Afterward, the NDP launched a request for a recount but Elections BC declined.

Meanwhile, Farnworth's campaign manager told The Tri-City News his team strategically went after absentee voters — that is, those who had mobility issues or who would be away on May 9.

"We did as a campaign team make a concerted effort to reach out to them to encourage them to cast their votes in advance," Brad West said. "Our job in the campaign is to maximize the vote and we did."

As a result, Farnworth broke through the 14,000-vote mark. And he will have the highest percentage and highest raw vote total of any winning provincial candidate in Port Coquitlam's history, West said.