A Vancouver tech company envisions thousands of jobs in a digital production precinct it's pitching for Port Moody.
Feb 25, 2021 4:32 PM By: Mario Bartel 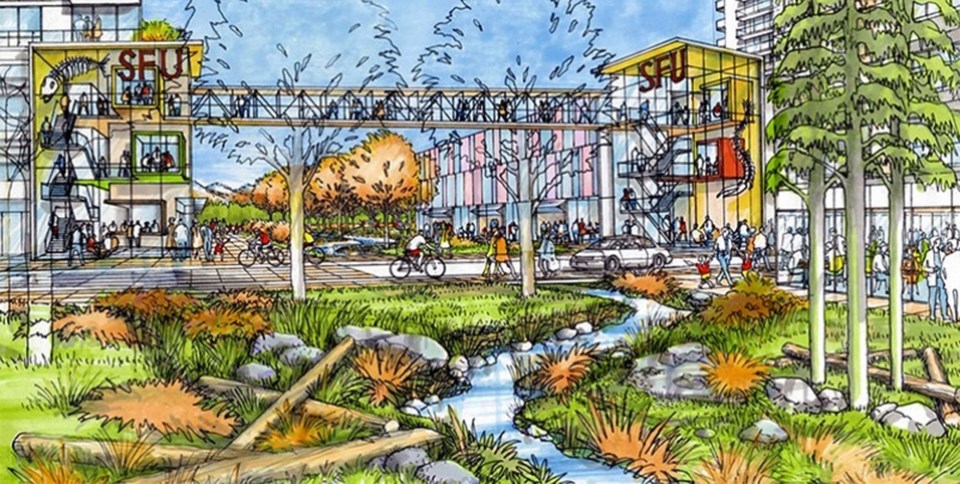 An artist's rendering of what a daylight Slaughterhouse Creek might look like as it bisects a new urban neighbourhood in Moody Centre. SUBMITTED

A Vancouver tech company says the area around Port Moody’s Moody Centre SkyTrain station would be a perfect location for a digital production precinct.

In a report to be presented to the city’s economic development committee next Wednesday, James Hursthouse of AMPD Technologies, a company that specializes in advanced cloud-based data centres, says the construction of virtual sound stages, studios, offices, co-working spaces along with facilities for allied academic institutions as part of a massive redevelopment of the neighbourhood to include residential and commercial components as well, has the potential to turn Port Moody into “nothing less than a carbon-zero, live/work city of the future.”

Hursthouse said a consortium of digital creators of movies, video games, interactive content and mixed-reality technologies, as well as a data centre, would have the potential to bring at least 2,000 high-paying jobs to the city. He pointed out the average annual salary of employees working in digital media in British Columbia is $84,000.

“The existence of the production facilities and the data centre within the precinct would also catalyze a mix of start-up and more established companies in the games, digital media and mixed-reality sectors,” he said, adding they would use Port Moody as their main base of operations or as satellite facilities.

Hursthouse compared his vision to the Canadian Motion Picture Park in south Burnaby, where 300,000 sq. ft. of production stages and support facilities, including 18 sound stages, create work for up to 2,000 people when it’s fully booked. But, he added, Port Moody’s “easy access to nature and the beautiful scenery,” as well as “convenient transit and airport access” along with the capability of ultra-high-speed internet and 5G connectivity, make it even more desirable.

In January, a consortium of nine property owners and developers seeking to transform 23 acres of light industrial and commercial space immediately adjacent to the Moody Centre SkyTrain station made its first formal presentation to council. But they were told the plan for high-rise condos with up to 4,135 new homes, commercial and offices space for approximately 2,000 jobs, as well as a 1.75-acre public plaza, needed more green space and more jobs, along with less density.

Hursthouse said his company is already working “with a select number of entertainment partners” looking to establish large virtual production facilities that could be amalgamated in Port Moody, complementing the consortium’s redevelopment proposal.